DREAM Activist Describes Fear After Alabama’s HB 56: ‘I’m Not The Only One’ 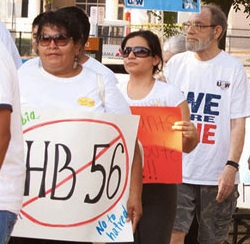 By Julianne Hing, originally posted on Colorlines.com on 10/18/11. Families are fleeing Alabama, teachers are comforting the panicked children who are still in school, and crops are rotting in the state’s fields. Welcome to life in Alabama in the age of HB 56.

Just three weeks after Alabama began enforcing what’s been called the nation’s strictest anti-immigrant state law, the country is beginning to see just what happens when states create and enforce their own restrictive immigration policies. While the 11th Circuit Court of Appeals issued an emergency stay that blocked the state from enforcing a provision mandating public schools track the immigration statuses of their students, other provisions are still in effect, including one that requires law enforcement officers to ask for a person’s papers if they have “reasonable suspicion” to believe they’re in the country without legal status.

Last Friday, the Department of Justice headed down to Alabama and dropped in at a community forum to gather stories from the community about the law’s impact. We caught up with Victor Palafox to talk about life in the post-HB 56 era. Palafox is a 19-year-old student organizer and undocumented immigrant who was at both the community forum and a hearing the DOJ held next day.

What has changed for you since HB 56 went into effect?

Life has been very turbulent. It’s very difficult for other people to understand the feeling that the parents you love so much might not make it home from work that day. It’s something that one cannot comprehend but that one is realizing every single day. Fear is a very prevalent, very tangible thing, but at the same time there are very immediate circumstances which propel that fear forward.

Down south, I live in Birmingham, but I have a cousin down in Koby, which is a place near Mobile. It’s one thing to hear about discrimination and another to have an immediate family member live it. He decided to stick it out and see how long he could last. He went to work one day and one of his coworkers started attacking him. [The coworker] started verbally abusing him, started provoking him, saying, “You dirty Mexican, what are you doing here? I thought this law got rid of y’all. Get out of here while you still can.”

Photo from colorlines.com, by Steven Ross.

Did the announcement of last week’s emergency stay on two provisions of the law change the mood for folks?

When I heard it, I equated it to putting a bandaid on a bleeding amputee. This entire [law] needs to be blocked in its entirety. People need to realize what kind of effect this is having, not just on the state but on the rest of the country. Alabama is not the last fighting ground. South Carolina is next and unless we make a stand in these states it is going to continue elsewhere.

Can you say more about the hearing with the Department of Justice held last week, and the stories that people told?

We were hearing from different parts of the state. We had a professor from a law school, businessmen, politicians, judges, advocates, it was all over the board. It was completely overwhelming just how immediate and how quick the consequences of the law were being felt.

One of the instances that I can remember is having a mobile home park rather down south try and deny these people housing and trying to go up and beyond what the law itself dictated. People are trying to get people to leave when they knew they had no right to do so. The cases in which this law has been abused and misused are in abundance. It only gets worse when you hit rural Alabama. Down south, kids go to school crying because they don’t know if they’re going to see their parents when they go home. One school took it upon themselves to ask every single Hispanic student for their papers.

The worst part is to realize it’s only going to get worse.

Before, farmers weren’t as vocal, but now they are seeing the effects, that it could affect their livelihood. The construction [industry], too. What we’re trying to do is unite. Unite Alabama regardless of race, regardless of ethnicity, regardless of immigration status.

One of the things we’re missing is the human element. When you hear undocumented immigrants, you don’t see: friend of 15 years, or worker of seven, or family man of 20. You are really dehumanized when it comes to undocumented immigrants. I’m not the only one. There are thousands of people in the same situation as I am.