Get in the game... Strategy for your board 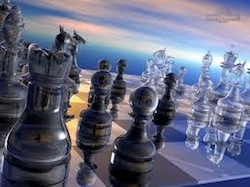 In considering triumphant philosophy within the genesis of organizing any just cause, I submit to you an analogy based upon the game of chess. It is my hope, that you will consider the possible strategic implications, and fit them to your own need.  At least I would love to start a conversation, to identify each piece, be it person or organization, who would best fit the below scenarios.

The opponent king is the most important piece on the board, they are the ultimate target of your discontent. He, she or they, are usually very slow to move. Often there are restrictions as to what the king can openly do, since the king is the most public figure on the board. This king is slow to react, and by him, her, or itself, cannot go very far at one time, that is why he depends a great deal on the other pieces on the board for his protection.

In the matter of life, he moves his pieces using money, manipulation or serious threats. The king will sacrifice anything and anyone to evade capture. To an unjust king some pieces are more useful than others, but none as important to the king as himself.

Your king is the most important ally to you. He or she is usually someone with privileged information, good judgement, and a high risk of having a “heart attack" while in the hot tub. While to the opposing king, everyone and everything is simply a pawn, to the just king everyone and everything is his responsibility. He usually has no fear, and speaks truth quite readily. If your king is lost, the battle may not be over, but your struggle will have been severely crippled. Your king is imperative in combating the other king, but must under all circumstances be protected, because first and foremost the opponents king and all of his other pieces, will be after him or her first.

The object of the game, which is most notably not a game, is to trap the opponent's king so that escape is not possible. Your goal is to hold the king accountable, and demand action from him to fix the burden. By this way of thinking, perhaps the best strategy in dealing with the king is to eliminate the other protection pieces on the board.

For this reason, it may not be in your best interest to go after the king immediately, but through a series of  “checks”. Ultimately, you “check” the king by controlling the space and players surrounding the king - this understanding will take you a long way toward the ultimate “checkmate,” which you know you will have achieved when the king in weak enough, alone enough, cornered enough, to buckle to your demands - as they are, ultimately, in his best interest at that point.

Note: The idea that most eyes will be on your king, if strategically noted, and if proper action is taken, can be very helpful to you in sneaking in a proper attack from other sources.  I suggest that you use the advantages of the weaknesses of their king, and the strengths of your king (and other folks - please read below) to lay out a well thought out plan of advance.

The queen is really the most powerful piece on the board. She can attack anyone, anywhere at anytime. Her (his or its) only mission is to protect the king, at all cost. In life, this person or organization, is handsomely rewarded by the king. They have a near intimate relationship. The king depends on the queen, but both full knowledge that if the shizzle hits the fan, the queen will and should sacrifice herself for the king.

Your queen is someone within your fight who has a large amount of information. She or he is loyal, and completely trustworthy. They are in it to win it, and will protect YOUR king at all cost. Queens are versatile, they can act in many capacities. They are often well spoken, thoughtful, energetic and fierce.

The good news is that because the queen is so valuable, the king will try and protect her a bit more. Her power can in some cases become a weakness, since the king will often pull the queen in immediately after a move. The best thing that can happen to your cause, is if the king tries to protect the queen, and you can successfully take down the queen. That connection to the queen, you see, can ultimately hurt the king in a variety of ways.

Note: Counter attacking the queen mandates a skilled use of all the other pieces on your board.  The king must be surrounded, and the opponent’s queen must have been moved into a position where she is separated from the king, whether the king comes to protect or not.  Your queen’s only major missions are to protect your king, and to communicate and empower the other pieces on the board.

The Rook strategically stays within their own little sphere of influence, they can only make a move laterally or longitudinally. Real world meaning? They protect the king by chiming in on usually one very distinct issue. It could be science, health, politics, etc., but they never leave their realm of expertise. On issues of rhetoric, it really doesn’t matter if the rook is telling the truth because he, she or they, are so one focused, people tend to take them as experts. They protect the king by constantly sweeping across the board, within their line of influence, which is usually by submitting a report. Rooks are constantly preparing and submitting reports for review, these reports back up the view of the king - regardless of where the truth lies.

Your Rook is best to fight their rook. The rook is a formidable opponent to anyone outside of the rook's area of interest. Therefore, it is best to leave the work of taking out the rook, to other rooks (or a bishop - see below). A group of them preferably. What you can do, as an organizer, is reach out to other rooks, who care, and then get out of their way and let them set to work.

The bishop can sweep the length of the board on many issues. Bishops are usually more political in that they can comment on many issues and still carry a lot of weight - even if their only allegiance is to the king. The bishop is powerful. They can take out a large number of pieces, including rooks, in a short amount of time. The bishops provide the power to the rook, usually in the form of endorsement and/or money. It is usually the bishop, in the real world, who selects the rooks - with the advice of the king, of course.

Your bishop is a gem. Countering the bishop takes time, and strategically based maneuvers. Bishops usually gain strength toward the end of the game, after the rook has submitted their reports.  But keeping your eye on the bishop is smart, lining up your own bishops is smarter. Although I suggest letting your bishops go after the opposing king and queen.

Note: In my opinion, the best way to take down a bishop, in the real world, is with pawns. Pawns are great at standing in the path of the bishop. And well placed, intelligent, empowered pawns can stop the opponent's bishop cold - a steady attack by the pawns is death to a bishop.

The knight is like a stealth plane, you do not see them necessarily until they are on top of you. A knight jumps easily between topics, they are more independent than any other piece, either completely bought by or have an actual heart felt allegiance to the king.  A knight comes into play when a sniper is needed, meaning the knight gets in, does its job, and gets out. A knight is usually quiet except when needed, dormant except when called to action - a knight gives no speeches.

Your knight is one of your best supports for your game. A knight tends to be a bit of a loner, however, he or she is highly respected, fiercely loyal, and for those reasons can pass between and work with a high variety of groups very diplomatically.  Your knight will usually provide support and resources to all other pieces on the board, without hesitation. He or she is a jack of all trades, and incredibly effective.

Note: If you are affronted by a knight, it means you are making progress- it also means you must be very aware. Especially since the knight can attack anyone on the board, except usually another knight (because they tend to be hyper vigilant of each other), and usually walk away unscathed - meaning, there will be no reciprocal attack from the same piece. For that reason, like a bishop, pawns are very effective when combating a knight. Surrounded by pawns, a knight will become paralyzed.

Historically, when we think of a pawn, we think of the lowest man on the pole. We also think of powerless individuals, who are easily sacrificed. And that is partially true - at least, to the opponent's king and pieces. Opponent pawns are by and large flack catchers. Their job is to sit and listen to you, and be the buffer for the king, queen, and other pieces. They are also fall guys.

Note: When approached by a opposition’s pawn, meet them with dignity, they probably do not receive respect often. In some rare cases, they can even become allies to you and your movement. Although, I would advise that you not take them into confidences. They are not your friend, they are the opponent’s pawn. And although that is sad, it’s how they are playing the game.

We are all pawns - to the opponent, we are in the above sense of the word. But here is the deal, the power of the pawn is actually the greatest on the board, and it is to great advantage that the opponent does not know this. In some cases, by voting and boycotting, we actually have power over some of the opponent’s best pieces. Even in chess, one pawn can checkmate a king, if the game is played well. Thousands, and especially millions of pawns, are completely undefeatable. Thus pawns can, and must, support each other in attack or defense. A pawn, or pawns, can block an attack, drive away other pawns and pieces, inspire through sacrifice, and empower through movement. In reality, the greatest number of pieces on the board are pawns - 8:1 in chess. Therefore, in truth, the entire board belongs to the pawn.

POWER TO THE PAWN!

God Bless and best wishes for a triumphant game.

P.S. On the board of recompense for the people of the Gulf Coast with regards to the BP Deepwater Catastrophe - Feinberg and the GCCF is most undoubtable a queen. If you can, this pawn is asking you to join us in our coup against them on November 7 in Washington D.C. The info for that event is here.. http://www.facebook.com/event.php?eid=131031420332755. Hope to see you there.