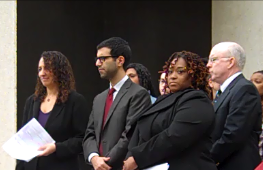 This week the local organization Women With a Vision (WWAV) is celebrating a huge step forward in their fight on behalf of low income women and lgbt people of color in New Orleans. For almost four years WWAV has been campaigning against the discriminatory Solicitation of Crime Against Nature statute.  As a result of these efforts, the Center for Constitutional Rights filed a lawsuit Tuesday calling the law unconstitutional.

The law has disproportionately impacted women of color, primarily low income African American women. Ninety-seven percent of women registered as a sex offender must do so as a result of a Crime Against Nature conviction. And 80% of people on the registry due to a Crime Against Nature conviction are African American. Women With A Vision has partnered with local and national groups to bring attention to this issue and support the women, and some men, who are targeted by this injustice.

On Tuesday, attorneys filed a lawsuit on behalf of nine anonymous plaintiffs convicted under Louisiana’s Crime Against Nature law and forced to register as sex offenders as a result. The attorneys, WWAV, and allied organizations held a press conference at the New Orleans federal courthouse, and a telephone press briefing Wednesday morning.

A member of the youth lgbt project Breakout, "Tatiana" (not her real name) describes her unjust arrest for Solicitation of Crime Against Nature.

Excerpts from the press conference:

At the press conference, Executive Director Deon Haywood shared these important words on behalf of the dozens of people who have turned to Women With A Vision for help with this issue:

"I work with the people directly affected by this statute every day: the toll it takes is devastating. WWAV has been standing with the women of New Orleans, no questions asked. We’ve been let into worlds that few others see, and trusted with stories that few others hear. This issue first came to our attention in 2007 when a woman first came into our office and showed us her driver’s license with the big orange SEX OFFENDER on it. Since then we’ve heard dozens stories from women who are on the registry because of this charge.

"Women who have struggled with addiction, violence, trauma, and poverty all of their lives and haven’t been able to get the services they need are now even more shut out.  No DV shelters, drug treatment programs or homeless shelters will take them.    These women are no danger to anyone, yet they are treated as predators of the worst kind – all for just offering certain kinds of sex for money. In virtually all the cases we have heard of, that is all they did – they never even performed any sexual act before they were arrested. Now they are being forced to pay a terrible price. They have served their time, but now they have to serve an additional sentence, in many cases a life sentence."

"I applaud the courageous steps being taken by the plaintiffs of this lawsuit challenging the constitutionality of Louisiana’s Crime Against Nature Statute.  The disproportional harm caused by Solicitation of a Crime Against Nature charge disrupts lives and families, often resulting in:

"The public demonization and the complete disregard of the health and safety of women of color impacted by this statue entraps them in a dangerous cycle of violence, poverty, and criminalization. The sex registry mandate condemns them to a vicious cycle of excessive fees and restricted access to jobs due to discrimination, which leads to the possible need to engage in high-risk choices, thereby exposing themselves to daily violence just to comply with the law. The challenges faced by women of color, who are maliciously marked as ‘sex offenders’ by the state because of their sexual behavior, profoundly affects their health and safety and severely limit their access to resources, thus regulating them to a lifetime of shame and fear."

Andrea Ritchie, a private police misconduct attorney and co-author of Queer (In)justice, who is co-counsel on the lawsuit, highlighted the specific groups most hurt by the discriminatory charges of the statute:

"In New Orleans and across the country, women of color and transgender women are routinely profiled as being involved in prostitution, and often report that they can’t walk down the street without being picked up for loitering for the purposes of prostitution. That’s bad enough when it’s a misdemeanor. In Louisiana, on a second offense it’s a felony, and requires registration as a sex offender for 15 years to life.

"Not only are the individuals we are talking about today survivors of rape and domestic violence, they are also survivors of police violence, including sexual harassment, physical abusive, improper strip searches, and rape by law enforcement officers. As one of our clients told us: “I was raped and used many times myself, and I never hurt anyone – why am I on the registry as a sex offender?"

Rosana Cruz, board member of Women With a Vision and Associate Director of VOTE (Voice Of The Ex-offender), spoke about the dual stigma faced by formerly incarcerated people who are registered sex offenders:

"Every day dozens of New Orleanians come home from extended periods of time in jail or prison. They face obstacles that make it nearly impossible to find jobs, rent apartments or to access sorely needed resources like educational loans or housing subsidies.  We know that many of them also face discrimination because of their records.

"But the brave women and men who have stepped forward today face an even more insidious roadblock. In addition to having the social stigma of having been in the criminal justice system, they also have to contend with a modern day scarlet letter, a sex offender charge emblazoned across their id cards. For years after their release, those red letters continue to close doors in their faces. Instead we should help them to clear a path for their success, as they struggle to make a new and better life for themselves and their children."

The plaintiffs in the case chose to remain anonymous for fear of retaliation.  They all must carry a state driver’s license or non-driver’s identification document emblazoned with the words SEX OFFENDER in bright orange capital letters.  They must disclose the fact that they are registered as a sex offender to neighbors, landlords, employers, schools, parks, community centers, and churches. Their names, addresses, and photographs appear on the internet.  They are required to mail postcards notifying every person in their neighborhood.

Said one plaintiff, “When you mail those cards it’s so humiliating, people kill you for that. I fear for my safety.”

Said a mother of three who was convicted under the statute in the 90’s, “Because my picture and address are up on the internet with my charge, a guy once came by my house looking for sex.”

Attorneys on the case include Bill Quigley and Alexis Agathocleus from the Center for Constitutional Rights, private police misconduct attorney Andrea J. Ritchie, Esq., co-author of the recently released book Queer (In)Justice: The Criminalization of LGBT People in the United States, and Davida Finger of the Stuart H. Smith Law Clinic of Loyola University New Orleans College of Law.