Lessons the government could learn from my feet 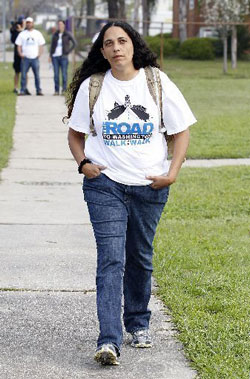 The number one question everyone has asked me since my walk to Washington D.C. is, “How are your feet?”  They are fairly good. Although I do still get the “hikers wobble,” usually early in the morning or if I sit too long.

That’s where you hop up like normal, only to have the bottom of your feet remind you that you recently abused them. The good news is that the cure for “hikers wobble” is hiking - meaning after a few steps the pain dissipates and soon there is no affect at all.

As for the looks of them, that’s another story. I did get several really nice size blisters and those have either calloused up into hard, gopher-mound-like entities, or they are peeling off. Looks like my days as foot model are over, for a while at least.

Honestly, if it wasn’t for the help of my friend and running partner, Drew Landry, I would be in worse shape than I am. Every night he would check my feet and do what had to be done to keep them in walking shape. I’m not sure if you have ever encountered feet fresh from a sock after a 30 mile asphalt march, but if you want to discuss toxicity in the environment - Drew might have something to say. To his credit, he never complained about it, in fact I can safely say I never would have made it without his assistance in that area.

I remember one time in particular, on the second day of walking, when I came in and was just done. I fell across the bed and went straight to sleep - I don’t even remember touching the bed really.
I woke up, and he had taken my shoes off and was washing my feet with a cold cloth. Sister Teresa couldn’t have been more appreciated than he was by me, at that moment. It’s biblical, you know. It’s servitude. It’s compassion, friendship, love, honor and a host of other words that mean - he’s just a really good dude.

More than that, you could say that what Drew did for me is a testament to what should be happening with the BP disaster, and other man-made and natural disasters all over the world.

You see Drew couldn’t walk that path for me, I mean he joined me when he could, but ultimately it was my walk (in the context that it was with shared allegiance, and in deepest love and respect for the people, animals, cultures and ecosystem of the Gulf Coast, of course).

When it came down to it, I had to walk it.

Same can be said for an area affected by a tornado, flood, oil catastrophe, terrorist act, etc., it is the people there - those that live, breath, raise a family, work and die in that area, that have to suffer through it.

Of course, as a society - and following the requests of our spiritual prophets and universal conscience, it is our duty to aid in whatever way is needed. But ultimately, no one can know or be affected in the same way as the one who is in it up to his neck. We can all empathize, but we can never really know, until it happens to us.

We can also never really know what is needed within that certain community. Every place has a breath to it. A special fingerprint that is undeniably and culturally theirs. To not recognize that is foolish on another’s part.  And man, is our government foolish at times.

Take that meeting I mentioned earlier in D.C. with the Gulf Coast Ecosystem Restoration Taskforce (GCERT), Heath and Human Services (HHS), the Center for Disease Control (CDC), the Coast Guard, and other governmental entities, who are positioned to provide aid for the continuing health effects of the dispersant and crude oil mix.

The lady from the HHS said that she had continuously told people to call Poison Control and let them know the affects they are suffering. Yet, she explained, few had. She asked, in earnest, “where is the disconnect?”

Here’s the deal, people here have no reason to trust the government enough to believe they will be helped by making the call. If you couple the perception, true or not (and it is true, from what I've seen), that very few “leaders” outside of the Gulf of Mexico care about the Gulf of Mexico, with the lack of formal outreach of information that has been provided to the public, you can figure very few of us have Poison Control on speed dial.

Five (no, six after the tornadoes, WAIT– No, seven, if this flooding gets as bad as they say) major natural and man-made disasters in five years have happened on the Gulf Coast. And we have yet - YET, to see the government - Republican or Democratic, perform in a way that has been honest as to the injury, let alone competent as to the remedy.

Often times instead of letting us “walk our walk," and then yielding the blessed cold, wet, wash cloth - they come in and essentially take our feet out from under us.

Instead of empowering the community to steer the way in their own recovery, they essentially tie us to a chair and then leave, saying something about there not being enough funds for cold water. Of course, if we file a forty page application in triplicate, we may have a chance of speaking for three minutes to the new commission, appointed by the President, on foot care, whose report will be made available in two years.

Also, there will be a new study, funded 50% by your sock, that eventually might be able to tell you if the blisters you have are painful.

But don’t worry, to raise awareness while you wait, they made these nice flyers that say “Feeling bad cause your feet hurt? You may need to talk to someone about that.” Or better yet, “Feet hurt? Well, it ain’t our fault.”

In their defense, it is hard to give real options for an answer to questions they refuse to ask. Such as, “What has made a large number of people who cleaned the spill or live on the Coast, horribly ill, since April 20th of last year? And how can our organization do its job, in a timely manner, and get them some health care?”

Asking those questions - acknowledging the need, is the first step to calming the pain and setting communities on their feet again.
Follow that up with the cloth of compassion, salve of action and a bandage of prevention - and you got yourself a walker.

Only then can we all say, “Even if it’s not pretty, and there is still a little ‘wobble’ now and again,  someday soon, we are going to be ready to dance.”

************
Cherri Foytlin is an oil worker's wife, mother of six, Louisiana resident and journalist whose family has been deeply impacted by the BP Oil Disaster and consequential moratorium on deep water drilling. She co-founded Gulf Change, blogs for www.BridgeTheGulfProject.org, and walked to Washington D.C. from New Orleans (1,243 miles) to call for action to stop the BP oil disaster.  She has been a constant voice, speaking out to the Obama Administration's Gulf Oil Spill Commission, and in countless forms of media.  Cherri will continue her fight for the industries, people, culture and wildlife of south Louisiana and the Gulf Coast "until we are made whole again".