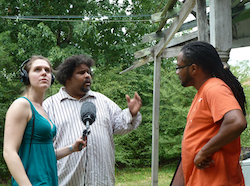 "After Hurricane Katrina ravaged the area, Mississippi Gulf Coast residents were forced to come together to deal with the aftermath. Then, just as they were starting to get back on their feet, the BP Deepwater Horizon disaster dumped millions of barrels of oil into the water just off their shores.

Cumulatively, these events have made environmentalists out of a whole lot of Gulf Coast residents who may not have considered themselves as such…

We tell an hour of stories about the fight for the natural world Gulf Coast bringing residents together, both with one another and with unlikely partners—and how, in some instances, that fight is turning out to be exactly what a community needed to survive."