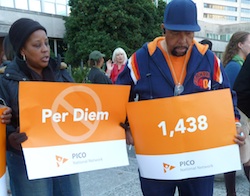 On November 29th, a coalition of over 30 local organizations delivered a petition with more than 2,200 signatures to Mayor Mitch Landrieu, calling for reform of Orleans Parish Prison.  Specifically, the petition demanded that the Mayor formally commit to capping the size of the new facility being built by the Sheriff’s Office at 1,438 beds, and that the City Council end the “per diem” budget system for the jail.  Under the “per diem” system, the Sheriff’s budget is set per person per day they’re held in the jail, creating an incentive to keep people in jail for longer.

The petition delivery happened just days before the City Council was set to vote on the Mayor’s budget, which included the Sheriff’s budget for the jail.

Thank you for your passion and energy regarding this extremely important issue. I am committed to transforming New Orleans’ criminal justice system and a right-sized jail is an important piece of the puzzle. Throughout the last year my administration has initiated a transparent public process regarding the prison facility. This open dialogue has been constructive and is still ongoing.  I look forward to continuing this work together.

This condescending response is completely devoid of any mention of the 1,438 cap or the per diem system. We at OPPRC fear that the Mayor’s non-committal stance is an indication that back-room deals are still being cut, in order for the Sheriff to build a larger facility.

The fight over the jail size has been going on for more than a year.  One year ago, in response to mounting pressure from a diverse range of community groups and individuals, Mayor Landrieu convened the Criminal Justice Working Group, to determine the size of the new jail facility. The Working Group recommended the City cap the number of beds at 1,438, and the New Orleans City Council included this number in the ordinance that approved zoning for the construction of the new jail facility. But Mayor Landrieu has made no formal commitment to adhere to this recommendation.

The time for a formal commitment from the Mayor has come.     “You can’t bring a group together to answer a vital question and then just abandon the answer that they offered when it becomes politically inconvenient,” said Norris Henderson, Executive Director of VOTE (Voice Of The Ex-offender), a member organization of OPPRC (and the organization I work for). “The fact is that OPP needs to be reformed and it needs to be smaller.  We believe the Mayor should listen to the thousands of individuals who signed this petition and commit to the cap. New Orleans doesn’t need more than 1,438 jail beds.”

The proposed cap would still leave New Orleans at 43.8% more jail beds per capita than the national average, even if the city reaches a population of 400,000.

The City Council responded to the petitions by committing to end the per diem system within the year.  At least they appear to be taking the issue more seriously then the Mayor.  But the time for action to stop New Orleans’ over-incarceration is past due.

New Orleans is at a crossroad. The Mayor can listen to the thousands of people, locals, criminal justice experts, crime victims who are asking for a brighter, smarter way forward, or he can choose to keep New Orleans in the dark ages, home of America’s largest jail. Let’s invest in real justice, Mr. Mayor. Save the city’s resources and invest in things that prevent crime, not this jail that has only made our crime problem worse.

Related: Watch Denis Soriano explain why the per diem system must be changed.