Notes from the Road 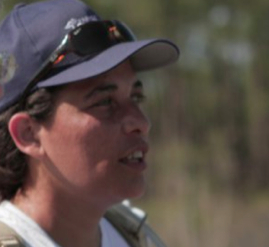 Well, the walk is well under way and I have been wanting to write to you all and tell you the wonderful things that have been happening, as well as the discouraging things I have learned. Until now I just have been too pooped to pop.

First thing is that I have seen some wonderous and amazing things. We have a beautiful country.

Secondly, I had no idea just how far reaching the impacts of the spill has been to our people. I really thought that once I turned north at the coastline there would be less devastation. Unfortunately, I was wrong about that.

Everyday I have been walking through communities that seem to be in real trouble - up until now most have been severely injured by this ever continuing event.

While still on the coastline, I met fishing families who have seen the environmental devastation first hand. They showed me photos and specimens of dead wildlife, live fish with no eyes, burn holes on crabs and shrimp and much more.

They teared up with me about the economic loss and a claims process that is just plain unfair and unjust.

I'll never forget the older Cajun fishermen who held my hand, and with tears in his eyes and voice cracking, asked why we (our team) cared so much about him. It was humbling to say the least. When I told him we loved him, he gave us hug and said he loved us too.

My wish for you is that over your lifetime you get a chance to have that feeling, of the smile and connection with others that we have been so blessed to experience on this trip. I now know that Connections are the key to this mission. We are trying to make more of them everyday.

At a fantastic B&B in Mobile, the couple there told us they are selling it because they can't afford the payments.

We learned that our Vietnamese families are taking classes and signing documents that they cannot understand at times. They are being assigned lawyers without their knowledge. That they are systematically being excluded from their fair due.

Through out Alabama the education system has been suffering. I have learned that here sales taxes provide greatly for the education system. From Mobile to Montgomery past Tuskegee, our children do not have pencils, toilet paper and other needed supplies - let alone gas for their school buses. Teachers are being fired. If anyone can help to adopt a school in those areas to collect supplies, I am sure that would be greatly appreciated. One public official told me that a large portion of available funds are not being funneled down to the smaller communities - he said trickle down does not work.

In Repton, the Governor has sided with citizens to help stop the largest toxic waste dump from being put in. Their fight is not over, but it's a testament to what people can do when they work together.

The devastation to our ecosystem is undeniable as well, from the coastline to the heart of the country.

I keep thinking back to Pass Christian, and every other large body of water along the coast that is inundated with dispersant and oil.

We walked Long Beach in Mississippi, and in one 15 mile stretch we counted over 200 dead jellyfish, 25+ dead fish of all kinds, 20 dead birds, 1 dead eel and 2 dead rats. I have never witnessed so many lost animals on our beaches.

Walking by miles of clear cut pine was not a favorite sight of mine, like some very wise person said a few weeks ago there's a difference between a tree farm and a forest.

Still, this journey is about the people we are meeting along the way.

As we continue, we are all the more dedicated to the fundamental truth that clean water and clean air is a God given human right and that anything less is in fact a HUMAN RIGHTS VIOLATION.

All the reports of new oil coming into our beloved coast has been disheartening, to say the least. It was not over before the new oil came in, and the liability of the last year should not be overlooked.

There is strength in numbers. I invite you to join the movement, let's walk the walk...

************
Cherri Foytlin is an oil worker's wife, mother of six, Louisiana resident and journalist whose family has been deeply impacted by the BP Gulf Oil Spill and consequential moratorium on deep water drilling. She has been a constant voice, speaking out to the Obama Administration's Gulf Oil Spill Commission, and in countless forms of media. On July 15, 2010, in a CNN interview, she called out to the president for help, but was unanswered. She has also spoken at "The Rally for Economic Survival" and at the "Spill Into Washington Rally" in Washington D.C.where she challenged the American people to get involved in what she sees as an "atrocity on the shores" of the Gulf Coast. In addition, Cherri has written and illustrated a children's coloring book on coastal erosion. Cherri will continue her fight for the industries, people, culture and wildlife of south Louisiana and the Gulf Coast "until we are made whole again".