Plight of the Oyster Catchers 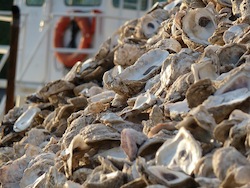 By Zack Carter and Paul Nelson, South Bay Communities Alliance. Originally posted in the Mobile-Press Register.  One day last month, we arrived at the Fowl River docks and saw several oyster catchers in soaking-wet clothes. Their boats — which were participating in a federally funded oyster replanting project — had just sunk in the swells of nearby Mobile Bay.

One of them said he had waved and hollered for 30 minutes before anyone noticed him standing on his capsized boat surrounded by whitecaps. He had lost several sacks of harvested oysters, his cell phone and his wallet, and easily could have lost his life.

He was trying to find other fishermen to go back out and help get his boat off the bottom. Raymond “Pete” Zirlott, who was docked nearby, offered to help but could not maneuver his shrimp boat close enough.

When asked if they could help raise the boats, one of the Marine Conservation officers present for the project explained they are not allowed to salvage and can only assist people to safety. He concluded, “Luckily, no one was injured.”

Those lucky to have made it back to the dock, shivering and wet, included experienced Asian, Hispanic and Caucasian fishers, many of whom still bear the last names of the French fishers who settled on Alabama’s coast 300 years ago. But their luck on that particular day — Wednesday, April 6 — had been tested unfairly. Many had signed a petition (along with 100 other oyster catchers) which was hand-delivered by Pete Zirlott to Gov. Robert Bentley a few days earlier. It stated, in part: “A large barge needs to be used to transport oysters for safety reasons; smaller boats (avg. oyster boat is 18-25 feet in length) are going to be at risk trying to transport the oysters down the bay where it gets rough and risk sinking.”

Two large barges were used for the same program last year at the harvest site, and have traditionally been used for generations. In addition to the risks, the extra fuel — for the 15-mile trip in open bay waters from the harvest site to the planting site — reduces the oystermen’s earnings.

Now their boats (as many as four, from the latest report we received) are on the bottom of Mobile Bay. This was these men’s livelihood, which has been steadily sinking since the Katrina and BP disasters.

Many fishers have reported to the South Bay Alliance that: they earn about 10 percent or less than what they made before the BP disaster; they are still fighting for fair compensation on their BP claims; and many are still sick after having been exposed to BP’s oil and dispersant — especially those who had to clean it up with pool dip nets instead of the efficient and safe TVA oil water separators that should have been used. Many fishers are also among the 700 families in Mobile County who qualified in 2007 for a HUD Emergency Katrina CDBG grant but have yet to be fully funded by the U.S. Congress. One of these families — oyster catcher Shirley Goleman and his wife, Linda — was recently visited by HUD Secretary Shaun Donovan himself. We, along with dozens of longtime leaders among the oyster catchers, have conferred with Gov. Bentley’s staff several times in recent days, as well as Sen. Ben Brooks and officials of the Alabama Department of Conservation and Natural Resources, regarding these inequities and lack of safety. The talks have in some ways been productive, but still no transport barges have been ordered. That’s why we felt it necessary to write a public letter to Gov. Bentley, Sen. Brooks, Conservation Commissioner Gunter Guy Jr. and Marine Resources Division Director Chris Blankenship, raising the issues cited above and concluding with a suggested long-term solution.

In a nutshell, we believe that the April 6 oyster boat sinkings are one among many examples of why commercial fishermen should be represented by an oyster commission made up of fishers and marine biologists, rather than the current one-man “oyster czar.”

Our letter points out that oyster reefs are “the great natural filters of our coastal waters, as well as a prime economic resource,” meaning that the reefs’ survival — and the survival of their stewards, Alabama’s oyster catchers — is a “concern for all of Alabama’s citizens.”

In fact, on April 5, at South Bay’s Coden Coastal Response Center, several oyster catchers demonstrated they have the commitment and know-how to participate in such a commission.

They approved and then followed a 1.5-hour agenda during a meeting with three representatives of the Marine Resources Division. After the agenda items were covered, the fishers and the conservation officers continued their discussion, informed by NOAA charts of Mobile Bay’s oyster reefs provided by Raymond Zirlott.

Their talks focused on the history and the future conservation of Alabama (and neighboring Mississippi) oyster reefs, and lasted until 7 p.m.

These people are indeed stewards of our oyster reefs. We respectfully ask that they be recognized and treated accordingly.