Poverty Skyrockets in New Orleans: 65% of Black Children Under Age of Five Living in Poverty 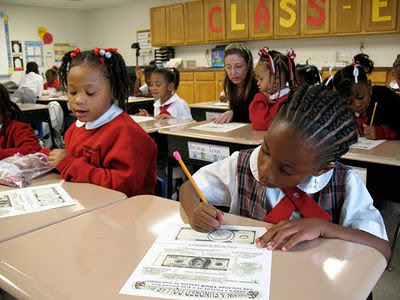 By Lance Hill.  Crossposted from Justice Roars. On September 22 the Census Bureau released information from their 2010 annual American Community Survey based on a poll of 2,500 people in New Orleans. Not surprisingly, the report was ignored by the local mainstream media since it speaks volumes about the inequality of the Katrina recovery. Despite the billions in post-Katrina federal dollars for building schools, streets and bridges, and homes, the New Orleans poverty rate has actually increased back to the highest level since 1999. The survey revealed that 27% of New Orleans adults now live in poverty and 42% of children.

This recent development reverses the temporary decline in poverty rates reported in 2007 and 2008 surveys when the poverty rate was nearly cut in half compared to pre-Katrina numbers. Those early declines in poverty were probably the result of large numbers of low-income African Americans who could not afford to return or lacked housing and employment. The new spike in poverty, despite the increase in overall education levels in the city, may signal that blacks are not sharing equally in the employment benefits of recovery dollars. Indeed, the city may be creating a new generation of chronically unemployed poor who were previously part of the low-wage working poor.

When President George Bush waived the prevailing wage provisions of the Davis-Bacon Act following Katrina, he provided employers with a financial incentive to hire low-wage outside temporary workers. State contracts to rebuild storm-damaged schools have provided little employment for black storm victims. The new rise in poverty can be attributed in part to the exclusion of local blacks from recovery jobs, including rebuilding school facilities and school operations. It is self-defeating to attempt to solve the long-term public education problems while children and their parents are pushed deeper into poverty by education agency employment and contracting policies.

Separating out the numbers by race shows a profound and growing racial inequality. While the overall adult poverty rate is 27%, black poverty is nearly double the white poverty rate: 34% compared to 14%. The child poverty rate of black children under five years old is an appalling 65% compared to less than 1% for whites. The Census Bureau data indicate that there are 9,649 black children under the age of five living in poverty in New Orleans in contrast to only 203 white children.

But what is truly stunningly is that the survey indicates that that while there are several thousand African American males ages 12 to 15 years old living in poverty, the survey could not find a single white male in the same age bracket in poverty.

With all the triumphal rhetoric of New Orleans as a city rising from the dead, the Census Bureau data offers the harsh truth that that some have risen while others have fallen. We act at our own peril if we ignore these troubling developments; the problems of education and youth crime and violence cannot be solved as long as local blacks are unfairly deprived the economic benefits of the recovery and the recovery jobs for rebuilding the city.