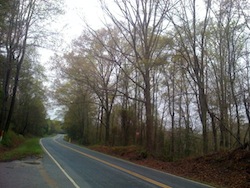 More than a month after returning home from her walk to Washington, D.C., Gulf Coast mom and advocate Cherri Foytlin thanks all of the people who made the trip possible. She walked to D.C. from New Orleans to call for action to end the BP oil disaster.

There is no way to walk in this world alone. By design, and from the point of conception, we are dependent upon another to even exist, let alone to thrive. The road to Washington D.C. was no different in that respect.


From the first moments of conceptualization, the walk to Washington belonged to everyone. On days when we would get tired, and thought we could go no further we, the crew of 10 dedicated folks involved, would name off people that we knew that we were walking for, each step became a name of someone here in the Gulf who had been affected by the spill - either economically, spiritually or medically.


The crew of the walk consisted of some of the greatest people I will ever know, and the people that we met with, or were joined by, along the way were not only an inspiration but a true example of American and global fellowship.


I remember one day in particular, in North Carolina, when I was at my lowest. By then we had been shot at in Alabama, experienced a tornado, lost a day for medical reasons, experienced car trouble, dealt with the law on two separate occasions and generally felt demoralized.


We were also in physical pain, and we were exhausted. And in that moment I was not only wondering if we were going to make it, but my whole heart burned with want for my kids and home. I can safely say for me, that it was my lowest point during the walk.


I remember I was limping around a bend in the road, with self pity induced tears streaming down my face when I set eyes on my heroes for the day. It was the family of Ralph and Sherry Johnson, who had driven for hours just to walk for the evening with us.


Sherry and Ralph, who have 3 children but have taken in 2 other young men as their own, walked nearly 10 miles with me that day, even more of a challenge since Sherry is disabled and has trouble with mobility. She, and they, did more for our souls in those dark hours than they will ever be able to recognize. Their smiles brought the sun, that took the cloudy day from my heart. I will never be able to thank them enough.


Nor will I be able to thank Kimberly on the bridge - who brought water and trail mix. Or Eric and Melissa who let us, strangers to them, stay at their home when the truck broke down in the middle of nowhere.


The good people with in our government who took the time out of their schedules to meet with us in D.C., really listen, and in some cases be moved to action.


Or Kim who gave me my prayer stick that she had carved and painted herself from drift wood she found on a Florida Gulf beach.


Or all the folks at the Bed and Breakfasts, nearly 20, who let us stay for free and treated us as though we were paying. Or Ben for setting all of that up for us.


How to thank walkers Ken, Anita, Barbara, Donna, Andre, Tonia, Sandy, Lorrie, Bubba, Noah, Denise, John, Ada, too many to name here, who joined us in solidarity - in love really, for our coast and our people?


Or all the people who left messages of encouragement on the Facebook page? Or the people from around the world who donated funds for the trip? Or out of work, casino worker, Antoine? Or the fishermen of the Gulf who were brought to tears by the simple idea that we loved them enough to do it in the first place? Or the basket maker? Or the toxic waste dump fighters? Or the uranium mine halters? Or the Planet Walker? Or the bikers? Or the Bataan Death March survivor? Other Gulf activists and community organizers? Or 9/11 First Responders? Or Gulf Restoration Network? Or Gulf Fund? Bridge the Gulf? Or LEAN? Or the folks at my paper and in my community that followed me on the internet all the way up to D.C.?


How do you tell people that with out all of their support, without their love, you never would have made it? That they are the heroes that motivate you to be more, do more, claim more?


In addition, and with great honor, I was joined by a crew of people whose devotion to not only to the feat, (no pun intended) of such an undertaking, but to the Gulf and her people is voluminous.


Project Gulf Impact, which is comprised of Matt Smith, Heather Rally, Gavin Garrison and Justin Daly, have been working in the Gulf to raise awareness through film and other forms, since the beginning of the oil disaster. Their immeasurable amount of technical savvy and support as to website, social media and documentary effort was instrumental.


Joined by Lamar Billups, they also walked a great deal of the time and provided everything from moral support to a traveling camper for a restroom.


Sami Abdou, came in as a second camera man for PGI, yet ended up being the person who walked second most over the length of the trip. He was followed in the amount of miles by Griffin Hagler. Both of these men became very close friends to me, and I am beyond honored to know them.

Most importantly, I have to thank my family. Without their dedication to the idea that one person can make a difference - and that the person could even be your mom or wife, the walk could never have happened. My husband held down our fort for nearly 40 days, and I can tell you that is no easy task. My kids, who sacrificed having a mom for just as long, fill me with pride. They inspire me.


Personally, I can easily say that the walk was a life changing event. But the truth is, it was not the challenge that made it so, it was the flesh and blood, beating hearts, hands of help, minds of action, lives of service, people, that was an illumination of the spirit.


I humbly offer you all my thanks, for your support, yet even more for your conviction.


God Bless you all, and God Bless our Gulf.