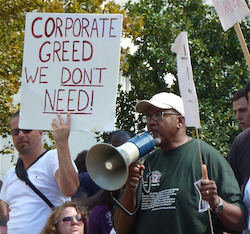 The national wave of “Occupy” actions, begun on Wall Street in September, has spread to New Orleans.  “Occupy NOLA” began with an almost joyous march through the city, and continues now in a more than two-week-old encampment outside of City Hall.

On October 6th, nearly 400 marched from Orleans Parish Prison to the Central Business District, in a symbolic show of the connection between the prison industrial complex and the corporate elite of the city.  Through handmade signs, and speeches at a rally in Lafayette Square, people voiced a diverse (and sometimes conflicting) range of viewpoints on economic inequality, corporate power, and entrenched injustices.

Rather than giving voice to just a few spokespeople with a unified set of demands, “Occupy NOLA” is attempting to establish a democratic space for “the people” to discuss, decide, and act on their own issues, solutions and priorities – without the influence of government or corporations.

During the October 6th march and rally, I spoke to five New Orleans residents about why they were participating.

Leon Clark connected Wall Street to a long history of “elitists… [telling] poor folks – ‘you got to go.’”  From Columbus laying down stakes on Native American land, to post-Katrina New Orleans, to the BP oil disaster, Clark says, “The elitists… don’t give a damn about our people.”

Shana griffin said she marched to protest recent austerity measures that target women of color, and said it was time to shift national priorities that are driven by “corporate greed.”

Like many, griffin voiced ambivalence about the “Occupy” actions.

She said the march and rally were not “representative of the issues I’m concerned about,” because many of the speakers lacked an analysis about race, class, and gender.  Griffin also said she opposes the notion of “occupation”:

“When you asked me what I was doing here, I was struggling to say I was part of quote unquote ‘Occupy Wall Street,’ because of the language of occupation.... To occupy something is to take over or to settle…. We’re on indigenous land here... How do we occupy something that is already [occupied]?”

But griffin sees importance in the democratic process of people gathering freely and voicing their concerns, and is holding out hope that “Occupy NOLA” will better voice the demands of the people of the Gulf Coast in the near future.

One man at the protest, who declined to give his name, said, “I think we all have our issues that we go after, but the real issue is our lack of power...  We’re going to come together and talk it out.  And that’s where the power lies, in horizontal democracy.  In a leaderless situation where we all come together and hash out where we came from, what we need, and how we are going to live together in this world.”

When I asked Stanley Smith what brought him to the rally, he let out a big laugh, “You don’t have enough film and time!” He said his political discontent goes beyond any single issue, because “it’s just the whole set-up… When you invest in things and not people… that’s crazy.”  He talked about private prisons making a profit for each day they hold an inmate, and New Orleans schools preparing children for the service and tourism industry rather than critical thinking.

“We’ve been chasing the [American] dream for hundreds of years… It’s not a reality. Because the reality is, everybody can’t be millionaires… We have to get away from this thing about ‘what is the profit?’ and start building people up.”

Like others I spoke to, Smith said he wants to see the “Occupy” action spark a democratic process, “people coming out… and sitting down and hammering out, which way we should be going?... Where’s our priorities?... Understanding what’s most important, and not letting corporations tell us what to do.”

Note: The author has been participating in the Anti-Racism Working Group of “Occupy NOLA.”

Ada McMahon is a Media Fellow at Bridge The Gulf (www.BridgeTheGulfProject.org), a community journalism project for Gulf Coast communities working towards justice and sustainability.  She previously worked as a blogger and online organizer at Green For All, a national non-profit that fights pollution and poverty through "an inclusive green economy".  She is from Cambridge, Massachusetts, and currently resides in New Orleans, Louisiana.