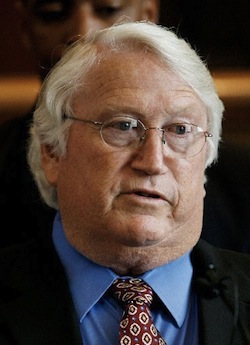 Last week, the newsletter of the International Coalition to Free the Angola Three published recently transcribed testimony of the October 2008 deposition of Burl Cain, Warden of Angola Prison, questioned by Nick Trenticosta, an attorney representing former Black Panther and Angola Three member Albert Woodfox. The testimony, quoted below, reveals a lot about Cain's view of Black Panthers and others who have engaged in prison organizing.

NICK TRENTICOSTA: I would like to show you State's Exhibit 30. Are you familiar with this document? It purports to be a letter, and who is it from?

NICK TRENTICOSTA: Is this letter significant to you?

CAIN: Yes, it is. You can read here, "I view amerikkka" - and he spelled it real crazy, more like the Black Panther would, I suppose - "and her lies, capitalism, imperialism, racism, exploitation, oppression, and murder of the poor and oppressed people as being highly extreme. It is my opinion that anyone who views these situations as anything other than extreme is petty bourgeois or a capitalist fool!!! History has taught us that revolution is a violent thing but a highly necessary occurrence in life. Revolution is bloodshed, deaths, sacrifices, hardships. It is the job of the revolutionary forces in this country to manufacture revolution instead of trying to avoid it. To do otherwise is the act of an opportunist." This is very scary because it means that it needs revolution. Violent revolution is scary for America, for us.

NICK TRENTICOSTA: What is the date of that letter?

NICK TRENTICOSTA: And do you know whether his political views have changed since that time?

CAIN: That is what is scary to me. I think not because even in 1997 we had the protest in front where - "Release the Panther" and "Angola is a shame, Burl Cain to blame" - there was a Black Panther demonstration there. Albert Woodfox and Herman Wallace is locked in time with that Black Panther revolutionary actions. Even when Robert King Wilkerson came with Congressman Conyers to Angola, they gave me a little pack of pralines, Congressman Conyers did, and on that pack of pralines was a Black Panther.

NICK TRENTICOSTA: Let's look at State's Exhibit 3. You stated, if I can paraphrase, Woodfox was throwing human waste?

CAIN: Apparently they were throwing human waste at each other. It's on their cell bars, both of them. So either he was throwing it out or throwing it in.

NICK TRENTICOSTA: Could it possibly be someone throwing human waste at Mr. Woodfox?

CAIN: It could be, and I would ask why. How did Mr. Woodfox provoke him to throw human waste at him?

NICK TRENTICOSTA: You have some mentally ill people that live on CCR, don't you?

CAIN: I have 1,900 inmates taking psychotropic medicines. I don't know where they live, but I would hope the medicine would tame them down.

NICK TRENTICOSTA: An inmate only gets human waste thrown on them when they provoke it to happen? Is that your testimony?

CAIN: Not only, but if you're throwing human feces at somebody, you have to have normally a reason. You just wouldn't throw it at the wall.

NICK TRENTICOSTA: Are you aware that a federal judge has ruled that Mr. Woodfox's conviction is now reversed?

CAIN: Until we get release papers, he's in our prison guilty of the murder of Brent Miller.

NICK TRENTICOSTA: So it's your understanding everybody in jail is guilty? Come on.

CAIN: In Angola. Because he's in Angola.

NICK TRENTICOSTA: In the last five years he has done pretty good, hasn't he?

CAIN: He's like a man on death row could do good, but he is still on death row. He's just good because he is locked in CCR, not because he's good at heart.

NICK TRENTICOSTA: He didn't cause very much trouble, correct?

CAIN: Because the lion in a cage can't cause much trouble, you see.

NICK TRENTICOSTA: Let's just assume, if you can, that he is not guilty of the murder of Brent Miller.

CAIN: I would still keep him in CCR. I still know that he is still trying to practice Black Pantherism, and I still would not want him walking around my prison, because he would organize the young new inmates. I would have me all kinds of problems, more than I could stand, and I would have the whites chasing after them. I would have chaos and conflict.

CAIN: I have no idea. I know they hold their fists up. I know that they advocated for violence.

CAIN: You would like me to say yes to everything you say so you can go say I did, but you can't go there, and you're trying everything in the world to get me there. I'm happy. I'm laughing at you. I'm not mad. You just ain't going to get me there. That's just Angola. What can I say? He's bad. He's dangerous. I believe it. He will hurt you. They better not let him out of prison.