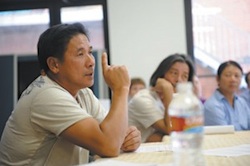 By Susan Buchanan, crossposted from The Louisiana Weekly.  Vietnamese and Cambodian fishermen in Village L’est and Versailles in New Orleans East were among the first residents to return after Katrina, only to see their livelihoods crushed a few years later by the BP spill. In early April, 41 Asian-American fishermen sued BP in federal Eastern District of Louisiana in New Orleans, claiming discrimination in the company’s Vessels of Opportunity program. Other groups of fishermen have also sued over treatment in the VOO, which hired boats to remove spilled oil.

Plaintiffs in the case are represented by attorney Ryan Beasley in Harvey. The suit says that during the VOO Program, BP sent emails to Danos and Curole Marine Contractors, LLC in Larose, and DRC Emergency Services, LLC, in Mobile, Ala., telling them not to hire vessels owned by Vietnamese and Cambodian Americans. The class action suit was filed against BP, Danos and Curole, and DRC Emergency, and seeks damages for civil rights violations and employment discrimination. The suit says that 4,000 Asian Americans were affected by BP’s policies, and claims that defendants violated Section 1981 of the Civil Rights Act of 1866, which says all Americans have the same rights as white citizens.

Why didn’t BP want to hire Asian Americans? Attorneys and others point to the cost of translating legal language, a preference for workers outside the area closest to the spill, and cronyism—between BP and its contractors and certain boat captains hired by the VOO.