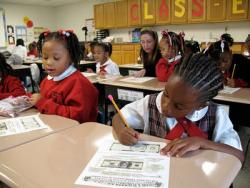 By Dr Lance Hill, crossposted from the Louisiana Justice Institute, originally posted on Diane Ravitch's blog. Charter schools that perform better by recruiting and retaining better students don’t exist in a vacuum: skimming the best and most profitable students affects other schools, though it is hard to detect in systems with few charters.  The systemic effects are easier to see in a “closed system” as we have in New Orleans in which 80% of students attend charters.  Every high-performing charter creates a chronically low-performing school somewhere in the system. The students that charters reject, who are high-needs and high-cost, become concentrated in a separate set of schools.  These “dumping schools” concentrate students with enormous skill deficits and disruptive behaviors, making it impossible for educators to teach and also creating an intractable non-compliant student subculture.  Privatization creates good schools by creating even worse schools.

The evidence of this “rob peter to pay paul” phenomenon is not difficult to find.  As charter schools increased in relative performance the first few years in New Orleans, the remaining state-run public schools were locked into chronic failure.  For four years in a row, the direct-run state schools posted an average 80% failure rate on the 8th grade math LEAP progression test.  This, despite the fact that the state had doubled the expenditure per pupil for a period of time and all these schools were directly run by Supt. Paul Vallas who selected the “world class” school administrators, contracted to staff the schools with the “best and brightest” teachers (TFA), and controlled the curriculum and hours of instruction.  It was clear that the every year charters would skim the best students from the remaining schools and dump the low-performing students forced on them by the lottery.

In 2007, the highest ranking official in the state takeover of New Orleans schools said in a meeting that I attended that some charters were systematically dumping challenging and low-performing students into the remaining public system. Six years after the takeover, only 6,000 of the total 42,000 students remain in non-charter dumping schools:  100% of those students are in state-run schools that the state graded as “D” or F” in 2011.  It is a wonder that New Orleanians can’t figure out why we have the highest per-capita murder rate in the nation, and school-age teens are the principal perpetrators of the most reckless of the violence.

Creating excellent schools is not the same as creating excellent school systems.  The free-market has one goal: profit.  It did not come into existence to create innovative and equitable public services. The New Orleans Model ensures that successful schools are created at the expense of the system as a whole; one student advances at the expense of another.  If other school systems opt for the New Orleans Model, they need to do so knowing that the result will be a separate and unequal system of “college prep” and “prison prep” schools.

Dr. Lance Hill is the Executive Director of the Southern Institute for Education and Research, a tolerance education and race relations research center based at Tulane University in New Orleans. He is the author of (University of North Carolina Press, 2004).