Did Closing the Large Housing Projects in New Orleans Create a Spike in Crime and Violence? 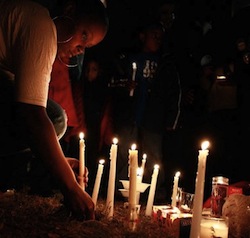 By Dr. Lance Hill, crossposted from Justice Roars. One of the post-Katrina policies touted as a way of reducing poverty and crime was to demolish most of the large housing projects and disperse the poor throughout the city (and the nation). Apparently the planners were not paying attention to what happened in Memphis when this policy was implemented.

In New Orleans, dispersing the poor also meant dispersing some of those who deal drugs, which would inevitably lead to a new war over drug markets. Combine that with a generation of untreated Katrina-traumatized poor youth, expelling them or driving them out of the new profit-driven charter schools, and skyrocketing Black unemployment and poverty rates because Blacks have been locked out of the billions in recovery money, and one can see the futility of proposals to “arrest and imprison” our way out of this problem or blame fragmented and dispersed families and local communities for problems that were imposed on them by social planners who wanted a whiter and more affluent New Orleans.

Now there are cries to bring out the National Guard to meet the problem of traumatized youth who could care less about the criminal justice consequences of their actions because they expect to be quickly executed in retaliatory actions for their crimes. The National Guard tactic was tried in Puerto Rico several years ago but only showed some success because crime and violence was concentrated in a few public housing neighborhoods, which we no longer have for the most part. The National Guard assisted local police in New Orleans after Katrina, but that was in a city largely depopulated. Now that we have forcibly dispersed the poor internally in a 180 square mile area, the chance of anticipating and preventing violence through policing seems very unlikely.

But we do have proven solutions that overcome geography and trauma. They begin with remedying the injustices of the Katrina recovery. Opening tens of thousands of jobs to local residents would reduce, not increase violence. It would not end it, but it would improve on the 37% Black poverty rate we have now—a rate higher than before Katrina. We had $20 billion to spend on hiring local workers and we did not; we now have another $20 billion in recovery dollars and there is no plan to change the policy of relying on cheap, itinerant, outside labor. People who self-medicate their emotional pain with street drugs can be removed from the deadly drug market by providing comprehensive mental health programs and prescription drugs for the indigent. And we can ban the practice of expelling special needs students and low-performing students from our schools and also stop driving them into dead-end “prison prep” dumping schools just so that privatized charter schools can inflate their test scores and make a profit.

What does the future hold? We now have 65% of Black children under the age of five living in poverty in New Orleans, facing a bleak future. The Census Bureau says that as of 2010, there is not a single white male between the ages of 13 to 15 living in poverty in the city of New Orleans. Is there a correlation to the relative low crime and violence rate among young white males and the fact that, although they too experienced the trauma of Katrina, they came back to private mental health care, free anti-depressants and counseling, and their parents' homes were not demolished nor were their jobs stolen? They face a bright, secure, future.

The model for solving the problem of New Orleans Black youth crime and violence is right in front of us: it’s just across St. Charles Avenue.