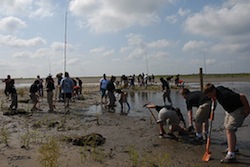 By Bia Assevero, crossposted from The Lens.  December’s climate change conference in Durban, South Africa, was, as these conferences usually are, more style than substance. Small steps were taken here and there – the Green Climate Fund, formation of new ad hoc committees, increased support to developing countries – but ultimately, delegates walked away without a legally binding agreement to reduce the emissions that cause global warming.

The events in Durban reflected that science holds shockingly little sway over the political process, be it domestic or international. Successive administrations in the U.S. have failed to make climate change a priority and the voting public has not punished them for their complacence.

This is particularly problematic in the Gulf region, the most vulnerable in the U.S. to the effects of climate change. Louisiana is dealing with rapid loss of its wetlands, a phenomenon that impacts everything from hurricane defenses to the fishing industry. Texas is facing the worst droughts in half a century, and the region as a whole has had to contend with ever more vicious storms and flooding. And those are only the obvious manifestations of climate change, a reality that is changing the way we live – from how we build our houses to the ways we make a living.

Monique Harden is one of the co-directors of Advocates for Environmental Human Rights, a New Orleans based organization that frames questions of environmental justice as human-rights issues.  “The outcome in Durban wasn’t unexpected,” Harden said. “But it does have critical ramifications for the Gulf. It means that we continue to go without protection from the climate-changing effects of co2 emissions and that without a firm commitment to reduction, communities in the Gulf and all along the coastal United States are placed at risk. It’s a vulnerable and precarious position.”

The existing legal framework is part of the problem. As things currently stand, the federal response to environmental disasters is discretionary. Decisions are made by the government without any input at all from the citizens who are directly affected. As a result, some of these decisions actually prolong or entrench the displacement that follows disaster. There is no legal guarantee that ensures residents are able to return to their homes after a hurricane or that those homes will be restored in the event of flooding or tornados. Ironically, the U.S. has helped set standards overseas for relief and recovery assistance but has adopted no such standards domestically. This hypocrisy only serves to undermine what’s left of America’s moral leadership.

Political deadlock, economic crises, legal wrangling — these only exacerbate our vulnerability to climate change. The lack of a legally binding agreement in Durban — and America’s part in failing to obtain such an agreement —  sends a horrific message to those people who will pay the steepest price for our worsening vulnerability. To the residents of the Gulf, it says that the government – those officials elected to represent us – do not have our best interests at heart.

Bryan Parras works with the Texas Environmental Justice Advocacy Services (TEJAS) and he offers this explanation for why Gulf residents aren’t more outraged about the government’s lack of action on climate change:  “People have other pressing concerns,” Parras said. “The large Latino community, for example, is worried about immigration. Folks are also concerned with job security and in this region a lot of jobs are tied into the oil and gas industry.”

Read the rest of the article from The Lens.