Have we Learned Nothing from Katrina? A Reflection on Hurricane Isaac 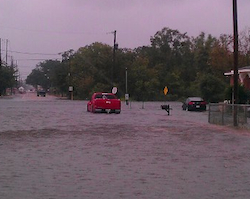 People say it’s not that bad. They aren’t homeless and outdoors like they were after Katrina. But if you don’t talk to the individual you don’t know what their pain is. Right now, a lot of people don't have any food. Red Cross and Salvation Army are requesting donations for food. Nobody has the strength to go through the FEMA process.

My house flooded. The inspector came a few days ago. He said, “You’ve got wind protection, Ms. Hanshaw, but this damage looks like rain. It wasn't the wind that loosened up the roof, it was the rain going sideways.” With insurance, it seems whatever coverage you don’t have, that happens to be what caused the damage. So people might be thinking, "Oh, they still got their houses," but if don't have the money to make repairs it doesn't matter. I too will be living in a molded house, which can cause terrible symptoms and infection.

I wasn’t in Biloxi during Hurricane Isaac, I went to Hattiesburg. But Isaac was a major scare for all of us. The water was rising with no rain. In Ward 2, where I work at Coastal Women for Change (CWC) and where most of CWC’s members live, the water totally covered the yards. It came to the top of the tires of cars on Bellman Street. Isaac was a Category One. If it had been a Two, we'd have been under water.

Coastal Women for Change has been doing hurricane protection meetings every three months. We’re giving the community basic knowledge of what you should have to prepare for a hurricane in terms of cash, your insurance papers, your social security card, your medical papers. But if you have no shelters to go to, if you don't have means to leave, what happens to you? Our seniors and the people in the flood area should be taken care of first. With Isaac, yet again, we saw that simple precautionary measures were not put in place by city, county, and state officials.

Here are just a few examples of how Biloxi was not prepared for Hurricane Isaac:

The drainage system in the low-lying area was not secure. There were a bunch of trees and debris on top of a drainage area before the hurricane. The neighbor on that street had been calling the city before Isaac, saying the drain needs to be cleaned out.  The city did not clean it out. Being pro-active is the key to being prepared for all disasters.

We had to go to D’Iberville and get sand bags and physically bring them back over to East and West Biloxi. You can't believe the people that were there in the long line. A lady that was 70 years old was by herself, trying to pack all these sandbags to bring back around Division St. And I can hardly pick up the sandbags, they are super heavy. I think the city should have taken care of that, since we know where the low-lying areas are.

The local officials said things like, “We're going to have a shelter, we're going to tell you where it is in a minute." In the meanwhile, the water's steady coming up. They should already have a plan in place. Shelters should be in place. We must have a bullhorn telling people, "Ok, you must leave and this is where we're going to take you if you don't have a way out.” There shouldn't be people scattered, running, and not knowing where they're going.

Why weren't there trucks with sandbags to take into these low-lying areas, to try to help them? We can't do anything about the wind, but we can do things like making  sandbags available, and making sure the drains are clean. Those types of things should have been done. Elected officials should definitely have a plan in place and people should know, beyond a shadow of a doubt, what it is. Regardless of whether it's a One, Two, or Zero category storm, it still has the tendency to do something that you're not ready for. So that's the takeaway -- take precautionary measures, especially in the low-lying areas.

We’ve been discussing all these things since Katrina. Why are we still talking about the same stuff? Why are we still talking, but there's no change here? I mean, there’s all these empty lots and there was Community Development Block Grant money, money available from the federal government to develop low-income communities. Why can't you build safe houses and put people in them? You got all this land, why not build healthy affordable housing? And build elevated housing, so you're not just building in vain. But nobody’s moving on that.  On the other side of the tracks, where the Whites live, where the City Hall is, you have restaurants coming up. It's just so alive, the look is like downtown New Orleans!

Biloxi is mostly white (64.5%), with Black (19.6%), Latino (8.7%), Vietnamese and other Asian communities (4.4%) (Numbers from the 2010 census).  But in the low-lying areas, in Ward 2, predominantly it’s people of color. There might be a few white people, but the majority are Black people. It's where the Hope 6 housing development is. There’s a cluster, across the track, kind of reserved for people of color to live. That's the lowest lying area in Biloxi.

I know this happens all over the world. But its very disappointing when you're looking at a community that you were raised up in, literally go down, right in front of your face. I’m trying to help my family members and friends and people I care about, but I’m going down with them. It's not like I'm this person who came into the community to help these people. No, I am one of the people. That's the difference. I live with them, my garden is there, my office is right there, on the ground. I live here.

I feel so worn out, mentally. I fight so hard all the time. Are we going to make it? Yes. But not without aging and stress. The truth is, life still must go on in spite of climate change and the affects it brings on the poor communities.   I just want to scream, is anyone listening?  I feel like Spike Lee, you know, "WAKE UP!"