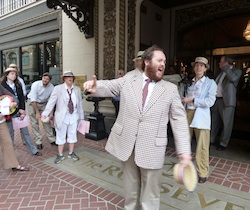 Press release from Sons and Daughters of the Kingfish, January 25th, 2012. NEW ORLEANS - The Huey Long flash mob assembled today to celebrate Huey Long’s defense of Louisiana is currently being denied access by police and hotel personnel at the Roosevelt. “They have kept us out today because the oil industry knows we are a threat to business as usual – and that business is robbing the state of Louisiana,” said Huey Long.

The Louisiana governor who proposed taxing oil companies today descended, en masse, upon the Louisiana Mid Continent Oil and Gas Association. A flash mob of Huey Longs  appeared at the group’s yearly back-patting affair, known as the annual meeting. “Every man a king!” said Huey Long when contacted early this morning. “The oil companies pollute Louisiana, destroy our coast and make off with the profits. Let’s make ‘em pay!”

A flash mob is a group of people who assemble suddenly in a public place, perform an unusual act for a brief time, then disperse, often for the purposes of entertainment, satire, and political expression.

In early 1929, Huey Long convened a special session of the legislature to enact a new tax of five cents on every barrel of oil processed in Louisiana. Today’s flash mob highlighted the need to make today’s oil industry pay for its destruction of Louisiana. That destruction includes:

- Our coast. Researchers have demonstrated that the oil industry’s canals are responsible for subsidence and have destroyed our coast. Plans to restore our coast and protect our communities could cost between $50-$100 billion. Oil industry money is critical to rebuild our coastal lines of defense.

- Our economy. Fisheries have been harmed, the health costs are spiraling. Louisiana fines oil polluters for fewer than 1 in 100 spills, sending oil companies the clear message that it’s OK to trash our coast and communities.

- Our health and environment. There have been more than 3,000 spills since the BP Disaster, and the state’s 17 refineries are averaging nine accidents a week.

The oil industry takes issue with the characterization by Huey Long. “Why should we pay?” said Richard “Rich” Stud, Oil Industry spokesman. “Surely the people of Louisiana aren't going to finally stand up for themselves after decades of abuse.” One of the mob’s Huey Longs invited Mr. Stud to step outside in the back alley to settle the score with their fists. Mr. Stud declined, however, and retired to his suite at the Roosevelt Hotel paid for by the Louisiana taxpayer.