Rebecca Templeton is the executive director of Bayou Grace Community Services, a nonprofit in Terrebonne Parish, La. Templeton recently spoke with Bridge the Gulf and the Institute for Southern Studies for the report Troubled Waters: Two Years After the BP Oil Disaster, a Struggling Gulf Coast Calls for National Leadership for Recovery. Templeton detailed how she was able to bring Gulf Louisiana communities together to discuss environmental issues from the BP oil disaster, through large dinners they hosted. Those dinners eventually included state and local elected officials involved in the Louisiana master plan around coastal restoration.

Bridge The Gulf / Institute for Southern Studies: Tell us about the work you do with Bayou Grace Community Services.

BTG / ISS: How have the lives of people in your community changed over the last several years?

Although we celebrate our resiliency, I think there comes a point where people truly hit a wall and don’t know what to do next. I fear that people have begun to hit that wall.

BTG / ISS: Talk about the specifics of the work that you do.

Templeton: At Bayou Grace’s core, everything focuses on advocating for restoration and protection, and what that means for our communities: being able to continue to exist. So we do have a pretty robust volunteer program, where we have volunteer groups that come in from all over the nation. We’ve recently transitioned from a reconstruction-based volunteer program, where we helped people to repair their homes after disaster— to really educating our volunteers on the environmental issues, the impacts of land loss, what we see as the problems, solutions, next steps. We get our volunteers out on restoration sites where they can be part of the solution. Our goal is that when they go back home they join us in advocating for our existence. That’s been a very successful part of what Bayou Grace does. 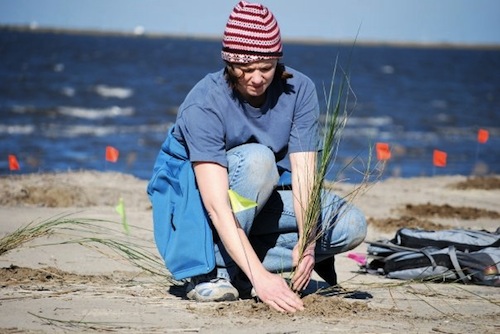 We also have some community outreach programs. In times of disaster, that may mean that we connect people in our communities to assistance. Since the BP disaster we’ve had a community dinners program, and the idea is that through these community dinners we can build resilience in our communities. It’s a time when people can connect with one another and to other people in their communities. We’ve also incorporated environmental speakers. And it’s become a really effective vehicle to get information to people in the communities, but also that people have the opportunity to provide that they’re thinking, to say what they’re thinking to people at the state level, at the local government level. So we’re going to continue with that. I think more and more it’s been a way to connect the voice of the people to people who are in decision-making positions.

BTG / ISS: So the decision makers are a part of the community dinners?

Templeton: Yes, absolutely. As the state worked to roll out the draft Master Plan for coastal restoration, they really came to us and said, “We’d like to use one of your dinners as an outreach session for us.” And we built upon that. The first dinner was the state telling the people what was going on. By the third dinner that the state had attended, we broke out into small work groups to comment on the draft master plan, and report back to the State. People left that dinner knowing that at least their ideas had been heard, their concerns had been heard. So I’m very proud of the fact that more people in our communities were able to comment on the plan than maybe would have occurred had we not had those dinners.

I want to continue to do that, and get people involved and engaged in advocating for themselves— getting them to understand there’s a place for their voice, that what they have to say matters.  And provide the opportunity so that decision makers are there to listen to the local person, because I think for a long time that’s been missing.

I don’t know exactly what all the reasons are.  The everyday person in the community, I think they’re worn down.  A fight for restoration has been going on for decades and people are kind of at the point where they say, “I don’t think what I have to say matters to the people making those decisions.”

And I think also at the other side of it, those decision makers don’t know how to connect with that local person, even if they want to. How do they connect with that everyday person and understand what they feel, what they want, and maybe to get good ideas from the local people?  Bayou Grace works very hard to connect the voice of the everyday person in our community to the people who are the decision makers, and hopefully local people can be part of that decision-making process. 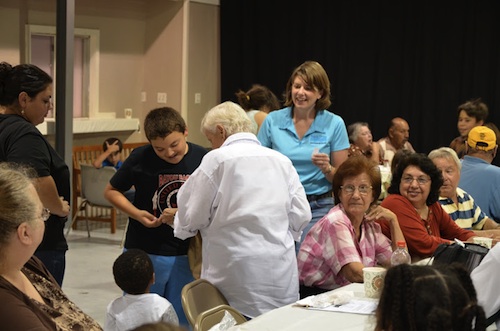 Photo: Templeton at a community dinner in Dulac, La.

BTG / ISS: What is missing from the conversation we’re having nationally?

Templeton: I think the connection that coastal Louisiana has to the well being of anyone no matter where they are in the United States. I think we need to find a way to do a better job of saying what happens here impacts you, and this is how. I think we need to do a better job outlining what those impacts would be if effective restoration doesn’t take place—what’s the impact of that? Is it that the port system is interrupted? Is it that our fuel supply is interrupted?

My hope is that once that connection is made people are willing to make the investment in coastal Louisiana, because it’s an investment for their own well being.

BTG / ISS: What would you call on our national leaders to do?

Templeton: Justness and fairness need to be added to the equation. At this point it seems to be that decisions are made looking at well, what can we afford to do? Even when you look at the fine money from the BP disaster—how much is not going to the area that was impacted? That doesn’t seem just and that doesn’t seem fair to me. So I think somebody needs to be brave enough to step up and to make those hard decisions, but decisions that are just and fair. I think that has been absent for a very long time.

Templeton: Very basically, I would want people living in homes that are safe, that are appropriate for the conditions we live in. We know that we will be impacted by storms no matter what. My dream is that everyone lives in a home that is elevated and safe and as hurricane-proof as we can make it. I think that is the most basic, basic need that we have.

Beyond that, I’d love there to be a thriving restoration industry, so people in my community who so desperately need to be gainfully employed could make a good living at protecting their own communities. I’d love an environment that is restored so we have those natural protections in place that have just been washing away.

Bigger than that, I’d love my son, who’s 15 years old, who dreams of being able to grow up and live in the same community that I did—that he has that option to grow old in the same place that his grandfather is growing old. And I think right now he wonders, “Will I have that option?” So my dream is that Jacob gets to raise his family there and make his living there and continue to do the things that he loves to do in the place that he loves the most.