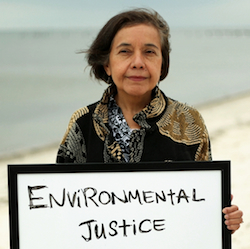 Roberta Avila is the executive director of the STEPS Coalition, which includes 30 social justice organizations on the Mississippi Gulf Coast that came together after Hurricane Katrina.  Avila spoke with Bridge The Gulf and the Institute for Southern Studies for the report Troubled Waters: Two Years After the BP Oil Disaster, a Struggling Gulf Coast Calls for National Leadership for Recovery. She discussed coastal restoration problems, how the Port of Gulfport is impacting vulnerable communities, and how to create community benefits agreements.

Bridge the Gulf / Institute for Southern Studies: Tell us about the mission of the STEPS Coalition.

Roberta Avila: Our initial mission was really about ensuring that there was equity around the way the money that came into our state was distributed.  But about three years ago our coalition changed its mission to emphasize the importance of developing grassroots leadership, so that grassroots leadership could advocate for the issues that are important to them.

BTG / ISS: How have things changed in Biloxi over the last 2 - 4 years?

Avila: Well, without a doubt, the oil drill disaster had a huge impact, particularly on the community that fishes, and that was largely the Asian American community. The loss of seafood and oysters and shrimping industry has impacted the restaurants.  I think people's lives have been greatly impacted since the oil spill in many different ways, and we still haven't recovered.

BTG / ISS: In what ways has your community stayed the same?

Avila: One of the things that's pretty much stayed the same is that a big employer on the Mississippi Gulf Coast is the Casinos.  And the Casinos rebounded quickly after Katrina and have not really suffered greatly as a result of the oil drill disaster.

BTG / ISS: Tell us more about the main issues you're working on.

Avila: One of the main concerns I should say is what's going to happen around coastal restoration, and the NRDA process [an assessment of the damages to natural resources caused by the BP disaster], and how the funds are going to be used around BP’s Clean Water Act fines, and/or whatever settlement is made with BP.

BTG / ISS: Tell us about the port.

Avila: Well the Port Campaign really came out of the work that we did right after Katrina.  We knew that at some point the Port of Gulfport was going to be expanded.  But two years after Katrina, our governor took money [intended for housing and community development in low- and moderate-income communities, Community Development Block Grants] and had it redirected it to the port, to the tune of 600 million dollars, which was appalling to us.  Especially given the fact that there were thousands of people that had not recovered.  And so we, as strongly as we could, opposed the diversion of those funds.  We did everything we could to bring national attention to it.

Right after that we changed our port campaign to be “Partners for a Safe and Healthy Port.” The objective of that campaign was to help community members and the organizations in the impacted community to become part of the decision making process on how that money was going to be spent.

BTG / ISS: Draw out a little bit what an expanded port would mean for neighborhoods in Gulfport and why there’s opposition to it?

So it means more train traffic, more truck traffic, and as a result of that more noise pollution and more air pollution.  And so these communities, which are largely African American communities that are going to be impacted, will have to bear the brunt of the pollution from the port expansion.

You know when the money was redirected to the state Port of Gulfport, one of the promises by the port was that it's going to bring 3,000 jobs.  But actually the best numbers we can come up with, using their facts and figures, is that it'll be an increase of 300 jobs over what they had just prior to Katrina.  And so that isn't a lot of jobs.

BTG / ISS: What solutions are you working on?

Avila: One of the things we've been lifting up is the possibility of a Community Benefits Agreement.  It's a legally binding agreement that would allow community to enter into a legal agreement with the state, and the port, to ensure jobs and to ensure different ways that the environmental impact of this expansion could be reduced.

We feel very fortunate in that we've been able to learn from the Port of Los Angeles, about what they've done to mitigate harm that the port there has incurred.  There's green technologies, different kinds of fuel that can be used that are less polluting. We've learned about reduced noise barriers around roads. We understand that there's different things that can be done to mitigate the diesel fumes, there are now trucks that have reduced emissions.  There are things that can be done to make sure that trucks aren't idling, to reduce pollution in your community.

BTG / ISS: What is missing from the conversation about these issues?

Avila: The main thing that's missing right now is something in writing that will address the communities’ concerns.  I feel like one of the good things that happened this past summer starting in July, is that we actually were at a discussion table, that was actually initiated by Governor Haley Barbour. So we had a lot of key influential community leaders, most from the African American community, and decision-makers at the table talking about both the problems and possible solutions.

BTG / ISS: What could the next President, Congress do to address some of these issues?

Avila: I think we have the ear of our Department of Housing and Urban Development (HUD) leaders and I feel like they're doing a good job in monitoring whether or not the state Port is meeting the CDBG requirements for the money that they received.  So there recently was a finding by HUD that the state was not meeting the requirements to monitor and create a plan to ensure that low and medium income residents would have access to jobs that were created at the Port. So we were really pleased to, number one know that they did a monitoring, and then number two that they are requiring the port authority to comply with this requirement.

BTG / ISS: Aside from the port, what would you want the President to say, "this is our agenda for the Gulf Coast"?

Avila: Without a doubt, right now the pressing thing is ensuring that the money that comes from the Clean Water Act is actually used to restore our coast after the BP oil spill. Not only to restore, but to have a prevention plan in place.

Interview conducted by Karen Savage.  The transcript has been edited for clarity and length.