What does gender have to do with housing? 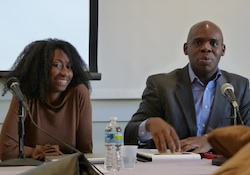 This article is adapted from my comments on the panel “Laying the Groundwork:  Why do we need to understand gender to understand the major housing issues of our day?” with Gary Perry of Seattle University, and Charmel Gaulden with the Gulf Coast Fair Housing Center. The panel was part of the 2012 Fit for King summit on Women and Fair Housing, hosted by the Greater New Orleans Fair Housing Action Center with support from the Gulf Coast Fair Housing Center, Women’s Health & Justice Initiative, and the Anna Julia Cooper Project on Race, Gender and Politics in the South at Tulane University.

For the Women’s Health & Justice Initiative, our organizing acknowledges the intersections of gender and housing—as much of our advocacy challenges the use of social policies, and the ideologies embedded in them, that perpetuate violence in the lives of women of color.  At WHJI, we organize from a framework that regards housing as a gendered phenomenon[1] – and as an important aspect of gender and racial inequalities.

By ‘gendered phenomenon’ I’m referring to the disproportionate utilization of public and subsidized housing programs among women of color and poor women; the gender disparities in high-cost subprime mortgage-lending, particularly among Black women; women and queer people’s elevated risk of vulnerability to poverty due to housing costs and discrimination; and the pervasive nature of gender-based violence in the context of accessing, securing, and maintaining one’s housing.  Gender is an important dimension in understanding how access to housing is structured, how racial and economic disadvantage translates to housing disadvantage, and how housing disadvantages reinforce economic dependency and racial and gender segregation.

Access to housing is not only gendered, but varies amongst women according to structural forms of inequality and factors such as a women’s race, ethnicity, marital status, sexual orientation, income, ability, education, and whether or not her household includes children.  We employ an ‘intersectional approach’ to examine and challenge these structural forms of inequality in shaping one’s access to housing.

Photo: Shana griffin and Gary Perry discuss gender and housing at the Fit for King summit on Women and Fair Housing.

Housing and housing policy are major areas of concern for us, as low-income women of color bear the brunt of housing related poverty, violence, discrimination, and displacement—much of which is the result of gender and racial inequality in society, gender blind housing policies, and myths and stereotypes of low-income communities and people of color.

As such, the utilization of government funded housing programs by poor women and women of color, particularly among black women, to secure housing for themselves and their families is often meet with racist and sexist stereotypes and stigmatizing labels associated with ‘welfare,’ ‘crime,’ ‘laziness,’ ‘uncontrolled-sexually,’ and ‘poverty’ in the housing market.

The racial and gendered subtext of prevailing welfare and public housing assistance stereotypes are revealed in the attitudes and priorities of some policy makers.

Take for example comments made by Louisiana representative Richard Baker in response to public housing post-Hurricane Katrina: “We finally cleaned up public housing in New Orleans. We couldn‘t do it but God did.”

Or the racist and eugenic 2008 legislative plans of Representative John LaBruzzo to pay poor women $1,000 to get sterilized under the cloak of reducing the number of people on welfare and those utilizing public housing subsidies in Louisiana.  He said, “I wonder if it might be a good idea to pay some of these people to get sterilized. My solution: pay impoverished women $1,000 to have their tubes tied so they will stop having babies they can’t afford.”

In September of 2008, when Mr. LaBruzzo’s infamous statements were made, the number of people receiving public cash assistance in Louisiana had dropped by 74% since Hurricane Katrina, and had be declining since the mid 1990s.  Currently, less than 1% of Louisiana’s population receives ‘welfare’ or Temporary Assistance to Needy Families (TANF) – a number representing approximately 13,000 out of a population of 4.5 million people, with the vast majority of recipients being children and the average public assistance grant being $189 a month for a family of three.

The divestment and attacks on housing programs intended to assist low-income women violates the reproductive rights and autonomy of marginalized women, particularly the rights of women with children. Three core aspects of reproductive justice is the right to have children, the right not to have children, and the right to parent the children we have in safe and healthy environments with access to resources and enabling social conditions.   Without access to safe, stable, and sanitary housing, the reproductive rights of women with children are constantly violated.

In an effort to address the multiple ways reproductive violence policies interact to regulate and police the lives of those existing and operating through identities and locations of subjugation, it is very important for us to have an intersectional understanding of gender and housing, and how housing policies shape and influence one’s health and well-being.

Housing is not simply about the dwelling in which one lives, but about how one is situated in a school district, a public transportation system, a job market, a social network, and a community of opportunity.  Access to housing is not simply an exercise of finding somewhere to live, but is a continuous process of sustaining access and avoiding losing a home. Many of the challenges women face in securing and maintaining access to housing reflect and reinforce wider gender inequality in society.

The value of taking an intersectional approach

Organizing from an intersectional approach allows us to understand and respond to the ways gender and other identities intersect with housing policies and practices of discrimination – to work in coalition with not in isolation from other social justice, human rights, and service-based organizations without segmenting, isolating, or pitting one priority of our work against another.

Many black women who are Section 8 vouchers holders in the city often report discrimination in the private housing market at the hands of landlords who refuse to participate in the subsidized voucher program.

that puts her in the position of vulnerability.   It is the intersection of policies, programs, and practices such as

that support and maintain that vulnerability.

Instead of relying solely on fair housing enforcement organizations to remedy the discrimination experience by black women Section 8 voucher holders, engaging in an intersectional approach of housing justice would create opportunities for various organizations and advocacy approaches to be utilized.

[1] In talking about housing as a ‘gender’ phenomenon, it’s important to understand that the terms and identities "woman" and “women”, do not signal particular types of bodies or fixed gender identities.  Women differ by age, race, ethnicity, gender expression and identity, sexuality, education, ability, relationship status, work sector, and citizenship status.

[2] For WHJI, reproductive violence refers to the methods used to sustain reproductive oppression. These methods include policies, laws, initiatives, behaviors, practices, and procedures designed to reduce, control, and/or eliminate the reproduction of marginalized communities, as well as regulate and repress one’s sexuality.


**************
Shana griffin (37) is a life-long resident of New Orleans, mother of two, black feminist, researcher, and social justice activist, who has over 16 years experience organizing nationally and locally with low-income communities of color on critical issues pertaining to racial and gender justice; sexual health and reproductive justice; housing affordability; ending gender-based violence; prison abolition; gender and disaster vulnerability; just sustainabilities; education equity; and climate justice.  Shana is co-founder of the Women’s Health & Justice Initiative, where she currently serves as Research & Advocacy Director (volunteer), and is the former Interim Director of the New Orleans Women’s Health Clinic she co-founded in 2007.   Shana is a member of INCITE! and currently serves on the Board of Directors of Women With A Vision, Inc. and Jane Place Neighborhood Sustainability Initiative, a local neighborhood-based housing and community development non-profit.

The Women’s Health & Justice Initiative is a radical feminist of color organization based in New Orleans, dedicated to improving the social and economic health of women of color and our communities. For more info please visit: www.whji.org.