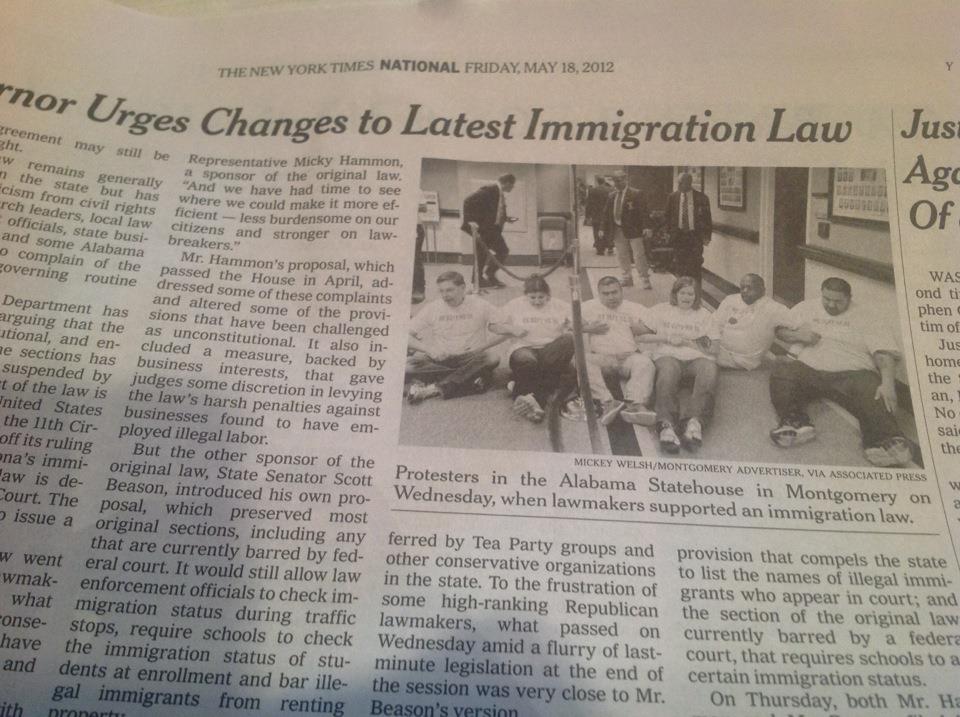 By Jose Cardenas. On May 16, I was taken to jail in Montgomery, Ala., along with six others after we sat outside the Alabama legislative chambers and refused to move as bigots inside were ramming through their revisions to the shameful HB 56.

While in handcuffs, I couldn’t help but recall the terror I once felt when I was a child who felt his future was in doubt.

In 1994, I was a pimple-faced, 12-year-old who should have been preoccupied with playing basketball. But that was the year California voters were considering Proposition 187, a ballot measure that was, in effect, the first state anti-immigrant initiative enacted in this country.

The initiative itself focused on denying state services – including public health and education – to undocumented persons and their children. But the public conversation, especially from the right, centered on the need to rewrite the 14th Amendment to deny citizenship and schooling to children born in the U.S. to undocumented parents.

My understanding at the time was that the U.S. did not accept people like me, even though I was born here and this was the only home I had ever known. Though my parents, who had come here without papers, had adjusted their immigration status by then, the debate had a profound influence on me and who I would become. It made me realize that this was about something much bigger than not having a proper visa when crossing the border.

Today, I live in Alabama, where legislators last year passed HB 56, the ugliest, most racist anti-immigrant law yet enacted by any state, surpassing even Arizona’s widely derided SB 1070.

The point was to make the lives of undocumented immigrants so difficult, so miserable, that they would “self-deport.” In addition to authorizing local police to demand “papers” during traffic stops, it requires schools to question schoolchildren about their parents’ status, nullifies otherwise valid contracts, and much more. This law, forged in a cauldron of bigotry and hate, has reminded the nation of Alabama’s racist past and has unleashed an ugly brand of vigilantism aimed at Latinos.

This year, the state legislature worked to revise the law – ostensibly to jettison some of the more objectionable provisions. But the outcome was something even worse. They simply added more hate and bigotry, including a “Scarlet Letter” provision to publish the names of all undocumented immigrants who come in contact with the courts.

The fact is, this law and others like it are, at their core, part of a strategy pushed by extremists to reduce non-European minorities in this country. States like Alabama are the chemistry labs.

These laws are being driven by extremist groups who are terrified that white people will lose their majority, as the Census Bureau predicts will happen by 2050.

Recently, Michael Hethmon, co-author of Arizona’s SB 1070, admitted to the Washington Post his fear of this country becoming a “majority-minority country.” His employer, the Immigration Reform Law Institute, is an arm of the Federation for American Immigration Reform, which has been designated a hate group by my employer, the Southern Poverty Law Center, and which was founded by John Tanton, a man with longstanding ties to white supremacists. IRLI’s lawyers, including Hethmon and Kansas Secretary of State Kris Kobach, have been crisscrossing the nation to encourage cities and states to enact these types of laws.

This not what our country needs. In fact, as the devastation HB 56 has wrought on industries across Alabama shows, immigrants are vital to a thriving economy.  Similarly, they and the generations that follow (like me) are an integral part of the cultural fabric of America, whether the Anglo-centric extremists like it or not. We need immigration policies that are rooted in reason, that recognize the economic and cultural benefits immigrants bring, and that are fundamentally fair.

And I’m not willing to stand by and see it succumb to xenophobia and fear ginned up by racists. I love my country. That’s why I got arrested.

Jose Cardenas is a community advocate for Southern Poverty Law Center's Immigrant Education Rights Project. He works with advocates across the Gulf Coast on issues affecting immigrant youth in the K-12 setting and on higher education issues.