"Will BP come clean?" My remarks at the BP shareholder meeting 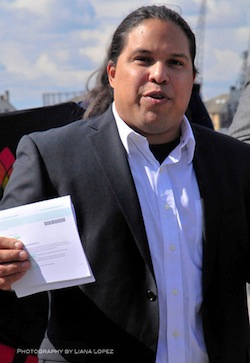 Today, two community advocates and regional leaders from the Gulf Coast, Bryan Parras and Derrick Evans, brought an urgent message to BP's board and shareholders, at the corporation's annual meeting.  Here are Parras's remarks as prepared for delivery. Parras is a leader of Texas Environmental Justice Advocacy Services, (t.e.j.a.s.), Gulf Coast Fund Advisor, and Bridge The Gulf advisor and contributor.  He is from Houston, TX.  Read more about the meeting here.

Good Morning.  My name is Bryan Parras and I live in Houston, TX.  I will be brief and will end with a question directed at the board and chairman of this meeting.

One year ago, I traveled here with Byron Encalade, an oysterman from Placquemines Parish, LA Michael Roberts, a shrimper from Barataria Bay and Tracy Kuhns, the Louisiana Bayoukeeper.  We were barred from entering the meeting and were unable to address the shareholders in 2010.  This year, Byron, Michael, and Tracy continue to struggle with recovery and have not been made whole or compensated for their losses.

They represent a larger community of fishermen and families that have also been devastated and uncompensated by the BP Drilling Disaster.  The fishing communities along the Gulf Coast have had an unprecedented year of plummeting fish stocks to all time lows with no signs of recovery.

In Barataria Bay, “preliminary findings indicate that marine mammals are suffering from low body weight, anemia, low blood sugar, and symptoms of liver and lung disease.”  The scientist say the dolphins’ ailments are similar to those found in other mammals exposed to oil.

In deep sea coral colonies, researchers are attributing signs of damage and stress to oil that was released during the BP Drilling Disaster.

In Louisiana, two groups have recently obtained a manual from the cleanup’s Vessel of Opportunity program.  The document, they say, contradicts public assertions that chemicals used to cleanup the BP Drilling Disaster were safe.  As you know, BP used  unprecedented amounts of dispersant during cleanup efforts.

An impending health crisis is developing in the Gulf Coast states and many coastal residents, cleanup workers and others exposed to the cleanup chemicals continue to exhibit poor health.  Many of these individuals have been unable to acquire proper medical attention.

The symptoms include mild to moderate skin irritation and possible kidney or liver damage.  Those who had higher exposure levels may exhibit central nervous system effects, nausea, vomiting, and anesthetic or narcotic effects according to a manual obtained by the Government Accountability Project.

My question to you Mr. Chairman, is will BP come clean on the toxic nature of the chemicals that were used during cleanup efforts and begin to treat those whose health has been compromised as a result?

***********
BRYAN PARRAS is the Media/Youth Empowerment Coordinator for TEJAS (Texas Environmental Justice Advocacy Services) in Houston Texas, a co-producer of “Nuestra Palabra: Latino Writers Having Their Say” (KPFT / Pacifica FM 90.1), and an advisor to the Gulf Coast Fund for Community Renewal and Ecological Health. He uses still photography and video production to document environmental racism and empower communities engaged in struggle for environmental justice. Formerly he served as director of photography/videography and chief editor for the Maria Luisa Ortiz Cooperative project in Mulukuku, Nicaragua.