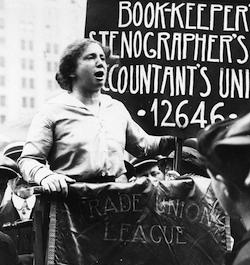 On March 25, 1911, a fire caused by a wayward cigarette broke out at the Triangle Shirtwaist Factory in New York City. The workers scrambled to find safety from the life-stealing smoke and flames, and horror descended as they faced the realization that managers of the factory had chained most of the exits to the building over worries of worker theft (a common practice of the day).

Nearly 150 workers died that day, as victims – mostly young Jewish and Italian immigrant women, flung themselves out eighth, ninth and tenth floor windows to escape the inferno. The disaster was the worst industrial accident in New York history.

The worst – thanks to the public outcry that led to legislation that improved factory safety standards. Although the managers were acquitted of charges of manslaughter, it was the civil trial that exposed the practice of obstructing worker safety in service to corporate profit. That trial essentially altered the history of factory labor safety standards in the United States.

And now, here in the year 2013, we find ourselves once again at the pinnacle of decisions concerning what we will expect from a corporation, and a whole industry, regarding worker and public safety.

BP and the Department of Justice are, at this moment, engaged in back room conversations that the corporation hopes will brush their crimes beyond the reach of justice once again (the corporation got off with a fine and no jail time after the Texas City refinery explosion in 2005 killed 15 and injured 170).

Even as Gulf fishermen wring their hands with worry of the future, as the families of those killed on that sorrowful day nearly three years ago struggle to be heard, as those sickened by BP’s iniquitous clean-up operations continue to suffer, and as wildlife and its habitats face an unknown future – BP continues on its path of deflection of liability and responsibility.

Were it not for the long line of offenses by this corporation against humanity and our world, perhaps the instinct to move on with our lives would be acceptable. But as history has shown us, in no uncertain terms, this corporation is a slow learner, who has repeatedly abandoned the interest of the workers, citizens, and ecosystem, they depend on and should serve, to the greedy gamble of abundant profit.

Just like those who battled for worker rights after the garment fire, we must stand now and demand a full civil trial, with full disclosure of the facts, surrounding the BP Deepwater Drilling Disaster.

We must, for once, not simply wait until a public hearing is held 15 minutes prior to the prearranged ruling, to act. This is a time, perhaps like no other, of proactive approach.

If we are to see the policy changes and regulatory enforcement necessary to protect our water, land, and selves, then we need a complete trial process, again as history has shown us, to lead to thoughtful citizen oversight.

As the stakeholders of culture and environment here in the Gulf, we ask to be joined by those who stand opposed to corporate plundering and rule of our Earth, otherwise this tragedy will have been for nothing, and the lessons of it will be lost.

So the question becomes, what should be done?

Why is that BP has paid billions of dollars on Public Relations around the world in response to this disaster? Why go to such lengths to cover up the deed, if not that bad image is the Achilles heel of this company? That is our recourse, then. We must stand tall, be loud, and make the outcry fit the loss.

Even though our capacity has always been small when challenging this international, multi-billion dollar monster, the truth and search for justice demands that we work together in this mission.

As union activist Rose Schneiderman said at a memorial held for the victims of the Triangle Shirt catastrophe, “I would be a traitor to these burned bodies if I came here to talk good fellowship. We have tried you good people of the public and we have found you wanting… We have tried you citizens; we are trying you now, and you have a couple of dollars for the sorrowing mothers, brothers and sisters by way of charity gift… I can’t talk fellowship to you who are gathered here. Too much blood has been spilled. I know from my experience it is up to the working people to save themselves.”