4 Reasons Why a Settlement with BP is a Bad Idea 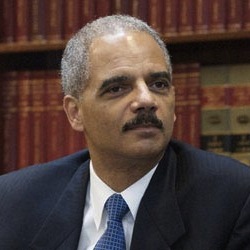 Sort of like OJ Simpson (Yes. I figure he did it), BP "got over" in the US Justice Department's criminal case against them. They didn't win, but they gladly settled for $4 Billion rather than face a full trial with full public disclosure of exactly what happened before, during and after the Deepwater Horizon rig exploded on April 20, 2010.

So, kind of like the civil case that did tackle "The Juice" eventually, the Justice Department's civil case against BP must proceed to trial on February 25 - and not be "settled" for less money or less public scrutiny than what a full-blown trial would yield.

A sign-on letter requesting a full civil trial and not just another "settlement" will be delivered to US Attorney General Eric Holder (pictured) tomorrow.

Besides knowing that this glove fits BP, my four other reasons for signing are:

•    Without a full and transparent Civil Trial, the truth regarding the causes and impacts of the largest environmental disaster in US history (Deepwater Horizon) will remain un-aired in any credible or transparent public forum, and remain obscured forever.

•    A DOJ settlement with BP in lieu of a Civil Trial is very unlikely to result in BP paying the maximum fines allowed under law - a sum which the extremely costly restoration of our Gulf's damaged marshes, estuaries and open waters etc. requires.

•    Neither egregious misbehavior by BP executives nor preventable disasters like Deepwater Horizon are likely to cease if the corporation and its top executives are not publicly scrutinized and held maximally accountable in a full and transparent Civil Trial. (BP has a long history of criminal offenses concerning environmental pollution and worker safety in addition to "Deepwater Horizon")

•    Low-income and minority populations continue to bear the heaviest social, environmental and ecological burdens caused by BP's damage to Gulf Coast ecosystems and communities. A very wide range of unmitigated social and environmental impacts continues to fall disproportionately on tens of thousands of Native-, Vietnamese-, African-, Cajun-, Hispanic-, and other poor Bayou-American families and workers whose livelihoods, health, cultural identity and self-determination are the most dependent of anyone's upon the environmental resources that BP has damaged and/or ruined.

To see more on BP's history as a "Serial Polluter and Killer", take a look at this short video.