5 Things that Won’t Stop the Violence in New Orleans 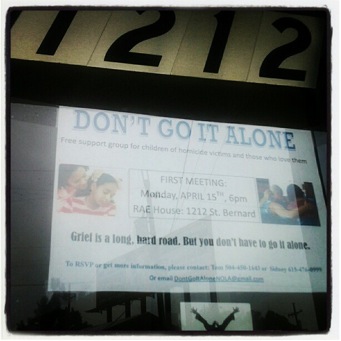 On Sunday morning, around 10 am, I posted this image (right) and accompanying text on Instagram: “I was starting to get salty about having to work on Mother’s Day. Then I got some perspective handed to me real fresh & simple.”

The flyer advertises a "free support group for children of homicide victims."

I saw it as I was going into a training for community organizers at 1212 St. Bernard Avenue, also known as the RAE House. RAE stands for Resurrection After Exoneration. It is a place dedicated to helping the more than 42 individuals who’ve been wrongfully incarcerated and then exonerated in Louisiana and Mississippi since 1991, and the dozens more wrongfully incarcerated individuals who have yet to be exonerated. Every time I find myself in this place, I think about the children, mothers and families of the men who are pictured on the walls. I also think of the double-edged pain that they must experience, as many of them have family members who were murdered and whose murderers were never brought to justice. This is the context for New Orleans’ extremely dysfunctional “justice” system – where often the wrong people are in jail for the wrong reasons, and violence and crime is fueled, rather than stemmed, by mass incarceration. It is unique only in its scale, but indicative of what's happening around the country, especially for Black and Latino communities.

It was about six hours later and seven blocks away where 19 people were injured when gunfire erupted at the Original Big Seven Mother’s Day Second Line.

After I heard about the shooting, I wanted to know… “Why?” I think many of us ask this “why” to understand the complex web of factors that may bring someone to fire into a crowd of celebrating people. But if we are trying to get closer to a solution to the violence in our city, let’s avoid the "why’s" that bring us to a place of blame. ‪Yes, people who harm others must be held responsible for their actions - but we should also look beyond the gunman, at policies and systemic actors like our police, our judges, our corrupt politicians, our jailers.‬

I truly want a solution to the violence in my city. I want to end the bloodshed that is so prevalent in the place where I am raising my son. And I know that the ways we are trying to end it now are not working. The Gulf South in general and New Orleans in particular is at the nexus of crisis and solution concerning gun violence, the drug war, poverty, racism and mass incarceration.

At our membership meetings for Voice Of The Ex-offender (VOTE), if we keep retreading the same ground on a topic, someone calls out “ELMO”, for “Enough, Let’s Move On!” If we do the same things we’ve always done, we will end up with the same results we’ve always gotten.

Here is my top 5 list of things that won’t end the violence in this city that I love:

1. More Law Enforcement – Often the response to a tragedy translates into our streets becoming (even more of) a police state. It happened after Katrina. The night after Helen Hill’s murder was protested on the steps of City Hall, I saw a sea of blue lights up and down Orleans Avenue. I thought about the money that would be spent to keep all those squad cars patrolling (terrorizing) this already depleted and vulnerable community, where undamaged public housing units had been boarded shut for over two years by steel plates that cost up to $1,500 each. Law enforcement, particularly our local brand of corrupt and murderous law enforcement, has been woefully ineffective at reducing the homicide rate. More policing often means less safety. Last week dozens of youth, mostly Black and Latino, many LGBT and transgender women, spoke about being targeted, harassed, scared, and arrested for nothing more than their race and/or gender presentation, through NOPD’s “stop and frisk” policies.

2. Blaming “New Orleans” (read “Black”) Cultural Institutions – It is ironic that any violence occurs at second lines. They are a joyful part of our city’s hallowed ground, a sacred space that brings people together. They also provide an example of what makes life in New Orleans meaningful and worthwhile despite our challenges: poor and oppressed people being rich in spirit, culture and resistance, making something beautiful emerge out of hardship. This is a Black cultural tradition that people feel is under threat, being commodified, co-opted, appropriated, policed (not to any positive effect, obviously) and marketed. Second line culture does not create or promote violence.[1] As the Original Big Seven Social Aid and Pleasure Club said in a statement released after the shooting:

“Crime and violence in New Orleans is a systemic problem and we strongly believe that safeguarding our cultural heritage helps to address the roots of violence. We are a cross-generational organization, ages 5 - 70. Our young people grow up in this culture, are fed by it, and feel loved, supported and connected in ways that build real security. That’s crime prevention."

3. Making this an US vs. THEM Thing – Sometimes we ask "why?" because we want to distance ourselves from the people who would perpetrate such horrors. But that distance will not bring us closer to understanding the root causes of violence. In order to address these, we need to see our own complicity in perpetuating violence. We need to see the ways that we allow our schools to be privatized, our neighbors to be illegally searched and arrested, our elected officials to disrespect the communities they represent, and how we continue to call for more money for law enforcement, jail beds, and corrupt prosecutors while schools, public defenders and mental health and substance abuse programs face devastating funding cuts. 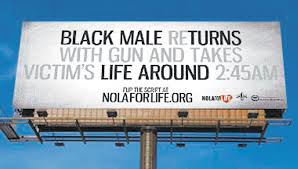 4. Billboards –  This offensive waste of money does nothing to deter crime, and is the propaganda of the Mayor’s dolled up racial profiling project which targets the “600 most dangerous individuals” in the city. One of the tenets of NOLA for Life, the Mayor's "comprehensive murder reduction strategy", is to basically harass young Black men until they inform on their peers in exchange for the promise of low paying jobs and underfunded social services. We need a meaningful division of resources that lead to true job creation for people who have already been to prison, while also reducing the number of people going in, the numbers of which continue to skew toward minor crimes. New Orleans truly standing for life would require ending racial profiling, not upgrading it with more funding. It would also mean admitting the criminogenic nature of our corrupt police and Orleans Parish Prison.

5. Doing Nothing – For many of us who have a certain amount of privilege (geographic, economic, racial, educational) we can, and some of us will, lock our doors and wait for the 24-hour news cycle to end. And then we will be complicit (see #3). Because it is other people’s problems, or because "tough on crime" responses sooth our anger and fear, or because we’re exhausted, confused, and disempowered by all the false solutions. But if we do nothing, those false solutions will continue to get the resources that we could use to truly transform the street (and state) violence in our communities.

I’m calling ELMO on our city’s tired and ineffective response to violence. Blaming individuals, demonizing Black culture, and ignoring the role of our murderous, violent, greed-driven and indifferent criminal justice system in creating more crime and perpetuating the conditions for homicide is not going to fix the problem.

I am angry. I feel frustrated that resources are going towards things that don't work. But I do believe that there are solutions and that a lot of the community-based, community-led work that is happening can make a difference.

In my next post, I will talk about some of the things I and my colleagues in the movement for true public safety do believe can stem the tide of violence in our city.

[1]The fact that the Mayor has turned away (for now) from the criminalization of this sacred space is a victory, an organizing win. But we must also beware the shallowness of the verbage of our elected officials. Landrieu could flip script at any time. This is the same mayor who has allowed these same communities to be targeted by stop and frisk and refuses to sign the Consent Decree, denying that our jail, where close to 40 individuals have died, is unconstitutional.