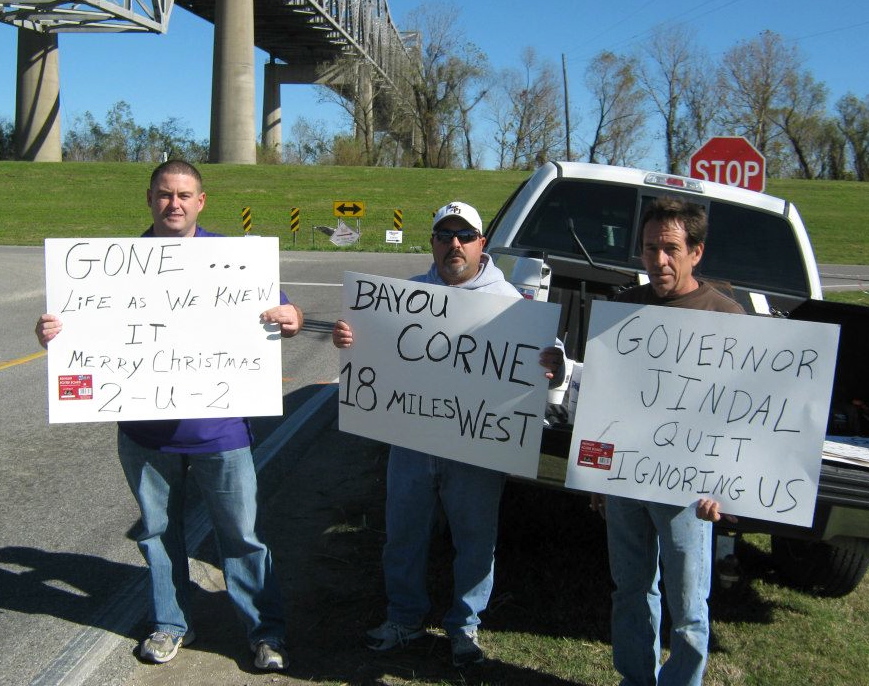 Over five months since the Texas Brine sinkhole first appeared over the Napoleonville Salt Dome, residents of Bayou Corne, Louisiana continue to struggle to be heard – particularly by Governor Bobby Jindal.

As the 8.5 acre sinkhole continues to expand, a handful of evacuees recently attempted to remedy that situation by displaying signs along the Governor's route to a nearby press conference. Unfortunately that request, like previous emails, phone calls and appointment appeals, went unanswered.

The State's handling of the Texas Brine Sinkhole Disaster, as well as the absence of the Governor, has become a further source of irritation among the 150 households who have been evacuated from their homes since August of last year. Many hope that the Governor will petition help from the federal government in addressing the catastrophe, which has also been characterized by methane bubbling, ground tremors and deadly hydrogen sulfide gas.

Additionally, Texas Brine has been scrutinized for what residents see as its lackluster attempt to publicly spin the cause of the disaster toward natural sources.

The denial of liability on the part of Texas Brine comes as little surprise considering the relationship of the company to a historically big polluter - the Occidental Chemical Corporation. That wholly-owned subsidiary of Occidental Petroleum, owner of the sinkhole property leased to Texas Brine, was ordered to pay $129 million back in 1995 to settle Love Canal, after years of trying to evade culpability.

In the recent months, while producing the mini-documentary “A Hole in the Bayou” for 28 Stones, I have had the opportunity to observe the unfolding of the Texas Brine sinkhole disaster, as well as interview several area residents about their concerns.

In a situation such as this, information changes frequently, but the bigger picture here has stayed the same since far before the first tree succumbed to what residents have lovingly named, “The Stinkhole.” For instance, last fall I had the opportunity to interview Randy Rousseau, who has been dealing with environmental concerns in the area for a decade.


VIDEO: Randy Rousseau reflects upon the history of the Grand Bayou incident and explains his views on what is happening today.

Sinkholes, although not to this size and depth, have been a recurrent problem; as well as, tremors, chemical releases and health concerns – including, according to Rousseau, high rates of cancers.

Likewise, state entities, who have persistently excluded this community from adequate information, have added to the chasm of distrust between the evacuees and those responding.

John Achee, a community advocate for Assumption Parish, spoke at length about his frustration with the Department of Natural Resources in particular, who was informed by Texas Brine of a possible breech of the cavern below the sinkhole back in January of 2011. Yet the community was not informed of this possibility until nearly three months after the first methane bubbling occurred in the bayou.

“It was certainly something withheld from our local government. To me, that put lives in danger. Our parish officials depended on DNR to give them correct information, for them to advise the people on what to do – to call an evacuation or not,” explains Achee.

VIDEO: Community organizer, John Achee, discusses communication and response from the State to the community.

Even Texas Brine seems to take issue with the handling of this disaster by the state. On December 28th the company filed a lawsuit against the Louisiana Office of Conservation to block Commissioner James Welsh’s emergency declaration and his ordering of two exploratory wells drilled by January 15.  The company states that Welsh, “ignored more reasonable, scientifically sound and safer methods.”

While Texas Brine believes Welsh has no clue, residents wonder when the company will get one. In a January 9 letter to The Advocate, Bruce Martin, vice president of operations for TB, stated, “Although there were no injuries or residential property damage, our company has been engaged in an extensive response program…” Immediately, homeowners began posting photos that documented property damages through social media.

Malic Chavez, a commercial fisherman who lives in nearby Belle River, agrees that Assumption Parish communities have reason to be concerned by the lack of knowledge by Texas Brine and others about the effects to the area.  He worries that his home and community in nearby Belle River has been left out of conversations concerning the disaster.

“I think that I drink from the same aquifer. I breathe the same air. We share the same environment – the ecosystem… I am a community resident of Assumption Parish… we all are at risk.”

With so much confusion surrounding the science and actions taken by both industry and the state, coupled with the consistent lack of transparency and inclusion, it’s little wonder that both those living in the evacuated area and those residing in areas near the disaster continue to question the response to the situation.

Consequently, residents who feel they have exhausted their attempts to call on the Governor for help are reaching out to the President himself. In an imploration on the White House’s petition site, residents say, “There is no light at the end of the tunnel for when [we] can return home, or have any kind of closure from this nightmare. This is not just a hole in the ground, and requires more resources than the state has at their disposal.”

“Residents just want this to end,” says Achee, “After five months of being ignored by the Governor, evaded by state entities, and discounted by Texas Brine, it’s enough. Whoever can bring this to an end, and let people move on with their lives, that’s who we need to speak to. And we won’t stop, until that resolve – whatever it is, happens.”