Idle No More Comes to the Gulf Coast

Last Sunday, January 20, I had the pleasure of seeing a short-term dream materialize, when over 100 folks traveled from every Gulf state to attend a gathering organized by Idle No More – Gulf Coast, of which I am proudly a part.

Idle No More is the indigenous-led movement that has been sweeping the globe since it began a few short months ago. Inspired by four Canadian First Nations women – Nina Wilson, Sheelah Mclean, Sylvia McAdam and Jessica Gordon, the action-based appeal surrounds issues of environmental protection, women, and indigenous rights.

Spurred in particular by Canada's Bill C-45 - which unapologeticallty violates aboriginal treaty rights and removes protection of sacred waters by overhauling the Navigable Waters Protection Act - Idle No More got a shot of adrenaline after Attawapiskat Chief Theresa Spence began a six week hunger strike highlighting, in part, the crushing poverty her people and other indigenous nations continue to live under.

The Idle No More - Gulf Coast gathering, which involved a Round Dance, prayers and discussions by supporting Gulf-based indigenous and environmental organizations, was hosted in partnership with Chief Shirell Parfait Dardar and Chief Albert Naquin of the Isle de Jean Charles and the Grand Caillou Dulac Bands of the Biloxi-Chitimacha-Choctaw. Like many of the Gulf Coast's aboriginal peoples, these tribes have struggled for generations against racial, social and economic disparities while being denied recognition by federal entitities. 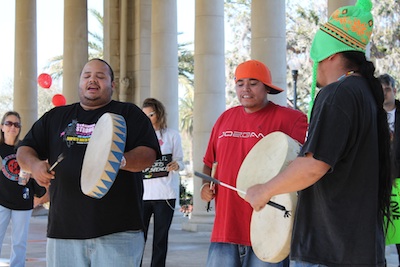 Far too familiar with the plague of climate change, they have also been the witness of a continuous string of natural and man-made disasters that have laid claim to no less than the soil under their feet, and through subsequent migration, threatened to take their cultural identity with it.

Additionally, and like far too many indigenous nations across the world, the tribes struggle with the environmental justice issues that too often accompany low-income and/or minority communities. Literally, these kind people live and work on a sinking land mass, induced by oil industry pipelines. They epitomize the offering that is the energy sacrifice zone of the nation – the Gulf Coast.

So it is of little wonder that the Idle No More movement and the altruistic actions of Chief Spence would strike hard upon their heart – it is an elated feeling to find out that you are not alone; and further, that you do not have to stand alone.

As for the Idle No More movement, we have yet to see what the long term legacy will be for the world. Some say that, like many recent movements, this too will fizzle and quiet with time and ego-induced infighting. And maybe they will be right, but what of it?

To some degree Idle No More has already accomplished more within the last few months than could have been imagined. From the coasts of New Zealand to the Outback of Australia, from the Black Hills to the rainforest, to the glaciered North, indigenous peoples have begun to claim their place as the protectors of Mother Earth and all of her people. Through enlightened empowerment, the historic solidarity that has been the nucleus of this movement, will survive in the memory of all who are living to witness it. It is without doubt, that the effect of those memories will endure and materialize in a plethora of yet-to-be-told circumstances.

In short, Idle No More has been a lightening bolt in a very dark sky, and whether it stays or rescinds quickly, we are beginning to see the stars again – and that is a great gift.