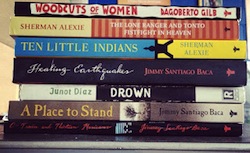 Crossposted from the Southwest Workers Union. On March 12, 2012 the Librotraficante caravan [from Houston, Texas] made its first stop in San Antonio with banned books in tow. These books–by Cisneros, Anaya, Anzaldua, Baldwin, Shakespeare, and many others–had been taken out of classrooms in Tucson as part of Arizona’s suspension of the successful K-12 Mexican American Studies (MAS) program. The MAS program led to higher student attendance, enhanced student performance, and increased student graduation rates; however its opponents accused the program of fostering resentment towards white people. Thus directly targeting Tucson’s Mexican-American Studies program, the Arizona legislature passed HB 2281 -- a law banning courses that promote the overthrow of the U.S. government, foster racial resentment, are designed for students of a particular ethnic group or that advocate ethnic solidarity.

After the banning of the Mexican American Studies program, organizers from Nuestra Palabra started the Librotraficante, or book-smuggling, movement, aimed at keeping banned books, our history and our stories in our communities and schools. The Librotraficante caravan established community libraries in cities across the Southwest, including Houston, San Antonio, El Paso, Albuquerque, and Tucson. In the past year the movement has continued to grow and flourish despite the suspension of the program.

In San Antonio, SWU’s Underground Library has hosted numerous readings, book brunches, community meetings, events, and workshops focused on writers of color. This month we celebrate our 1 year anniversary with a series of writing workshops and an upgrade in our cataloging system that will improve our book check out process.

Meanwhile, in the past two months there has been good and bad news from Arizona. In just the last week a federal court “distributed extraordinary power to the state legislature when it upheld most of the mean-spirited Arizona law crafted to destroy the transformational and innovative Mexican American Studies program in Tucson high schools" (via our friend Mike Sayer). Apparently the judge decided that the law failed to show discriminatory intent. The court order states: “Although some aspects of the record may be viewed to spark suspicion that the Latino population has been improperly targeted, on the whole, the evidence indicates that Defendants targeted the MAS program, not Latino students, teachers, or community members who supported or participated in the program.”

Despite being upheld, the judge ruled the section of the law prohibiting courses tailored to students of a particular ethnic group was unconstitutional. Additionally, last month a federal judge ordered Tucson Unified School District to end segregation and improve educational outcomes for Latino and African American students. This order is linked to a 1974 desegregation lawsuit filed by the Mexican American Legal Defense and Education Fund (MALDEF) in which the court approved steps the district needed to take to eliminate existing inequalities in education. The judge ruled last month that the school district “had not acted in good faith because over those 25 years the District had not addressed ongoing segregation and discrimination in TUSD, both physical segregation and unequal academic opportunities for Black and Hispanic minority students.”

So what does this all mean?? That despite this setback and faulty reasoning in last week’s decision to uphold HB 2281, ethnic studies can make a comeback. And supporters of the MAS program say the fight is not over and they will file an appeal. As an Underground Library dedicated to keeping banned books and ethnic studies in our communities, we will continue to support organizing efforts in Arizona and work to empower and educate our community in the years to come.

Please join us for our upcoming writing workshops and other events, or stop in to check out our cataloguing process. Thank you to all that have supported us this year by coming to our events or donating your time, books, furniture, or dollars to the library!