At May First Rally, Call to End Deportations 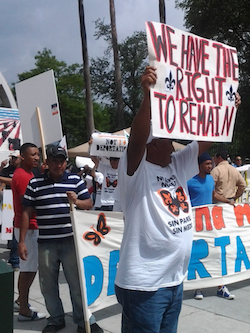 On May Day in New Orleans, immigrants and their supporters marched for just immigration reform and an end to deportations.

"We want just immigration reform…  that covers everyone and not just the people who have been here a long time… We don't want families to be separated," said Delmy Palencia, who herself was separated from her child and targeted for deportation after a domestic dispute brought the police to her home.

The rally and march was organized by the Congress of Day Laborers and the New Orleans Workers’ Center for Racial Justice. Jacinta Gonzalez, an organizer with the Congress of Day Laborers, commented on federal plans for immigration reform, "Immigration reform as it stands now, doesn't include everyone… if we're going to get this immigration reform that's going to give a path to citizenship for millions of people, we need deportations to stop now… The first step to citizenship is to stop deportations, and that's what the bill does not include."

Gonzalez pointed out the example of an undocumented immigrant named Lauriano Garcia-Zelaya, who is in the middle of deportation proceedings, "even though he would be able to legalize through immigration reform. " She says Garcia-Zelaya has been in the United States for nine years, he has two US. citizen children, and a wife here.

The march began with a rally at Armstrong park, then proceeded through the Central Business District to the offices of Immigration and Customs Enforcement (ICE), Senator Mary Landrieu’s New Orleans offices, ending at City Hall.

Milan Nicole, a member of the youth LGBT group BreakOUT!, drew connections between the criminalization of immigrants and that of LGBT youth in New Orleans, particularly through the use of “routine” stop-and-frisk stops by the NOPD, which critics say enable racial and gender profiling. "A lot of us out here are affected by the stop and frisk, this is how a lot of the problems and the issues come about," Nicole said. BreakOUT! will be rallying against stop and frisk policies today, May 9th at 10:30 am in front of NOPD headquarters.

A Community Forum tonight on Race and Citizenship will explore connections between communities of color and their exclusion from full U.S. citizenship. The Forum is hosted by the Gulf Coast Center for Law and Policy and a number of partners including the Congress of Day Laborers and VOTE, and will be held this evening at 5:30pm at the Ashe Cultural Arts Center in Central City.

William Sledge, who is African American, said he found out about the May Day March on Facebook. "I want to support hard working people that's trying to work and do things the right way, but they're being forced to go back to a country with less opportunities… I was motivated to come because I feel like this group of people were definitely vital to New Orleans coming back after Katrina as far as building homes and making things right."

******
Written with Rosana Cruz, Associate Director of Voice of The Ex-offender (VOTE).