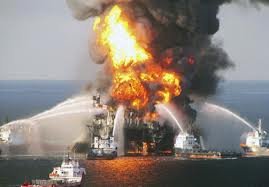 relatives of the 11 men who died and from other Gulf Coast victims of the 2010 BP Oil Drilling Disaster. Judge Vance will then decide whether or not to approve an agreement for BP to plead guilty to manslaughter and other charges and pay $4 billion in criminal penalties for the company's role in the largest oil disaster in US history.

I delivered the following letter to Judge Vance after she announced approval of the settlement [updated 1/29/13 12:51]:

First, I wish to thank you for the opportunity to speak to you today.

My name is Cherri Foytlin. I live in Rayne, Louisiana, am the mother to six beautiful children and  the wife of an oil worker. As a journalist I have been witness to this disaster since May of 2010, suffered economic loss due to the moratorium, and was sickened in Fall of that same year by chemicals used during the spill response. I am one of millions who have been adversely affected by this disaster, in a variety of ways, and as such, I urge you NOT to accept the criminal plea deal as proposed and endorsed by the Department  of Justice and BP.

To me, this settlement is nothing more than a broad brush attempt by BP's highest officials to evade full responsibility for a still evolving catastrophe. My fear is that without appropriate public scrutiny, the largest environmental disaster in American history will fall to the wayside like so many of this company's past transgressions.

I implore you to remember that this company is a serial corporate polluter and a serial corporate killer – not just in the United States, but all over the world – in Texas City, in Alaska, in the Caspian Sea, in the Gulf and now in Algeria, yet they keep managing to get away with little more than a slap on the wrist... and meanwhile people keep dying.

To allow BP to focus only on the day the Deepwater Horizon blew, and not to consider the general lack of safety culture described by the Chemical Safety Board in both the Deepwater Horizon and the Texas City refinery disasters, is to leave the Gulf of Mexico's ecosystem, industries, cultures and people at the mercy of a repeat offender.

This time they should be held to the fire.

For this reason, I fully support a full trial proceeding. The world must know the truth in order to prepare for, and prevent, future disasters of this kind.

The public deserves to know the history of short cuts by this company that led up to this event. They should know of troubles that started when the drill bit hit  the earth - they should know of the design flaws, about the firing of Curtis Jackson and Kevin Lacy for speaking out over their concerns for safety, about oil workers  who tried to notify London of the looming catastrophe, about ignored phone calls, emails, and morning reports*.

They should also know about Tony Hayward's EVERY DOLLAR COUNTS 2008 that mandated a 7% reduction in cost of all drilling operations in the Gulf of Mexico, and a 20 percent reduction of experienced senior management... and on...  and on...


Only then will there be true justice for a corporation whose general pattern is to focus on production and profit over the health, environment and safety of the communities and workers to which it depends.

Again, I must ask that the consideration of this settlement be not one dime less than the full extent of possible fines levied against this company, and yet I understand that both the DOJ and BP are in agreement of the plea as written and that it is highly unlikely this will occur.

Therefore I must add that even if the proposed deal stands, there must be the establishment of a Regional Citizens Advisory Committee both to oversee the coming regional restoration funds, and to provide safety monitoring, regulatory process recommendations, spill prevention and response training, and oversight to the industry itself.

I ask this as a citizen of a state where a large portion of RESTORE Act funds are slated go to an organization like the Water Institute, the touted “research arm of the state's coastal restoration program,” whose president, Charles Groate, was found to have recently provided tainted research which falsely favored the oil and gas industry. In Louisiana, where a 9-acre industry induced sinkhole can go unnoticed and unaddressed by a governor, where releases of know toxins like sulfur dioxide and benzene in the air, and drilling mud and hydrocarbons in the water are common occurrences, we desperately need citizen oversight.

In closing, I would like to say that the people, wildlife, ecosystems, industries and workers of the Gulf of Mexico are not trade-offs. We are depending on you to assign appropriate value to our lives, swift and fair justice on behalf of lives lost, and the foresight to allow us to be empowered with the protection of ourselves in the future.


Thank you for your consideration.