Tony Hayward Got His Life Back, Now How About Ours? 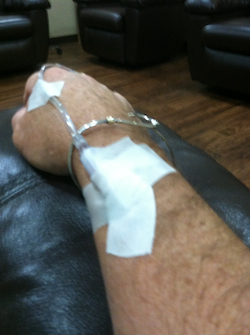 According to a recent multi-million dollar ad campaign, everything is back to normal again across the Gulf. I guess Tony got his life back too. I am just one of many who would disagree. I have told my story before but feel that it is so important to continue to speak the truth so the health crisis is not forgotten.

Almost three and a half years ago I attempted to salvage the end of our 2010 fishing season by returning to my life as a cast net fisherman in Destin, Florida. For the 5 months prior to that attempt I was enrolled in the VOO (Vessels of Opportunity) spill response program put in place by BP. I had no choice but to join. After all, it's hard to justify cast netting for a living amongst oil and dispersants, not to mention the fact that none of my customers were fishing. Some were still enrolled in the response program, most charter boats had no customers, and the private boats were not fishing for many reasons to include closures throughout the Gulf at the time and the fear of eating the seafood. Fishing was my whole life so it was only natural for me to return to the livelihood I was so proud to be a part of. People relied on me to be on the water every day and I loved the responsibility.

Throughout my many years of throwing a cast net I had experienced strange catches, some of which were considered dangerous by most people. I had even developed an immunity of sorts to the many types of jellyfish as being completely covered in their slime and tentacles was almost a daily occurrence. Most would have become sick and few could endure the exposures and work load we dealt with on a daily basis to make a living on the water. Salt water flowed through my veins and I wouldn't have traded my old life for anything in the world. I was content with my life. I was healthy, had a beautiful daughter, and my bills were getting paid.

Nothing I caught in my nets over the years ever made me sick like the chemicals did. I still remember the metallic taste in my mouth as I puked over the side of my Carolina Skiff that first night back on the water. My vision was blurred and the headache was so bad I could barely stand at the helm to drive myself home that night. Being unfamiliar with the symptoms of chemical exposure, I thought I was coming down with the flu.

Having a common illness never kept me from doing my job in the past so I tried to fish again the next night. After 30 minutes of casting I had the same experience as the night before only worse. There was blood coming from my nose, mouth, and ears this time. I remember thinking "what the hell is in this water that is making me sick? Is this crap still here!"  I threw in the towel at that point and once again struggled to get back to the dock. Little did I know that my life would never be the same from that night on. I was forced to leave the Gulf in November of 2010.

I have spent the last three years trying to survive. I had chemical pneumonia twice early on, barely survived that, and three years later still experience a number of symptoms related to my exposure on a daily basis. My early morning ritual most days is spent with my face in the toilet, most times checking to see if I am bleeding again or not. I have lost blood off and on from everywhere imaginable over the past three years and have learned that it means I am physically trying to do to much when it happens. A few examples of physically over exerting myself anymore would be taking my daughter to the park, walking any distance(now with a cane), washing the car, or doing things that most people consider normal daily activities. I have to rest a lot. The headache never goes away, I am haunted by Vertigo, nausea, lethargy, sleeplessness, shortness of breath, constant fevers, night sweats, short term memory lapses, cellular damage, immune deficiency, and pain in my joints and muscles that can be absolutely unbearable at times. Seven out of 10 on a pain scale is bearable and normal for me these days.

Please understand that I am not writing this to get sympathy. It still makes me sick that there are so many people like me that are experiencing the same situation, especially the children. I was one of the lucky ones. I found a doctor that put me through an extreme detox program that lasted over two years. I have had too many IV treatments to count.

That's when the money ran out. I continue to rely on supplements to maintain a tolerable level of health to get through most days. Every time the money runs out and I cannot afford the supplements, my health crashes. My immune system doesn't exist, or so it seems. There is no more money left to borrow anymore and I am buried in debt now. I have had several jobs over the past two years, In order to survive financially, but after being a fisherman all my life, finding a non-physical job that I qualify for has been nearly impossible. I have always been a fighter and my now 4 year old daughter inspires me not to give up. I only live for her now. I have no life outside of her anymore. If it wasn't for her inspiration and love I would not have made it this far.

I want people to know that everything is not OK. People, including children, are still suffering from the effects of this disaster. We still do not know the long term effects yet. We are talking about hundreds of thousands of lives, not just a single community or household. If "we the people" do not speak the real truth then all that "they the people" will see is the ad campaigns based on lies.

I want nothing more than the people and fisherman across the Gulf Coast to thrive and live prosperous lives through health, well being, and family, but the truth is too important to ignore anymore. I pray for all  every day and know that Someone I have become very close to is watching the monsters that have proven to us that our lives and livelihoods are expendable to them. I am glad you got your life back sir, now can we have ours too? Maybe it is too late to recover our loss but it is never too late to salvage what remains.

Previously: "The Gulf was My Church" – A Fisherman Reflects on Loving, and Leaving, the Gulf Coast by Joey Yerkes