We Got 99 Problems and the Super Bowl Blackout Ain't One 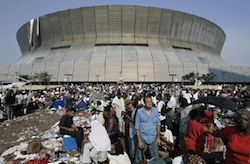 Good natured New Orleanians may be laughing about Sunday night's blackout during the Super Bowl, as a "now you see how we live" type moment for the rest of the country.  I'm actually feeling pretty PO’ed. Not by the black out, no. I am infuriated by the overblown language that some media makers have used to make hay over a pretty minor inconvenience, RELATIVELY SPEAKING, *ahem*. Specifically, I blew my top when Jeremy Fuchs of the Bleacher Report, referred to the 34-minute non-event as a "big disaster", and Patrick Riche of Forbes.com spoke of the challenges the city and the NFL would face in the "aftermath" of this debacle.

Dang. I think New Orleans would have gotten more sensitivity and self-awareness from the Dowager Countess (for non-Downton Abbey fans, that's not a lot of sensitivity or awareness). Maybe the pearl clutching response would have been laughable if we in New Orleans weren't still dealing with the aftermath of some real-life big disasters, and didn't regularly see policy and budget decisions made that prioritize football over actual things that matter.

When I read Forbes contributor Patrick Rishe write, "New Orleans may need a new football stadium before they play host to their 11th Super Bowl," I remembered the meeting I was in just last week, where local residents expressed their outrage that federal Road Home dollars, which many home owners desperately needed in order to rebuild after Hurricane Katrina, were in part diverted to renovate the Superdome after the storm.

In New Orleans after the Super Bowl outage, our hotel-concierge-in-chief Mitch Landrieu issued a statement assuring out of town guests, "For us, the Super Bowl isn’t over until the last visitor leaves town, so we’re focused on continuing to show our visitors a good time.”

Please understand, out of town guests, I want you to have a good time! But we also constantly hear local and state officials telling the nation, “Your party is real important to us! New Orleans is a place to come and have a good time!” The unspoken end to that sentence is, “no matter how much pain and suffering is still happening.”

This is the same mayor who claims that the city cannot afford to fix our deadly jail. Even though 39 people have died in Orleans Parish Prison since April 2006*, Landrieu’s legal department is actually fighting against the push for reforms. It's even petitioning to delay implementation of the previously-lauded consent decree with the Department of Justice over the long history of abuse and corruption at the New Orleans Police Department. The mayor who wants to make sure every last Super Bowl visitor has a fun, safe time in the city says we can't afford to pay for the reforms that are needed to actually save lives.

In a city where the prison is the only accessible mental health facility for many populations, where school buildings are rotting, where all of New Orleans East is still without a hospital, forgive me if I don’t give a damn about a football game being delayed for 35 minutes. I am too busy throwing shoes at my TV as the Mayor pimps us cheap, tarting up the places that least need improvements and regulation (A "clean zone"? A new street car to the French Quarter?) for the needs of out-of-town “guests.”

It's not only the tourism industry, and it's not only in New Orleans. Louisiana Senators Mary Landrieu and David Vitter continue to push to expand oil drilling operations in the Gulf Coast, despite the disastrous impacts of the BP oil disaster, the devastating health and economic effects of which people are still suffering nearly 3 years later.

This dynamic in which we service the rest of the country, regardless of the injuries of the Gulf Coast, dates back to colonial days, when the region was the place where an economy based on enslaving people made industries boom and made people rich. We see the dynamic today in how we bear the costs of producing the nation’s oil and gas on the quick and dirty, and in how private prison corporations can strike it rich caging the descendants of slaves (many of whom also work for no pay while incarcertated). New Orleans, Louisiana, and the Gulf Coast continue to be treated like a colony.

And rather than standing up for the people they're supposed to represent, our elected officials too often facilitate the exploitation. Just last week, Louisiana Governor Bobby Jindal’s latest round of cuts eliminated health programs for low-income HIV patients, first time moms, and children. As always, these cuts target the poor, which in this world means that Black people will be disproportionately harmed. This is just the latest round of cuts in a state that says it can no longer afford public schools, hospitals, or mental health care, but continues to prioritize prisons, evidenced by the fact that this is the second largest line item in the state budget.

Meanwhile, Jindal is driving an incredibly regressive tax plan that would shift the tax burden even more heavily on poor communities, Black communities and other communities of color, by cutting income tax entirely and increasing sales tax. Corporate interests, especially the tourism and oil and gas industries, continue to be rewarded with tax breaks and lax regulations for using Louisiana as their site of doing business. We vie for industries that come here, pollute, underpay workers and don't contribute to the infrastructure that we need in order to be a thriving, functional place to live for everyone.

So when I read national commentators with no awareness of this history or sensitivity to the economics, politics, and culture of the region, suggest that New Orleans ought to spend more money on a football stadium, I get more than a little irritated.  Entertaining the N.F.L. and its fans with a seamless spectacle is just not on my list of priorities.

Photo: New Orleanians wait to be evacuated from Superdome after Hurricane Katrina, from Hiphopwired.com
----------
Rosana Cruz is Associate Director of VOTE (Voice Of The Ex-offender). Previously Rosana worked with Safe Streets/Strong Communities and the National Immigration Law Center. Prior to joining NILC, she worked with SEIU1991 in Miami, after having been displaced from New Orleans by Katrina. Before the storm, Rosana worked for a diverse range of community organizations, including the Latin American Library, Hispanic Apostolate, the Lesbian and Gay Community Center of New Orleans, and People's Youth Freedom School. Rosana came to New Orleans through her work with the Southern Regional Office of Amnesty International in Atlanta.