Skip to main content
Climate and Environment
Media and Arts 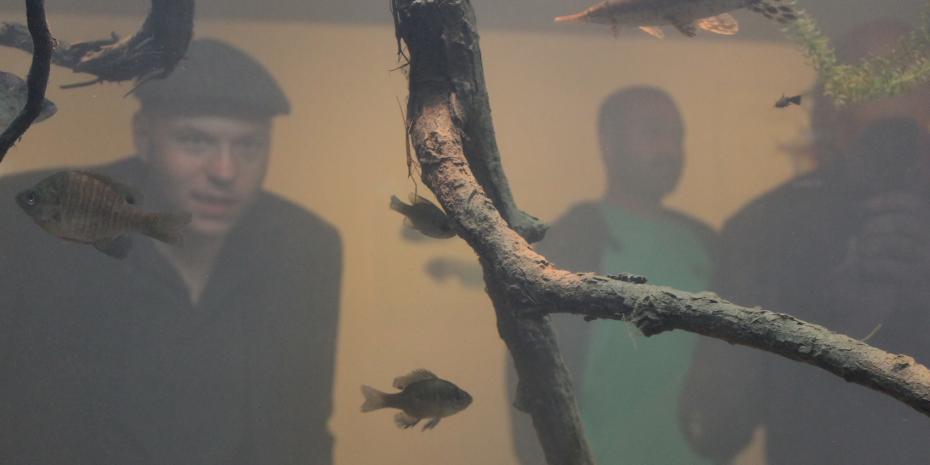 Brandon Ballengée wears many hats. And, as a visual artist, biologist and environmental activist, he often wears them simultaneously.

According to his website, he, “creates transdisciplinary artworks inspired from his ecological field and laboratory research.”

As Ballengée explains, “I’m kind of a strange hybrid mix between an artist and a biologist.”

His newest exhibit, “Eco Displacement – Ghosts of the Gulf,” is now on display at the Acadiana Center for the Arts (ACA) in Lafayette, Louisiana. As he explains, he considers his work an expression, or extension, of his discoveries in the field. “I just feel the need to make statements through the art,” he says.

PHOTO: Artist and biologist Brandon Ballengée looks through one of his exhibits, “Mississippi Delta Eco-Displacement,” which is a cross section of the Mississippi Delta inclusive of human impacts.

VIDEO: Brandon Ballengée discusses his motivation for “Eco Displacement – Ghosts of the Gulf,” now on display at the Acadiana Center for the Arts in Lafayette, Louisiana.

Like his art, Ballengée’s scientific focus has revolved around genetic deformities and population decline among animals – amphibians in particular, with recent studies focusing on the ecosystem of the Gulf since the 2010 BP Deep Water Drilling Disaster.

Ballengée explains, “Since 2010 I have been down here maybe, almost a dozen times. [I was] sampling, meeting people, collecting specimens, and kind of working on ideas for exhibitions which ended up being all a part of this big show that was held at the Ronald Feldman Center for the Fine Arts in New York, in 2012.”

“That whole show was supposed to come here next, which unfortunately did not happen. We wanted to do it at the ACA, but just had trouble getting all the specimens and everything - that was such a huge exhibition.”

Instead, the museum is hosting “Eco Displacement – Ghosts of the Gulf,” which will be on display at the ACA until January 25, 2015.

The showing is a three part reveal that includes a cross section of life and human impacts in the Mississippi River Delta, art pieces using creatures killed by the BP Disaster, and a projected video rebuttal to much of the information claimed by BP through their advertising campaigns since the incident.

“This aquarium piece… it’s basically what you don’t see [when] walking along, or… being in a canoe,” Ballengée says. “It’s all about subsurface life, and just to show how rich in biodiversity it is and all the beautiful animals that live in these wetlands. And also to show how they’re in constant threat to human induced alteration, and pollution, and just people throwing their litter in… All of the garbage and artifacts in the aquarium were found in local wetlands,” he adds.

The second part of the exhibit focuses on direct impacts of the BP Disaster through the loss of life during and since the spill.

“These are specimens from the Gulf of Mexico, different species that were found either after the spill, immediately after the spill, or sometime during the past three years that have washed ashore dead, or have been collected.”

Ballengée explains the chemical process used to create the prints as, “clearing and staining, so they end up looking like x-rays. They’re not really x-rays. What I do is I stain the bone red using certain kinds of dye, and then I use a digestive enzyme to make it transparent.”

“What I wanted to have them do, is to look like vibrantly colored skeletons, so they are kind of ghosts and apparitions.”

Finally, Ballengée faces off directly with BP’s rhetoric surrounding the disaster, which he says is often false or misleading.

“There is a third piece in the show which is called ‘Committed.’ So what I did is, that I worked with a team of folks and we managed to get copies of the BP commercials – like, ten of them. And literally went through line by line, everything that was being said in the commercial, and found scientific evidence to rebuke what was being said.”

Ballengée says that he and his team went to great lengths to be very specific in the science used to contradict BP’s claims in the display.

“We didn’t generate any of the content, we just researched it all. So after… reading through about 30,000 pages of documents, we managed to find snippets. And so what you see is the regular BP television commercial, and then flowing underneath is text which rebukes what’s being said.”

Ballengee adds that he is happy that his work is being well received, and has hopes of making an impact on the consciousness of those who view it.

“The reason to continue this kind of work, we got to make people aware of what is happening, and fight to restore as much as we can, and prevent further accidents from happening. It’s so important for future generations, but [also to] our generation, and all the other organisms that are found in this fantastic place.”