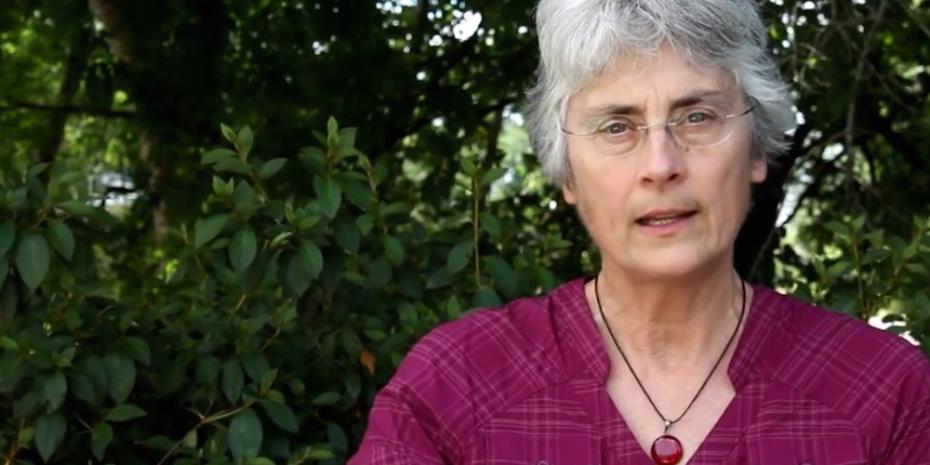 “I will share my personal story of flying over the Exxon Valdez and seeing this little three-football-field-long tanker in a sea of oil, and going, 'Okay, I am going to spend the rest of my life working on this and I am not going to go spill by spill, because as long as we drill we are going to spill,’” explained marine toxicologist and Exxon Valdez survivor Dr. Riki Ott during a recent gathering of the Unitarian Universalist Fellowship in Lafayette, Louisiana.

“[At the time] I thought that was a science issue... I believe that the industry exaggerates benefits and downplays the risks. You never hear about children being sick – you never hear about this. So I'm committed to getting that story out because I realize that this is a moral and ethical call.”

Ott, who first sounded an alarm of concern regarding the abundant use of chemical dispersant (approximately 1.84 million gallons) in the early days of the 2010 BP Deepwater Drilling Disaster, is once again touring the Gulf to share her story, educate others on the hazards of oil disaster clean-up and to discuss with affected community members available options moving forward.

“I've been riding this now for 25 years,” she said, “The ecosystem in Prince William Sound collapsed four years later. I feel your wake up call is still ahead of you,” she explained to the group.

Buras, Louisiana, resident Carla Desport, was interviewed for the story and stated, “Since the oil spill, I'm on 3 inhalers.”

“And this one right here,” she added, referring to her 10-year-old granddaughter's skin maladies, “She started out with a little sore (on her chin). And literally overnight it overtook her face and she woke up and looked like she had been set on fire.”

Ott explained that she was not surprised by the adverse medical issues that Vice chronicled. She had expressed concern for clean-up workers and residents as early as May of 2010.

“I was shocked when I realized that... people who were working the in situ burn team offshore were not using respirators. They were getting the respiratory problems, the central nervous system problems, dizziness, nausea, headaches… rashes – same as we had 21 years earlier with Exxon Valdez. I couldn't believe it... it was like a time warp or something. This is common to oil spill exposure, especially common, we learned, with the dispersant use.”

Ott, propelled by the plight of Gulf residents and clean-up workers who continue to suffer negative health effects from the BP Disaster, has returned to share her new project –  ALERT or A Locally Empowered Response Team.

“It has a hub of people, not just me, that bring national skill sets,” she explained.

“Whether its training for doctors or training for ordinary people to recognize clues - that maybe your sinuses are getting stuffy because the wind has been blowing from the Gulf, look, your dog is having problems too, you know, there's clues - ALERT is down to share with people what is appropriate environmental monitoring [and] what is appropriate community health monitoring – including for individuals.”

But Ott's attempt to empower folks to protect their health during an oil disaster goes further than one-on-one interventions. She also explained that pushing for an end to toxic dispersant use may be within grasp.

“There's a little bit of opportunity for us to work now to revise the National Contingency Plan [or oil spill clean-up], based on lessons learned from all of the oil disasters since the last time it's been updated, which was 20 years ago exactly – 1994.”

“Before this administration leaves office – the Obama administration – there's a very good chance that the EPA will open up the National Contingency Plan for revisions, based on lessons learned,” she added.

VIDEO: Dr. Riki Ott discusses the history of toxic chemical dispersant use as a combatant to oil disasters and outlines possible next steps with regards to the issue.

“The National Contingency Plan requires that as a priority human health is protected... Second, is that the situation is stabilized, we don't do any more harm. And three, we are going to physically contain and remove the oil. That is a clean-up.”

“Well, dispersants strike out on all three of those points,” she expanded.

“We know now that dispersants make it more toxic for people, they act like an oil delivery system. Strike out on stabilizing the situation, because oil plus dispersants make it worse for the ecosystem and people. Strike out on contain and remove the oil because once you add the dispersants, you push it into the water column – you emulsify it. It makes it impossible to remove the oil. So we have a law that conflicts with itself.”

Ott adds that the plan has not kept up with the times, noting no specific plans for tar sands or fracking chemical spills.

“These pipelines, these rail cars, are going by our schools. They're going by our hospitals. They are going right through our urban areas where we live, and work, and play, and pray – we have got to tighten this whole thing up.”

“It's all up to us whether it's a clean-up or a cover-up during oil spill response.”