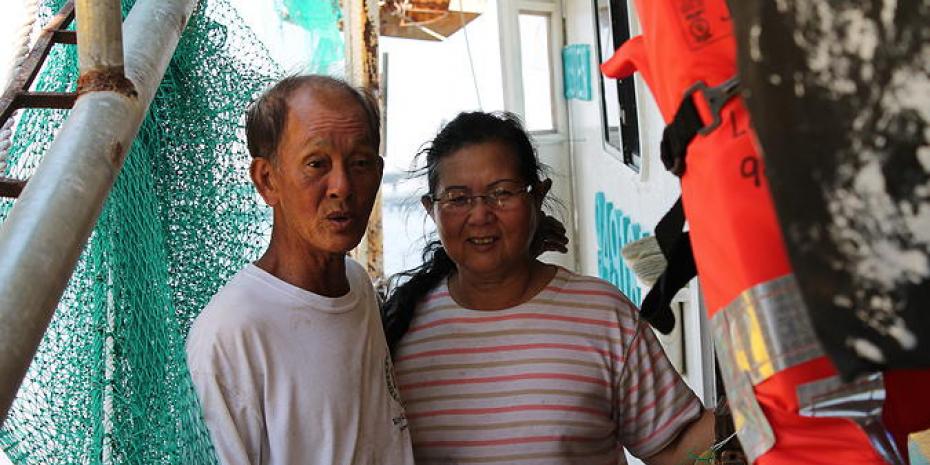 Crossposted from the Life Support Project.

Undeterred by the blazing sun and high humidity of a mid-August afternoon in Biloxi, Mississippi, Tuat Nguyen and Bien Do moved nimbly around their shrimp boat, making last-minute preparations to leave for Lake Borgne, where the Louisiana shrimp season would open in a few days. Watching them work, moving with ease from one end of the boat to the other, climbing up and down, it was hard to believe both are in their seventies and each has been making a living on the water for more than six decades.

While Bien made final preparations to depart – they’d already had mechanical problems earlier that day – Tuat, who speaks only a little English, invited community leader and interpreter Thao Vu and myself to sit down for a few minutes at the small table in the boat’s tidy galley.

Tuat says her father taught her how to shrimp when she was only 8 or 9 years old. The invention of GPS and modern technology were still decades away, so at night the moon and the stars were their guide. She remembers following the sun during the day, following it as it moved from east to west. Everything was done by hand. Someone would blow a horn to guide them into the dock after dark.

She says her husband, Bien, can’t remember a time he didn’t work on a boat. He’s a hardworking oyster fisherman and a shrimper, livelihoods that go back generations.

After leaving Vietnam, they settled in Biloxi, drawn by the warm Gulf waters where they could make a living dredging for oysters and shrimping. The Gulf’s abundance and their own hard work allowed them to be productive, independent and part of a thriving community.

But that was before BP.

Like so many across the Gulf Coast, Tuat says she struggles not to break down and cry just thinking about the past four years. But she’s also determined to make sure her story and the story of her community is not lost amid BP’s commercials and what she and others see as her own government’s willingness to ignore her and her now struggling community.

Before BP’s well spewed an estimated 4.9 million barrels of oil into the Gulf, Tuat says Gulf oysters were healthy and plentiful and many days she and Bien would easily harvest their sack limit. Some days they’d leave at 7am, get one boat’s limit by noon and then take their second boat out to get its sack limit. Oyster season was almost seven months - days were long and the work was hard, but they earned a living and they were able to raise their children and some years even get a little ahead.

Now they struggle just to keep their utilities on and the boats’ docking fees paid. They lose money on too many trips, often spending thousands on fuel and ice, but only bringing in a couple hundred dollars worth of shrimp or oysters.

Tuat says what is happening after the BP disaster is economically devastating to oyster boats, and particularly hard on Vietnamese fishermen. The 2010 season was closed completely to oyster harvesters. In 2011, the season was only two weeks long and wasn’t open for dredging, a harvesting method used more by the Vietnamese-owned boats, but only to tongers, the method more common with the white-owned fleet.

2012 saw a one-month season for both dredging and tonging, and 2013 had a season that was open for about five weeks.*

Tuat says she and Bien filed an economic loss claim, but have been compensated only for a short-term claim and only for one boat. And that compensation doesn’t come close to covering the loss they’ve suffered for shrimping and oystering. Using the experiences of others in the community as a guide, Tuat isn’t hopeful they will be approved for the rest of their losses. Even if they are, economic claims don’t adequately address long-term losses.

She says like many in the Vietnamese fishing community, they were pressured to take a $25,000 quick-pay and were told if they didn’t sign on the spot, the funds might not be available in the future. Many later found out accepting a quick-pay claim also signs away any right to future claims.

And she feels that engaging with fishermen is key. Tuat says officials need to get out to the docks more often and get to know fishermen and their struggles. She wishes fishermen had better representation within the agencies and wonders how someone who works behind a desk can understand what it’s like for fishermen, notoriously independent and self-sufficient, to work all day only to have their utilities turned off, to not have enough food to eat, or to have to rely on social services.

And that’s not counting doctor’s visits and medical expenses.

Since the BP disaster, Tuat’s been plagued by headaches and breathing problems and Bien has had respiratory issues as well. He’s been prescribed numerous medications. Some been completely ineffective, some have worked short-term and none have worked longer than a few weeks before the symptoms returned. All were expensive.

Neither Tuat nor Bien worked clean-up, but they and others who were in the Biloxi area during the summer of 2010 say the smell of Corexit, the dispersant used to sink the oil, often hung in the humid air, traveling inland, particularly in the evening.

Even if they weren’t exposed initially, fishermen are re-exposed on the water and Tuat blames the dispersant and oil mix not only for human health issues, but for the poor health of sea life, giving the post-BP spike in turtle and dolphin deaths as examples. Like other fishermen across the coast, she points to the lunacy of blaming shrimpers for the spike in turtle deaths during a time when shrimping was closed due to the oil and no shrimpers were on the water.

Tuat suspects the dispersant is responsible for oysters’ inability to spat and questions the wisdom of any restoration projects undertaken with poor water conditions. And right now, she says the water is not healthy - if the water were healthy, she says, there would be a longer oyster season and more abundant oysters.

With that, Tuat gets up from the table and readies the galley to pull out. As we climb back onto the pier, she passes Thao a bucket of shrimp to share with community members in need, a generosity Thao says is the norm.

Bien and Tuat are prepared. They’ve got their fuel, the equipment’s been checked, they’re loaded up with ice, the galley is stocked with provisions, and between them they have more than twelve decades of experience on the water.

Now they can only hope to find enough shrimp to make it worth the trip.

* Note: Since our interview and in spite of what’s been called “pathetic” reef conditions, Mississippi officials reluctantly agreed to open the fall 2014 season in late October, but only for tongers. Dredgers like Tuat and Bien will have no Fall season at all. http://www.sunherald.com/2014/09/16/5802784_mississippi-sound-oyster-sea...

** Note: Since our initial interview, the State of Mississippi released it’s early restoration Phase III projects, which includes the Hancock County Marsh Living Shoreline Project, although it’s not yet clear how or if the project will engage fishermen.