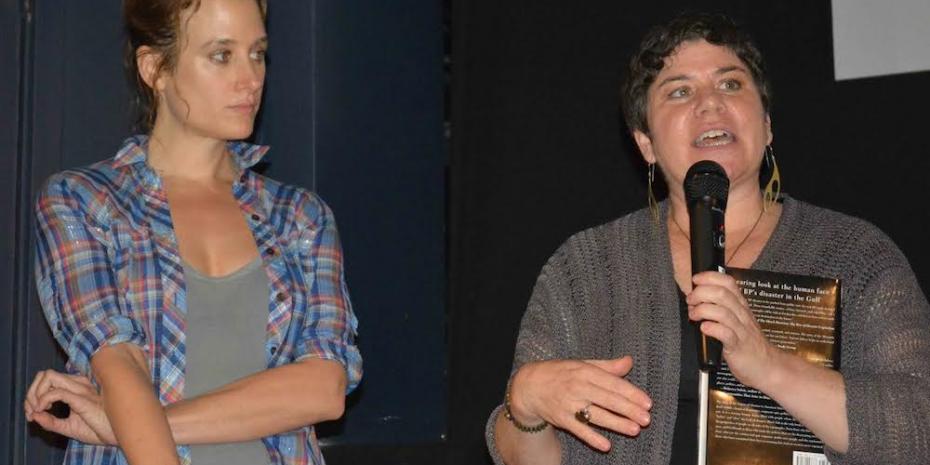 Since 2010, I've followed the development of Margaret Brown’s documentary The Great Invisible, which explores the BP disaster with great care, artistry and respect through the eyes of people on many sides of the issues, from survivors of the rig explosion to unemployed seafood workers and representatives of government and industry. Brown was drawn to the story when her father sent her photos of oil boom lining the bay near her childhood home in Mobile, Alabama.

I first learned Margaret was making the film when Chicken & Egg Pictures responded quickly to the disaster by supporting documentaries by three women filmmakers, including Margaret and me (the film I made is Come Hell or High Water: The Battle for Turkey Creek).

The Great Invisible won the Grand Jury Prize at South by Southwest  and is now in theaters, including upcoming screenings in New Orleans and Houston. I attended a screening last week in Berkeley, California and I thought I would share some of the Q&A discussion there with Margaret and Antonia Juhasz, author of Black Tide: The Devastating Impact of the Gulf Oil Spill.

After the film, Antonia introduced Margaret and began the Q&A by recounting her recent trip to the site of the spill. Questions came from members of the audience.

Audience Question: I had a question about the initial reporting by the President, of the amount of oil that was coming out of the well. It was grossly underestimated and I was wondering what the magnitude of change was when the real facts became known.

Audience Question: I have two questions. What happened with the $20 billion dollars (in BP fines) and what will happen with the oil at the bottom of the sea. Will it just sit there forever?

Margaret: I’m not exactly sure at this moment (about the amount paid out to date). The reason the film isn’t more environmental in scope – I actually have a lot of footage I shot that is naturalist and environmentalist and more that part of the story. But I kept coming back asking the same questions every year and the answer was always, “We don’t know yet.” Recently there was an article that came out, I think it was UC Santa Barbara, where they said I think it was 30 years to determine what the impact is. I think it’s hard to say but maybe you (Antonia) have something more to say on that?

Antonia: The $20 billion was a set aside for the claims payments. But that’s only one part of the money that BP has had to pay out. There’s a good news and bad news part of the story. Part of the good news is that as a result of the Exxon Valdez oil disaster, new legislation was put in place. So during the Bush administration we actually did see new laws put in place, and that was the Oil Pollution Act (of 1990). And that required (this didn’t exist before), that an oil company that causes a disaster is financially responsible for the disaster, is responsible for the clean up – is responsible for everything. And that $20 billion dollar set aside that got portrayed as this generous thing BP is doing, that is this great deal that the White House came up with, was required under law that BP actually had to cover those expenses. BP has been unbelievably stingy with what they’ve paid out. But they’ve paid out about $40 billion dollars so far for the clean up, for the stopping of the spill. It took 87 days for the cap to get put on the actual site of the spill. But it took 152 days to actually cap the well – a full cap, what was considered the well is actually sealed. The only thing they had to do to seal the well was to drill another hole. So then they intercepted the original pipe, sealed in the original spill site, and that took 152 days. That’s the only thing they know how to do, to stop a deep water spill. So in some ways the three months was lucky. So BP has paid out about $40 billion but they’re fighting every single place that they’re supposed to be paying out money. So, a health agreement settlement was reached, they paid out I think the number is 164 claims out of 200,000 I believe that have been filed under the health settlement. They’re fighting the economic settlements. They’re fighting left and right all the way to the Supreme Court at this point. [Author's Note: The Supreme Court has since declined to hear BP's appeal]

Margaret: I actually wanted to add one thing to that… I think one thing that’s really egregious is that off shore oil companies – the cap is at $75 million. So actually – this is the irony – if it had happened to a smaller company, which could happen, it could be on the taxpayer next time. BP actually has enough money – even though they are being really stingy as you’re saying – they can take care of it. But if this happens again, $75 million is the cap and that hasn’t changed. And obviously it’s a lot more damage than that.

Audience Question: Margaret, I was wondering how you were received by the locals as a documentarian, as a filmmaker. Can you talk about that process?

Margaret: In the Bayou, even though I’m from Alabama, you’re also an outsider. I’d say, “I’m from Mobile,” which is 23 miles away from Bayou Le Batre. They’d say, "What’s your zip code, Honey?” And I’d say “36608.” And they’d say, “Alright, you’re not from around here.” So there’s always that separation of class. At the same time, I kept coming back and I kept coming back. So after a while, when you’re riding around in a car with Roosevelt (Roosevelt Harris, a church volunteer in the film who distributes food to unemployed seafood workers in Bayou La Batre) for two and a half years, people know who you are. So after a while that goes away, I guess, to a degree. It never really goes away. It’s just putting in the time. I just think you have to put in the time, no matter who you’re talking to, across anything. The hardest interviews to get were with Doug Brown and Stephen Stone (survivors of the Deepwater Horizon rig explosion), by far. Because their wives were really scared this would put them into deeper depression. They didn’t know if the film was a good thing or bad thing. So that was much harder than the oil executives. Much harder than the people in the Bayou. It was just hours on the phone with their wives. I mean I could never say this isn’t necessarily going to be bad, but talk about, “This story needs to be told. This story hasn’t been told.” And that was the most time, I think.

Audience Question: Is the regulation of the oil industry federal or does the state have regulations?

Antonia: There’s basically the federal authority comes on at different distances from shore. It’s usually between 9 or 12 miles from shore. These are drillings that are, you saw, 100 miles offshore in 5,000 feet of water. That’s all federal. So anything that’s about 12 miles or so offshore becomes federal. But OSHA doesn’t have any jurisdiction on offshore rigs. The regulation is between the interior department and the Coast Guard. One of the things that happened in the hearings after the disaster was that a huge lack of discourse between those agencies and the Coast Guard was constantly shocked at hearings about how little actual regulation was taking place on the rigs. Interior is responsible for everything that has to do with the mechanics and Coast Guard is responsible for everything that has to do with the water. And the Coast Guard would be looking at the Interior folks like, “Are you kidding me?” There was basically no regulation happening. Unfortunately that’s still the case.

Audience Question: Is regulation being held up in Congress?

Find out more about the film and where it is screening: http://www.takepart.com/great-invisible

Read a Mobile, Alabama viewer’s recent response to the film.

Read an interview with Margaret in Filmmaker Magazine.