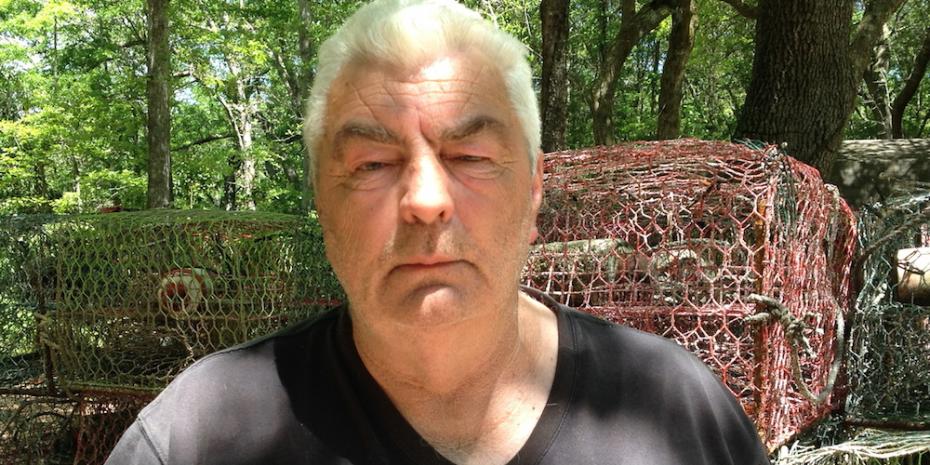 About a week after the oil spill started, we got the call from the Alabama Department of Marine Resources (DMR). We had to hurry up and get our traps out of the water because we wouldn’t be able to get them once the oil came in. To meet that deadline, we went out in winds so high they broke the windows out of our boat. We had no idea what was to come.

We couldn’t crab and we had to eat, so my son Ralph and I worked clean up. I have two sons. One went into the Marines. Ralph’s worked with me on the boat since he was just a kid - we’re a team.

“Weathered boom” is what the supervisors told us to call it, not “oiled” boom.  The reason it was called “weathered” is because it was so much cheaper that way – if it was “oiled” it was very expensive to dispose of.

So we’d haul those big loads, 7,000 – 8,000 lbs. of “weathered” boom, back to a barge and transfer those bags onto to the barge. In order to do that, we’d move our boat alongside the barge and throw the bags up. The barge was up about chest high or maybe higher. We’d lift those bags and pass them up and we took it right in the face - the water and oil dripped out of those bags and fell right back down on us.

As far as safety gear, they gave us safety goggles and a box of Tyvek suits [coveralls to protect against hazardous materials], but we couldn’t even get them on – all they sent were smalls and mediums and we’re both big guys. The supervisors said to make the best of it and we did try to put them on, just to cover us up, but the suits just ripped to shreds.

Ralph and I noticed how many baby crabs were drawn to the boom. There’d be hundreds, thousands of baby crabs in that boom. It had to have had a terrible domino effect. With all of those babies going to the landfill in that boom, we wondered what would be left to reproduce? We’ve always took care of our little crabs – they needed to grow. We’d throw the little ones back.  We knew something wasn’t right when that many babies were dying – ending up in the landfill with the boom.

There was a safety meeting every morning. Well, they called it a “safety” meeting, but it was mostly warnings, telling us what not to do if we wanted to keep working. Being fired was a daily threat – if you had any problem with them, they’d threaten to fire you. BP didn’t want us giving interviews, they didn’t want us talking about what we saw out there.

After a while, we realized that we’d be called in when the dispersants were being sprayed. Sometimes they’d call us in due to “bad weather," but there were no thunderstorms or anything on the radar. But we were close enough that afterwards we could see the marine life trying to come out of the water.

And we’d see dead dolphins, especially early on. One morning I came across a sea turtle. We were supposed to call it in, so I did. They told me to stay with it, so I did – for about seven or eight hours. Eventually it beached itself in the grass where no one would see it. In all those hours, Marine Resources never did pick it up. I don't know if it was ever counted or recorded.

And then there was the guy that said he wanted his life back.  I don’t think about it in terms of myself, but you know, there were guys that died out on that rig.  Those men had families - they were good men, they were worth something.  And all he [Tony Hayward, BP CEO] could say was he wanted HIS life back.

We noticed right away we just didn’t feel well. Our eyes would be burning. Prior to the oil spill, Ralph was fit, he’d run and jog - he had no problems catching his breath. Since BP, he’s had pneumonia, he’s congested and has trouble catching his breath. He’s had terrible joint pain, bronchitis. He used to be a hard worker, could work through anything. But now, even if the crabs were back, he’d have a hard time working.

I’ve had pneumonia, trouble breathing. My wife’s had breathing problems and had pneumonia. Before BP, we used to walk in the bird sanctuary over on Dauphin Island – maybe 3 or 4 miles around. Now she can’t even make it up a flight of stairs.

Our wives didn’t sign anything or willingly put themselves in the middle of that, but they washed those clothes and they were just as exposed to it as we were. Before washing, they’d have to take the clothes outside and put them in a big bucket, then use a plunger, up and down, up and down. After that, they’d take them inside to the machine. Even the “clean” clothes couldn’t go in the dryer – the heat would make them smell.  So they dried out on the line. And that happened all across the coast - there’s no telling how many other women are affected.

Ralph’s wife, my daughter-in-law, was diagnosed with breast cancer a year or two after the spill, and I’ve always wondered about it. She was young and healthy, not a smoker, with no family history of it. And it was a very rare and aggressive kind of breast cancer. The whole time she was going through treatment we kept wondering - how much did it all have to do with all those clothes she washed. We just don’t know.

We went back to crabbing fairly quickly that fall and the crabs were good at first. But then they fell off and they haven’t come back. After that fall, that was it, it’s been a steady decline.

We’d have been better off if we’d just stayed home. But it never was like that before, we could put effort into it, we knew where to go. We’ve never been on public assistance before, but now, you never know. We’d rather be working. We want to work. But the crabs just aren’t there.

We didn’t get a lawyer for our claim, because we thought BP might be fair. They seemed real reasonable at first, but it reached a point in the fall of 2010 where they kind of just shut down. They acted like we were liars and we had to send the same documents over and over again. I had to prove what I was – a commercial crabber. The Department of Marine Resources printed me copies for the past 30 – since the DMR started selling a license to crab – and BP still had doubts. The DMR printed out copies of our landings, we had trip tickets from way back.

How could they think we aren’t fishermen? Everybody knows what we do for a living, because we’ve done it forever.

They have a place for subsistence claims, for what you use yourself. We would always have a freezer full of fish, eat them 3 – 4 times a week for dinner. But they came to Ralph’s house and said they couldn’t approve a claim for $1500 a year. They didn’t pay anything on that. And we thought about it, our claim was very reasonable.

Yesterday we pulled up our traps and stacked them in the back.  We can’t take them back out - we’re losing money every time we do.  In the past we’ve done 600 lbs. in the spot we just came from, sometimes more. Yesterday, we pulled in 35 lbs. A lot of traps had nothing it them.  Zero.

A regular old run of the mill crabber can’t make it anymore. And that’s really starting to frighten me. We just had to sell our bigger boat for about a fourth of what it was worth. We couldn’t use it any more.

It’s not so easy to walk away from it like people might think. There’s all that money tied up in it and then there’s our family history. I can go back four generations, five generations for Ralph. And that’s just what’s documented – we know our family’s been fishermen even further back than that.

When they were little, I had my boys on a boat with me all summer. They had a pair of crab tongs in their hands sorting crabs from the time they could stand up. But crabbing’s just not there anymore - it looks like we’ve lost it.

When we were working on the clean up, every day BP kept telling us how we were lucky to have that job. One day I finally told them no, we were lucky before the spill. We loved what we did and we always made our living doing what we loved to do. We never had to struggle.