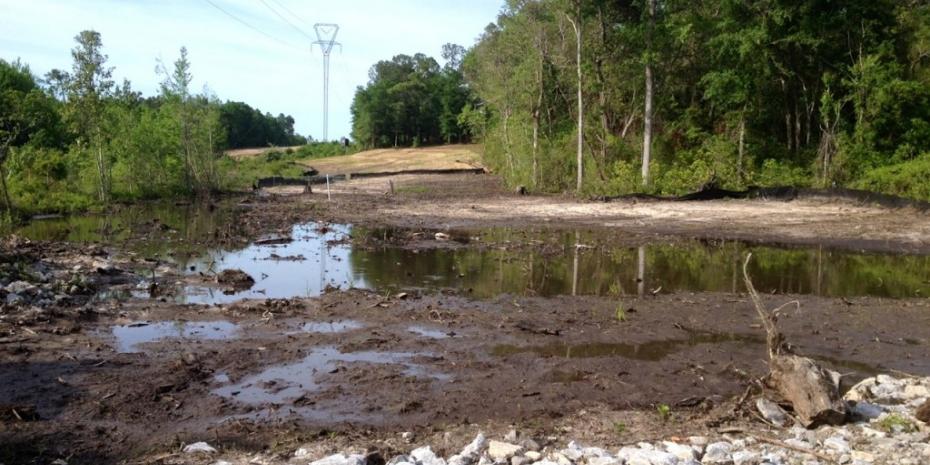 Originally posted May 2nd in the New American Journal. The first foreign substance flowing into Mobile’s drinking water from the new crude oil pipeline is not oil. It’s mud — and whatever welding and other construction debris got stirred into the disturbed earth of the pipe’s broad right-of-way through the watershed of the metro area’s reservoir Big Creek Lake.

About a foot of rain thundered down earlier this week and the pipeline route, shaved of trees and brush, was an easy target for the gathering runoff. Sod spread on the bare land retarded erosion in some stretches. But in others the unruly waters carved deep furrows. Scattered silt fences were bent down and broken in places. Much straw spread as ground cover washed away or mixed into the mud.

The result was tributaries of muck leading into the creek that feeds the reservoir’s nearby arm with the water system’s sole intake plant. Some pools of dark, reeking glop left behind suggest what must have gone down into the lake.

Contractors here often conduct their projects in ways that allow ugly events like this to happen. When confronted they usually act astonished about the deluge which occurred in this statistically rainiest American city.

But Plains pipeline company cannot rely on these standard excuses because for the past year it has been trumpeting its commitment to safety, the community and the environment. It did this in news reports, ad campaigns, courts and meetings of governing bodies. The effort was necessary because of the doubts that arose among the public about a company that would even propose putting a high-volume, high-pressure crude oil pipeline through the source of drinking water when routes avoiding the watershed were possible — assuming a pipeline was necessary at all, which many critics did not.

In response Plains repeatedly pledged to observe the strictest standards of safety and care in all aspects of the pipeline: planning, construction, operation and maintenance.

If the practices actually followed with the buried, invisible pipeline are no better than the ones apparent now on the surface when the first heavy rain hits, then mud won’t be the worst substance going into the reservoir.