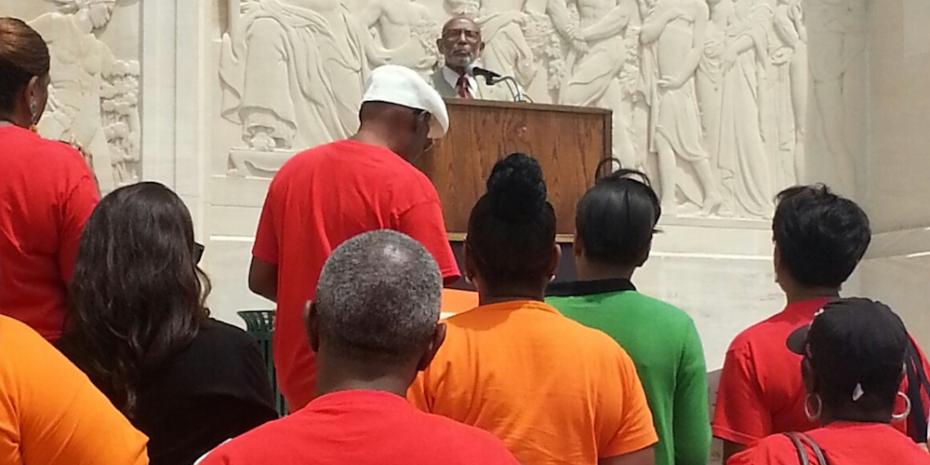 On April 24th, dozens of parents, students, and community advocates from across the state rallied on the steps of the State Capitol in support of safe and supportive schools for all Louisiana students, and in opposition to Senate Bill 652. The draconian bill would further criminalize our children in a number of alarming ways (outlined below) that are more about expanding the “school to prison pipeline" than promoting safety. Family members urged State Senator Elbert Guillory, the bill's author and Republican candidate for Lieutenant Governor in 2015, to come and speak to the group to explain why he felt SB 652 was necessary, considering that teachers are already permitted to call law enforcement as needed to protect their students and themselves in the event of imminent danger.

While explaining his logic to the many parents, students and other advocates Senator Guillory told us that he understands our concerns as a parent himself who raised a “problem child”.  It became abundantly clear why such a punitive and illogical remedy would make sense to someone who thinks of his own child as a problem.  In 2010, Families and Friends of Louisiana’s Incarcerated Children (FFLIC) worked to pass legislation that required teachers to receive classroom management on evidenced-based practices such as positive behavioral interventions and supports (PBIS), conflict resolution and restorative practices that work and help keep children in school. PBIS helps teachers and parents understand that children are NOT problems, but children HAVE problems. We contend that Senator Guillory (and laws like SB 652) is one of those problems.

Perhaps we need to train the policymakers on positive approaches and what really works for children and in the long run our communities before they can be elected into positions of power where they should have everyone in their best interest!

Unfortunately, on May 1st the bill passed favorably out of Education Committee.  We have been working with many allies to educate lawmakers to oppose this bill because if passed, SB 652 would:

Throughout this process our parents continue to learn how important their voices are not only during the legislative session but during election time as well. It is very important to make sure we elect people who are focused on and dedicated to caring for children and communities, not setting their sights on Lieutenant Governor or advancing their careers on the backs of those most vulnerable.