Skip to main content
Climate and Environment
Economy and Work 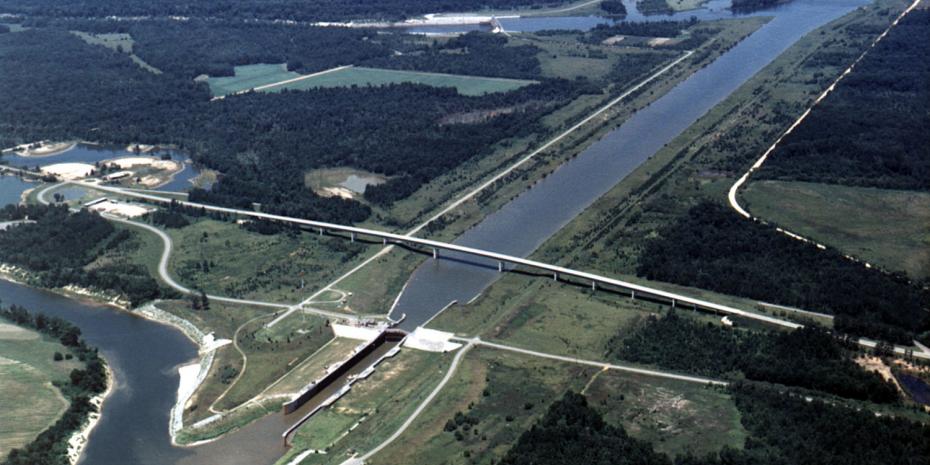 Back in the 60's I could always tell when election time was near. First, city equipment would show up to clean the streets and clear out vacant lots. Then the politician would make an appearance at the Elks and buy a round of drinks for everyone in the place. The next day he would sponsor a chicken and fish fry for the community. At the height of the community outing he would make a speech. That speech would always promise everything but deliver nothing.

One thing I have learned over time is numbers never lie. During the late 1960's through the mid-1970's there existed a large governmental project to widen and deepen the Tennessee-Tombigbee Waterway, which stretches 234 miles to connect the Tennessee River to the Tombigbee River in Alabama. It was a multi-million dollar project that most Northern politicians considered a waste of government money. However, the Southern politicians banned together and yelled “jobs, jobs, jobs!” They argued that completion of this project would mean jobs for years to come for Alabama and Tennessee residents. They said that this project would take business away from the Mississippi River and barges would run up and down the Tennessee-Tombigbee Waterway 24/7/365. In addition, they said that Mobile would be the “New Atlanta. That the completion of the Tennessee-Tombigbee Waterway project would do for Mobile the same thing that the completion of the International Atlanta Airport did for the economy of Atlanta, when it turned Atlanta into the "economic hub of the south".

At that time I was in college in Virginia and upon graduation spent time in the Marine Corps in Quantico, Virginia near Washington, D.C. For six years living near the nation’s capital, I followed the national debate about the Tenneessee-Tombigbee Waterway. When my active duty period ended, I listed three places I wanted to live, all in the South: Mobile, Alabama; Atlanta, Georgia; and Huntsville, Alabama, in that order. Mobile was at the top of the list because it was home and also because I believed promises made by politicians from my hometown. I listed Atlanta next because Atlanta was becoming the place to be. Good jobs, good people and good fun. Huntsville was next because I had friends there and they all had good jobs. NASA had moved there and so had Hughes and Boeing Aircraft Companies as well as other Fortune 500 Companies. I arrived back in Mobile on a Friday. I spent the entire weekend partying with my high school friends and learned that a position was available with the company that my best friend was employed with. He told me to give him one day to talk to personnel, put on a suit and tie and come for an interview on Tuesday. I did and went to work on Wednesday. That job and company had nothing to do with the Tennessee-Tombigbee Waterway. The plant had been constructed years before the Tennessee-Tombigbee Waterway had begun. The jobs promised from the Waterway did not materialize for my community.

Photo: Howell Heflin Lock and Dam on the Tennessee-Tombigbee Waterway, near Gainesville, Alabama. Photo by the US Army Corps of Engineers.

It became a running joke that the Tennessee-Tombigbee Waterway was “the biggest man-made fishing hole in the United States”. Today, there are places along the waterway where you can barely get one barge through, let along barges traveling in opposite directions. The Mississippi River is still considered the waterway of choice for barges traveling north to south and vice-versa. Politicians that pushed that project through got their rewards and are now living the “life of Riley” in retirement. Construction jobs were available during the 10-year project, however those jobs all went away with the completion of the project. A project considered to be a job creator must create jobs that are sustainable years after project completion.

I think of the claim of “jobs, jobs, jobs!” made by former Councilman Carroll as he tried to convince Africatown Residents to accept the construction of a trucking company in the community. I know that unless you have a commercial driver’s license the only jobs available at any trucking company is that of a truck washer or clean-up person. I am told that when Berg Pipe Company talked to the community they made a promise of “jobs, jobs, jobs!” However if you examine a list of their employees you will not find a member of the Africatown community on their payroll. When the pipeline company laid crude oil pipes through our school yard, I counted about 15 trucks all with out of town license plates doing the work. When someone promises jobs, they must be willing to do everything possible to hire the locals. They must study and understand anything that could hinder hiring the locals, and then help locals to overcome those obstacles and become part of the workforce. That's called going beyond the call of duty. It's also called caring.
 
To say that construction of super crude oil storage tanks in the Africatown community is this great job creator is irresponsible. The Port of Chickasaw, adjacent to Africatown, once had warehouses filled with lumber waiting to be shipped overseas. Today, most of that property is owned by businesses building storage tanks. There are about 35 complete and more are under construction. When lumber was the primary product there were plenty of workers hired doing various jobs. Once a storage tank is complete there is not much need for employees, other than someone to load and unload vessels and check for leaks. Just take a casual drive on the east side of the river near the Africatown Bridge. You won't see many workers around those storage tanks. The small lumber yard that used to belong to Gulf Lumber is vacant. Make me wonder about the long range plans for Gulf Lumber near Three Mile Creek.

A business that can be touted as a job creator must not only hire locals during the construction phase, but also continue to employ locals long after construction of the project is complete. It must not only hire and train locals to do the job but also understand problems that might prevent those seeking employment from obtaining work and working to help locals overcome their challenges. Yes, businesses like Airbus are a good find for the Mobile community. They are clean, don't threaten the community and should provide lots of jobs for years to come. The automobile industry has found Alabama, let's see if we can get a factory to come to Mobile. We don't need the energy business here. Let's not sell ourselves short. I recently read where some younger members of the Rockefeller family have announced that they are going to start divesting from fossil fuels and invest instead in other forms of energy, to address climate change. Their feelings are that the earth needs to be protected from those that are on the  road to destroying it. The Rockefellers started Standard Oil which is now Exxon/Mobil, the largest energy company in the world.

A wild horse will try to throw off any rider it feels is a threat to its freedom. The earth is a living organism, and like any living thing will fight to survive. Hurricanes, floods, tornados and large lighting and hail storms are just a few example of the earth fighting back against man's attempt to destroy her. We need to all band together to solve this problem because as we all learned when we were young, "You don't mess with mother nature".