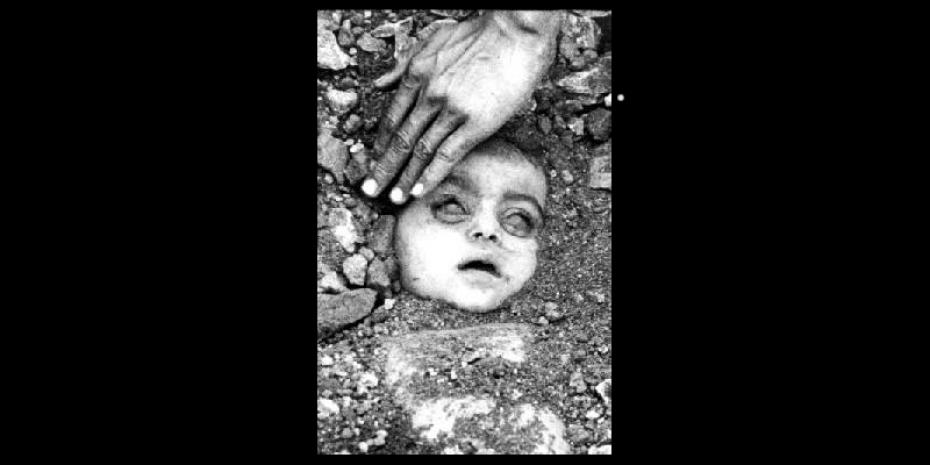 There's a lot of people who are disturbed about the picture of the young child on my Facebook profile. I am writing this, on the eve of April 28, International Workers Memorial Day, to explain why I keep that picture as my profile photo and also why Bhopal should never be forgotten:

I am a commercial fisherwoman from Texas and Union Carbide (now Dow) has existed outside my fishing village of Seadrift since I was born. I am 65. That’s a lot of years. I never knew about Bhopal until the day Union Carbide blew up near my hometown. The year was 1990. That’s when I first heard the word Bhopal.

A professor from New York City, named Ward Morehouse, showed up at my doorstep in Texas. He had been involved up to his neck with the situation in Bhopal and he asked me if I wanted to tell my story of Union Carbide in Texas to the people of Bhopal. I said yes, but I really had no idea what I was getting into.  I arrived in India exactly eight years after a very bad day. That day was December 4, 1984. Bhopal was the scene of world’s worst environmental disaster and I had arrived in India without a full understanding of what I was doing there. Yes, I understood that there was a Union Carbide plant in my backyard and one in Bhopal’s backyard. Was I here to be a witness to the horror that had happened in Bhopal? Witnessing is a real legitimate reason for being somewhere. But there were two billion witnesses here already! And all much better then me!

The only thing I knew without a doubt was that Bhopal was one huge puzzle with 2 billion teeny tiny pieces and I had one piece.

Permanent People’s Tribunal on human rights and industrial hazards. That was it. Ward Morehouse gave me the pamphlet to the event where I was speaking. I read on the back that the tribunal was based on the idea that the world had ample experience of industrial and environmental hazards and lessons had to be learned from these experiences so that those who died and suffered didn’t do it in vain. In other words, learn from the past so that a better world was possible. The best part of it was that the Permanent People’s Tribunal was not a government or an official document; it was a people’s statement that came from their experience of being forced to live with the consequences of industrial hazards and it was very very fitting that the tribunal was talking place near the heart of industry’s greatest darkness: Bhopal, India.

Every morning all of us delegates hopped a dusty bus from a rambling hotel and took a ride to an enormous beige conference center where huge black and white pictures of Gandhi hung on every wall and rioting bougainvillea spilled into the streets, up and down pathways, and over towering trellises. Between the heat, bougainvillea, chilies burning on the fire, and the wide-open skies I thought I was back in Texas. The governments were certainly alike.

Things changed on the sixth morning. Oh, we had our dusty ride on the crowded bus, all right, but that morning a tiny man in white shirt and shorts chased the bus down the road. He was hollering something with a high British accent and he was so close to the bus that it sounded like he was hollering right in my ear. I was taking it a little personal so I turned at the open bus window that was scoured with dirt and grime and a million fingerprints on the bottom half, but from the top half I could see him just fine. At that exact moment he decided to leap. For a second I thought he was going to bop me on the nose with his hand but instead, a knotted handkerchief flew through the window and hit me in the head. A white, neatly knotted handkerchief tumbled into my lap. I sat a moment, fingering the place on my head where the handkerchief had hit, and then I swung around to find that little man.  The man was standing stock still in the middle of the dusty road and getting smaller by the second. I whirled around to see if anyone had noticed my brief moment with the jumping man. Apparently not; it was just him and me in a brief one-on-one. So I unknotted the handkerchief, smoothed out the four corners, and then I flipped over what looked like a stack of photos. There were ten black and white photos of ten dead babies lying on white sheets smeared with blood. The babies were young. Very young. Maybe they were newborns. I looked closer. Did my babies look like that when they were born? Were they ever that small? Who were these babies and why were they so bloody? I looked around the bus and showed the pictures to a woman sitting next to me. There was a long silence. The woman turned her head and refused to look at the pictures. Finally, a man leaned across the seat from me and said that the night of the poison gas, women lost their unborn children as they ran. Their wombs spontaneously opened in bloody abortions. “These are those unborn babies,” he said. “They are the lucky ones. “  I found out soon enough who were the unlucky ones. They were sitting beside me in the conference center, sometimes filling the aisles and the hallways, and almost always, sitting on the steps when I went inside. They wore bandages and scarves around their heads and covering their eyes, but the ones with charred lungs and poisoned kidneys had no bandages. They simply pulled their shirts, scarves, and shawls tight around their bodies and resigned themselves to misery while, I supposed, the bureaucrats and corporate dogs fattened themselves on skullduggery and dirty deals.

I didn’t leave India lightly because there was no forgetting those babies. I felt like I had been hit with a train or maybe that old man in the white shirt and shorts had hit me in the head harder than I thought. I didn’t know for sure. All I knew was that those dead babies with their frail arms flung across the white sheets seemed a whole lot like my own sleeping babies in their cribs at night and when I got back to Texas, their tiny fists pounded me in my dreams and railed against me forgetting. I will never forget. Those ten dead babies are permanently branded in my brain. My thoughts and heart is forever with the survivors of Bhopal and the 25,000 who died. You will not be forgotten.