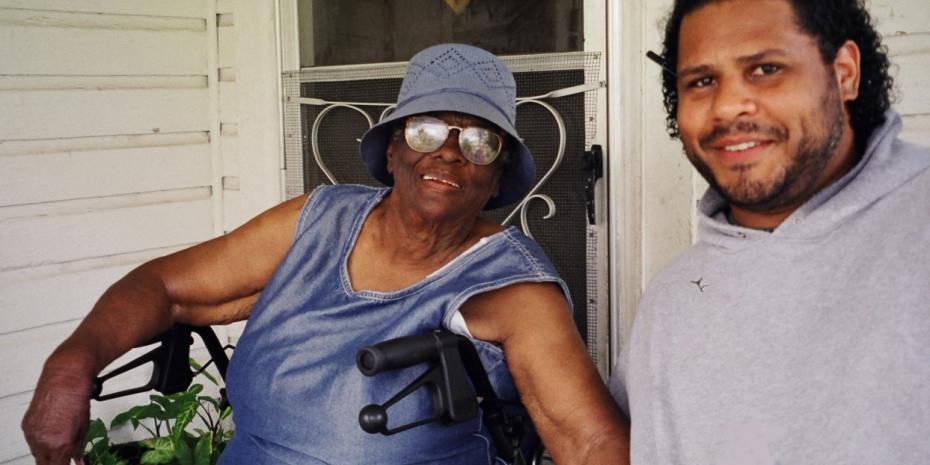 Over the course of twelve years, I documented the struggle to save a coastal Mississippi community from rampant development, industrial pollution and disaster. I learned recently that someone very special, and a powerful voice in Come Hell or High Water: The Battle for Turkey Creek, died on the day before the film was broadcast.

In the film, Eva Skinner visits the community cemetery with Derrick Evans to look for the grave of her son and finds that the area has been bulldozed beyond recognition. When I heard she had died, I thought about how people have responded so strongly to that scene, and I thought about so many other moments with her that aren't in the documentary.

(You can view Come Hell or High Water until May 30 at this link: http://bit.ly/TurkeyCreek.)

One story that is vivid in my mind is how Miss Eva supported her nine children as a single mother in the 1940s and '50s. For thirteen years, she worked a day job doing laundry in Gulfport and a night job at a hotel in Biloxi. When her job in Biloxi was finished at 2 a.m., she walked home to Gulfport, more than twelve miles, where a neighbor was watching her children.

My experience of Miss Eva was of warmth and joy, yet she experienced so much tragedy in her life. She raised her children alone because her husband, Lee Skinner, was killed in 1943 in an explosion at the Phoenix Naval Stores plant, along with ten other men. Like the creosote factory in Turkey Creek that applied toxic preservative to railroad ties and utility poles, this plant employed African-American laborers in dangerous work processing the longleaf pine that fueled the coastal Mississippi economy. Lee Skinner and the others died while extracting turpentine from intensely heated pine.

The only way Miss Eva could identify her husband's body was by the contents of his pockets – a pocket knife and nineteen cents. After seeing them, she fainted. When she woke, she didn't want to live because she only had 75 cents to her name and didn't know how she was going to take care of her children. But she found a way, working for 30 cents an hour, walking about 25 miles a day, and building her own home with the help of her young sons. That home was destroyed in Katrina and Miss Eva then lived in a FEMA trailer for a couple years.

Each time I watch the film I experience all that isn't there – the many precious moments and characters that didn't make it into the documentary. Come Hell or High Water was unexpectedly shaped by our nation's worst natural and man-made disasters and it was a daunting challenge to find a way to weave the events in Turkey Creek into a cohesive whole. Part of the process of finding the strongest narrative is letting go of material that holds great value.

In this digital age, thankfully, it is possible to find other ways of featuring some of that footage. When the Independent Television Service (ITVS) asked me to create a short video from some of the outtakes, I chose to focus on an important environmental justice story in Turkey Creek that is only briefly mentioned in the film.

"Toxic Legacy" is a five-minute video about the creosote factory in Turkey Creek. The factory was built in the community at the turn of the century, when the community matriarch, Melinda Benton, sold land to the Gulfport Creosoting Company on the condition that local men were employed there. It is part of the community's proud history of self-determination, but also a story tainted by poverty wages, physical harm to workers and environmental degradation.

My hope is that the video will be useful to communities working to address environmental justice and public health challenges, and I dedicate it to the memory of Eva Skinner.

For additional Teaching Resources related to the film, visit ComeHellorHighWaterFilm.com.