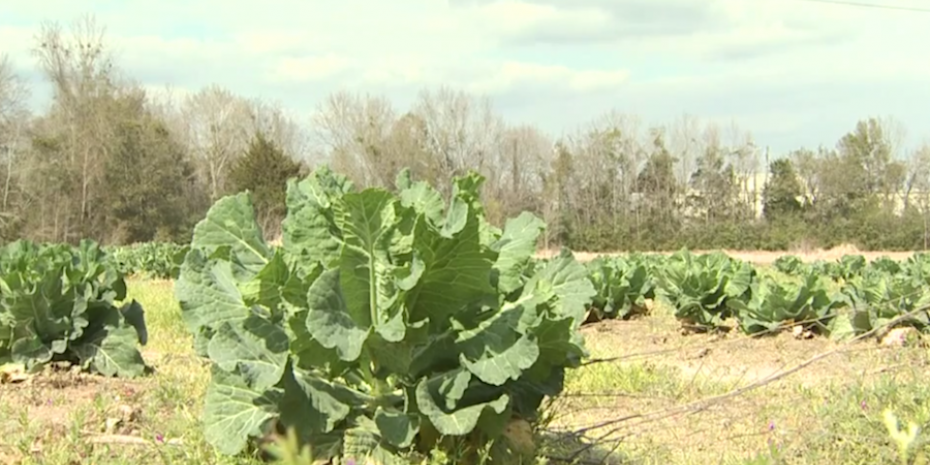 The Africatown Community proudly showcased its Community Gardens with a ribbon cutting ceremony to kick off its first Share The Harvest Day Celebration. In attendance to help celebrate the occasion were Sam Colvert, Regional Manager for Alabama Power; former Mayor Sam Jones; current Mayor Sandy Stimpson; Director of Community and Housing, Nigel Roberts; Councilman Levon Manzie; School Board Representative Reginald Crenshaw; Prichard Community Development Officer Helen Wright; and Mayor Stimpson's sister with her entire family. Sam Colvert mentioned that there are other Community Gardens located on Alabama Power right of way in other area's of the state, but Africatown's Community Gardens are the largest and best kept of any in the state.

Former Mayor Jones said that he is proud of how the community has kept going what he helped get started years ago. Mayor Stimpson said that he was surprised at how large the garden area is. Most Community Gardens he has visited are of the backyard variety. Africatown's Community garden is more than 4 acres large. Nigel Roberts said that he looks forward to doing anything he can to move the Africatown community forward. Councilman Manzie was there to help cut the ribbon and said he is always here to help and keep the community moving forward. Dr. Reginald Crenshaw mentioned that he and the School Board are set to announce an important financial expenditure for Mobile County Training School. Helen Wright represented the City of Prichard because of their donation of flowers to the garden area. Mayor Stimpson's sister and here family were there to enjoy the celebration and showed tremendous interest in the tourist potential of Africatown.

The history of Africatown's Community Gardens goes back about 55 years. The northern portion of  the Plateau section of Africatown, between Jakes Lane and Paper Mill Road, was known as "New Quarters". Rental Houses owned by the Meaher Family were occupied for years until a lack of upkeep by the owners allowed them to fall apart. After the houses were removed part of the land was sold to Alabama Power as a power line right of way and another section was purchased by the State Docks. Around 1960 Mr. Joe Sellers and others in the immediate area begin planting crops on the Alabama Power right of way. Some of the crops they would harvest for themselves some they would sell and some they would give away to anyone in need. That practice continues today. The community of Africatown is considered a "Food Desert" because there are no grocery stores in the immediate area. There are disabled military veterans and elderly that depend on crops from the garden to supplement their monthly food bill. The peppers from the garden (Africatown Hots) are rumored to have healing powers and will improve your energy levels when cooked with rabbit, coon and opossum.

The Community has plans for that vacant section of land located between the Community Gardens and Paper Mill Road. Those plans are to establish a farmer's market behind the Community Gardens facing Paper Mill Road. That Market will help the community sell more of its crops to the public and assist in the financial stability of the community and its people.  Some of the people involved in the development and upkeep of the community gardens are, Joe Sellers Sr., Laurence Buford, Thelma Maiben and her mother, June Bug, Ronnie Perine, Mike Mitchell, Cleon Jones, Charles Hope and Michell Howard.

There is however, a dark cloud hovering over the Community Gardens as it does over other parts of the Africatown Community. That cloud exists in the form of the energy business that is bulling its way in the area. This week a request will be presented to Mobile's Planning Commission to re-zone from residential to industrial that area the community would like to develop as a farmers market. That area has always been zoned residential and should never change. Their business plan would construct warehouses in that area and ruin the historical value of the entire area. In addition, it would obstruct sunrays on the crop during certain hours of the day. If businesses are allowed to re-zone areas of Africatown where houses do not exist the historical and tourism value of Africatown will be ruined. A browse through the internet recently revealed that the power plant located next to Berg Pipe is for sale. I can only guess as to who one of the bidders will be for that property. If the energy business obtains it there will be another request for more tar sands storage tanks to be built in the area.

It becomes more and more evident every day that a strategic business plan developed years ago without any input or knowledge by the Africatown Community, or someone with the communities best interest at heart, is being implemented at a rapid pace with no regard to the African-American residents living there.