Anticlimax at Climate Conference: Paris Glitters and Leaves the Work to the Gritty 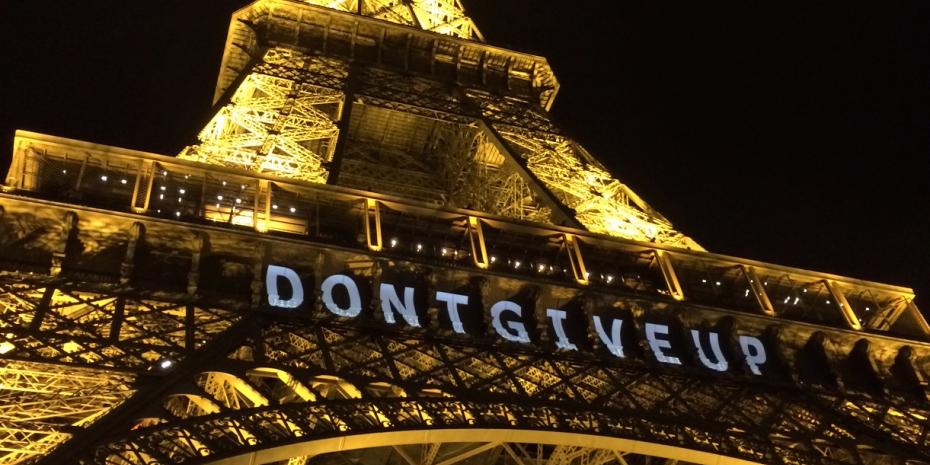 MOBILE, Ala. – If the road to hell is paved with good intentions, the Paris climate conference just built an eight-lane freeway to Hades.

Leaders and nerds from 195 countries sifted through separate plans for saving the species from itself and tried to meld them into an agreed text about shrinking the world’s use of fossil fuels. The science prodding this effort says without such shrinkage the earth will become a crock pot.

Whether slowly simmering or soon roiling depends on how swiftly the burning of these fuels is reduced how much. With little or no reduction the planet becomes a seething sauna by the end of this century, according to the gloomy projections, and the ways of life now considered normal become wistful memories—if anybody survives to have memories.

With a modest reduction average temperatures continue to rise, abrupt climate changes occur, polar ice melts, low islands and coastal cities vanish under rising seas, and earthly life retreats inward to survive in some harried fashion. Even with a sharp reduction some of these jolts happen, because combustion of fossil fuels has already belched such a volume of greenhouse gasses that they will haunt the atmosphere like ghosts for centuries.

So the negotiators in Paris produced a text calling for the world’s nations to adopt plans drastically lowering the spew of greenhouse gasses and avoiding the ruinous results of continuing as before. And all delegations at the conference solemnly swore to go home and do this — while taking care not to create any enforcement mechanism or to impose any penalties for failure to carry out these duties, or even provide a reliable way to help poorer countries pay for complying with the recommendations.

Only an incurable optimist could consider this good news. The intentions are glorious, the enactments are vaporous.

But that doesn’t render the conference a failure. It will be a success if all it accomplishes is squelching the doubters and deniers.

This statement makes sense only in America, where politicians with lapel flag pins compete over who can appear most sincere while saying God bless America and calling this the world’s exceptional country. And it truly is exceptional about climate change and global warming. Nowhere else is this a contested and clamorous issue. Other places debate what to do about it, but they don’t doubt it’s true or that human activity is largely responsible for it. In the U.S. alone are doubters and deniers epidemic.

Thanks to the Paris conference and the text it emitted, these holdouts against evidence and reason will become more beleaguered at Fort Denial. The whole world has risen against them and has them surrounded in their isolated outpost.

This will help locales where denial reigns, like the oil drilling, shipping, refining arc of the Gulf coast. Its decades of marinating in oil has produced an economic and political structure so dependent that anything else is nearly unthinkable. Paris gives a boost to folks trying to inject other ideas into the region.

One of those ideas is that it’s foolhardy—verging on suicidal insanity—to continue drilling for oil in the Gulf. That’s risky for the water and workers, as BP’s erupting well showed, and it furthers the fossil fuelish doomsday foretold in Paris.

But the choir of the faithful still sings that old favorite hymn popularized by Sarah Palin: “Drill, baby drill!” They will assemble for a performance in New Orleans this March.

The occasion is a auction of leases for offshore drilling. This is the next sale in a 5 Year Program peddling many millions of acres. The March auction will welcome bids on “all available unleased areas in the Central and Eastern Gulf of Mexico” according to the federal Bureau of Ocean Energy Management.

Its website says these tracts include some beneath 11,000 feet of water. That’s more than double the depth of BP’s fated well. The water pressure will be much greater there, as will the difficulty of coping with any mishaps. Supposedly this has all been addressed by the industry and the regulators. That was also said before the BP well blew.

Some Gulf coastal locals were among marchers in the Parisian streets insisting on tougher measures against global warming than the dignitaries inside the conference were aiming for. They are back now and they’re aware of the lease sales looming in March.

As the date approaches some things will be done to alert the public and rouse opposition to the sales. The billions in fines and compensation due from BP for its negligence will likely get stirred into this discussion.

Multiple contests are underway to snare shares of this bonanza. Interests in Alabama’s capital Montgomery seek to siphon the state’s portion into the general budget and disperse it statewide. Business and political potentates along the Alabama coast, arguing that their region was most assaulted by BP’s wayward oil, are angling for the biggest dole. Some of them have said they would use this money for roads and bridges, plus enlarging the bay channel to bring more and bigger ships to Mobile’s docks.

These are projects designed to burn more oil by increasing highway traffic and to produce more oil by inviting more tanker ships and offshore drilling service vessels to ply the harbor. Yes, the desire is to deploy the windfall from the BP oil calamity to aggravate the addiction that brought on the calamity.

Instead of this sickly spiral, the bulk of the BP bucks could fertilize the growth of an alternate, unfossilized energy economy. Investors in the old greenhouse gassy ways won’t resist such a switch alone. They will have allies among the workers who feed their families and pay their bills with paychecks from oil jobs.

That’s why any attempt to advance plans in keeping with the Paris accords must plainly have a role for these workers in the replacement future. Schemes that seem to simply discard these people will be opposed and defeated. To be born the alternate economy must offer jobs that are visible, believable and simultaneous with dismantling the decrepit one.

The BP billions can finance this transition. But they won’t become available by magic or mere persuasion. They will have to be wrested from the interests now grasping for them and turned by other hands to other purposes.

A campaign against the lease sales might launch this rebirth for the Gulf coast. No other locality on earth will duplicate the circumstances here. Every place will have its unique combination of challenges, grievances, resources and prospects for pursuing alternative lives.

Together in spirit and motive, if not in specific tactics, these places can combine their quest. That’s how the visions written into the Paris text could be enacted. The officials at the climate conference produced no mechanism to reach their professed goals. People at the gritty level around the world will have to do that. There is no other way it will happen.