The Oberlin Express Returns to Africatown 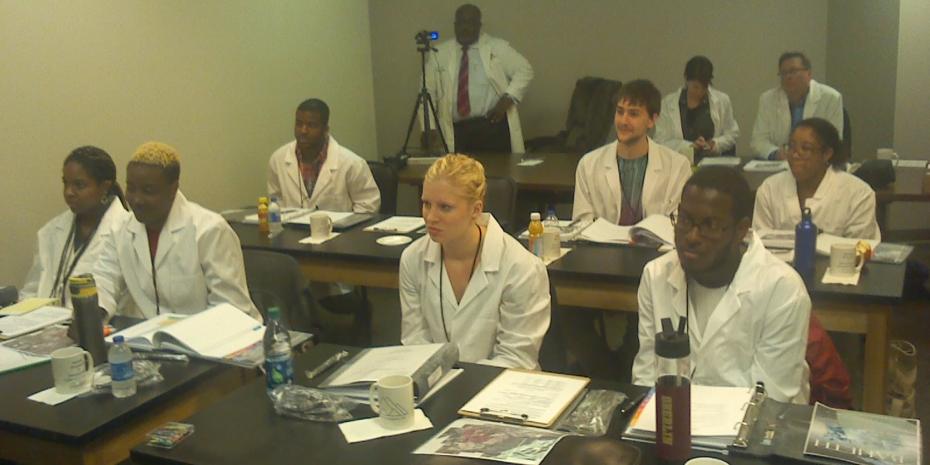 On October 18, 2015, two vans carrying students, teachers and their supplies arrived in Mobile from Oberlin College in Cleveland, Ohio, to learn more about Africatown and assist ongoing efforts to help revive the community.

This was their second trip to Africatown in the past year, which indicate how serious the students, teachers and their school are about how they feel about Africatown and how much they want to see something positive happen for its residents.

This year's activities were centered around conducting medical surveys for those in the Magazine Point and Happy Hills sections of Africatown. The students were guests of Dr. M.A. Baheth and Dr. Raoul Richardson, of Baheth R & D Laboratories Ltd, and spent the first two hours of each day in the research lab learning about the art of being a research scientist.

Oberlin College has a rich and proud history of being in the front of social change in this country as Oberlin was the first major college to admit women and blacks to enroll and be accepted at their school. One of the college's long range goals is to develop a program that will allow colleges and universities to send students to Africatown to help the community. Students would receive classroom credits for their community work. Once this happens there will be students coming in to help on a regular basis.

The students arrived this year in the mist of a week-long array of activities highlighted by The NAACP State Convention and a visit to Mobile by Dr. Robert Bullard, "The Father Of Environmental Justice". The NAACP sponsored a community rally, a protest demonstration downtown and a protest march all against industry's attempts to build more storage tanks around the community and invade the community with warehouses and old military equipment.

Once in the field, the students went door to door asking residents about their personal health and their family health history in Africatown. They quickly found out the the best times to do the surveys were between 3 - 6pm, as most residents worked and were not available before those times. Last year's surveys in the Plateau area had revealed the same thing which is why we scheduled classroom activities for the morning hours. The residents were very friendly and happy to answer any question asked of them by the students. Many had heard about the surveys, but felt overlooked because last year they had not included.  One problem residents of Magazine Point, Happy Hills, Kelly Hills and Lewis Quarters have is often times they are omitted from things going on in Africatown because Plateau is the largest section and things are not filtering down from there.

On several occasions, students could be seen playing touch football with kids in the streets. The students noticed that there were lots of large mosquitoes that appeared each day around 5pm. The appearance of the mosquitoes seem to coincide with a foul smell coming from the sewer treatment facility located near the intersection of Bay Bridge Road and I-165 in Prichard. The smell was so bad I began bringing a hospital surgical mask to try and filter that terrible smell. Residents in the area has to endure that smell each and every day.

The students very much enjoyed their dinner with Dr. Robert Bullard, who expressed some of his views about the environment and how everyone must do their part to preserve and protect everything that existed before humans appeared on earth to include protecting ourselves from ourselves.

One apology I want to make to the students is for a promise not kept to insure they made a trip to the Alabama beaches. I promise that for the next group, weather permitting, they will hit the beaches before any classroom or field activities begin. After all, they will be on spring break.

Let the history records show that for their second trip to Africatown, the Oberlin Express consisted of:

Thanks again for your help and we all look forward to your return trip in the near future.