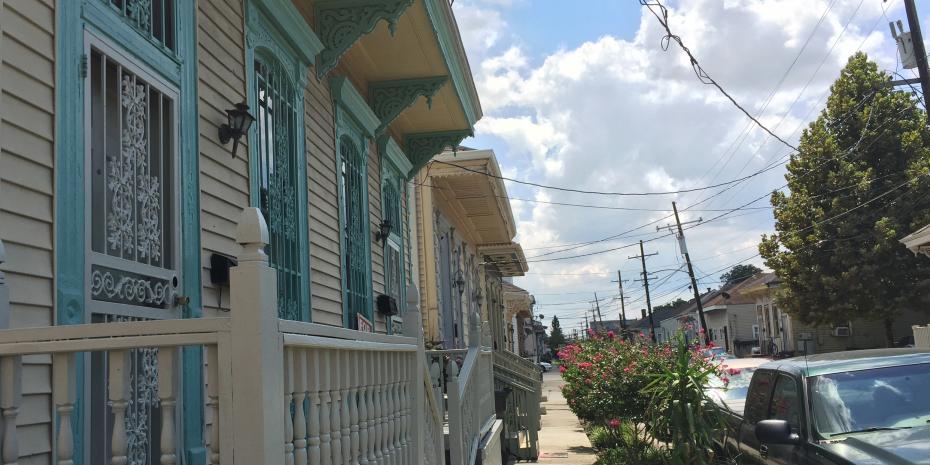 LaShandra, who did not want her last name used, was standing on her porch just off of St. Claude Avenue in New Orleans’ St. Roch neighborhood. A few blocks away, the tenth annual Katrina march and secondline, billed this year as the “biggest secondline ever,” wound its way from the site of the Ninth Ward levee breach to Hunter’s Field.

But LaShandra wanted no part of it.  Sure, she’d made it back to the city, but she saw little reason to celebrate.

Like thousands of others, LaShandra and her four children sought shelter in the Superdome when the city flooded in the wake of Katrina. The family eventually landed in San Antonio, where they stayed for two years. They spent another three in Houston.

“I don’t think they ever wanted this community to come home,” she said in a soft, pained voice.

“This,” she explained with a wide sweeping gesture toward post-Katrina New Orleans, “is designed for the rich to stay rich and the poor to stay poor.”

She fought tooth and nail to come back and finally made it home in 2010, after five years away. Like many displaced New Orleanians, LaShandra said she found it almost impossible to find a job outside New Orleans.

“When I opened my mouth, they heard New Orleans," she said, referring to her distinctly New Orleans accent. "And if they thought we were from New Orleans, they’d shred our applications before we could get out the door. Then I come home, I get a job within a month. But see, you have to be in the right industry. I work in the tourist industry, in a hotel.”

Getting a job in the hotel industry was easy, she explained, but paying the rent on a hotel job is another story.

Before Katrina, she said typical rent in the neighborhood was around $350 a month. Now landlords are asking $800 - $1,100 or more for the same same size place.

LaShandra wishes her kids could have stayed in the Texas schools.

“We found out that our children’s curriculum was so low compared to other states. I went to Texas. My children couldn’t keep up in Texas. The schools were better, but,” she paused to emphasize again, “I couldn’t get a job in Texas. And we had to eat.”

This year, two of her children will travel across town in hopes of a better education. She said New Orleans has a long way to go when it comes to improving its schools.

“I can call the name of five schools they haven’t built back. They didn’t invest in the school system. When I was little, you lived here, you went to school down the street. Now, you have your children, you’re living here, your child might go to school way uptown.  Why are these children going to school that far away from their house? How parents supposed to be up to the school?  It’s impossible - they’ve got the children scattered everywhere.”

And with the beginning of a new school year came yet another hurdle.

“Now they’re telling me my children need a laptop – do you know how much a laptop is?”

LaShandra wonders about what the future holds for her children and her neighborhood.

“If you want your people to come home, you gotta do more for your people,” she said solemnly.

“I hope a hurricane don’t ever hit no more. Jesus, I’m not lying. Because it’s gonna be over for New Orleans – they really ain’t gonna have nobody come back here.”