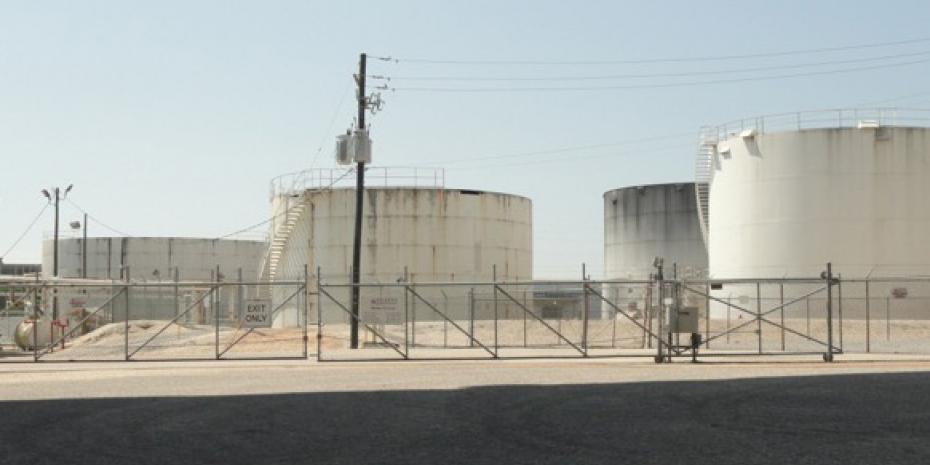 The "okey-doke, as defined by Urban Dictionary and Africatown folklore means to pull the wool over your opposition's eyes, to outsmart your opposition, to say one thing and mean another or to gain the upper hand by using trickery. President George W. Bush once famously said,"Fool me once shame on you, fool me twice shame on me."

American folklore tells of something that was said after the first Thanksgiving dinner. After that famous dinner, the chief of the Indian tribe and the head of the pilgrims went up to the top of the tallest mountain to drink wine and smoke the peace pipe. The chief bragged about how beautiful the scenery was from their mountain top view. The pilgrim asked the chief how much of this beautiful land belonged to his tribe. The chief pointed in every direction and said, "As far as the eyes can see north, south, east and west."  The pilgrim replied, "Really, let me see your owner's papers on your property."

Above:  Existing oil storage tanks near the Africatown community (photo by Karen Savage)

The founders of Africatown self-segregated themselves from the larger white community and limited their contact with other former slaves that had already been in America for generations. The group maintained as much of their African identity as possible by using their own language among themselves, maintaining customs, buying land collectively, electing their own judges and choosing for their leader someone who had been a member of Dahomean royalty, Gumpa (Peter Lee). Gumpa was born in the early 19th century and was descended from kings Agaja, Glele and Guezo and was a contemporary of King Benhazin.

As time went by, they bought land from their former slave master and eventually built homes and established a judicial system based on their own laws. They established a medical team that was lead by a medicine man named Jabez. Those early leaders of Africatown took good care of the residents of Africatown and were careful not to sign any documents or make any agreements unless the lifestyle of all Africatown residents were improved.

I can remember meetings held in my grandfather Isiah Brown's home concerning whether or not Africatown should vote to become part of Prichard or Mobile. They all decided that Africatown should be part of Mobile because Mobile promised to pave the streets and install water and sewer throughout the community. The city of Mobile did what was promised but has not done much since.

The only things built in Africatown since 1970 have been a community center and swimming pool, and those two items were built with federal funds. The community center was constructed on grounds that once contained the original Whitley Elementary School, which was allowed to fall apart after Mobile's public school system refused to spend money on the facility to keep it going.

Community leadership has changed since the 50's. No longer do communities rely on a group of locals to keep them informed and keep them safe. There are still those within the community that have a voice in community affairs, however every section of the city now elects politicians on the local, regional and state level to keep them informed and safe. I can remember when Mobile had three city commissioners and they all lived in the same neighborhood.

Now Mobile has seven city commissioners, all living in seven different parts of the city and representing seven different districts.  It takes a super majority of five votes to get anything done in Mobile, which is good. It means that those in charge must work together to get things done.

The proposed storage tank ordinance on the table for Mobile will affect the Africatown community more than any other community in the city because Africatown has a mixture of residential and industrial zones with only streets used as buffer between the two. The proposed ordinance, as written, is not acceptable.

The ordinance contains wording that would allow storage tanks to be constructed next to schools, churches and homes. It also would allow additional storage tanks to be built in an area without notification and without asking for a permit. The proposed ordinance also does not mention anything about insurance, evacuation plans or safety requirements.

That's not to mention the fact that to allow the construction of a super oil storage tank city in Africatown would destroy the plans Africatown residents just spent six months preparing for the future of the community.  Any proposed ordinance should begin with a buffer of 3,000 feet from the edge of any industrial zone to the closest residential zone.

Africatown residents recently had the wool pulled over their eyes when they agreed to let the Cochran Bridge be extended, thus allowing more than half of Magazine Point to be rezoned to industrial, which resulted in a loss of homes and residents. It happened again when an oil pipeline was allowed to be installed underneath the schoolyard without any yearly royalties going toward the upkeep of the school.

To approve the current proposed storage tank ordinance as written would amount to having another "okey-doke" pulled on the residents of Africatown. The residents spoke loud and clear in a public hearing held at the Hope Community Center and responded with a loud "No More Tanks on Our Banks" at that hearing. I am sure all elected officials heard them and will vote appropriately. After all, would you like to live next to super oil storage tanks?