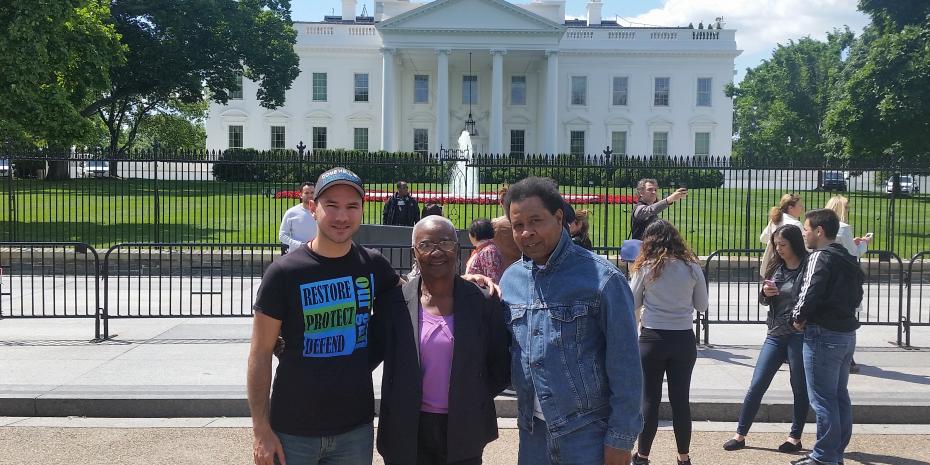 Groups from Houma, LA, New Orleans, LA and Pascagoula, MS joined us in DC to represent the gulf coast. Groups from both North and South Carolina represented the Atlantic coast and a large contingent from Alaska represented the Alaskan coast. Together we led a loud and vocal group of about 1,500 that marched to protest the continued leasing of plots along North America's coastline for oil drilling and exploration.

The proposed Keep It In the Ground Act of 2015 would take the important step of keeping over 90 percent of the potential carbon emissions from oil, gas and coal on our federal lands and federal waters underground forever. Specifically, the bill would:

Offshore drilling worsens chronic environmental justice issues and poses a particular threat to the way of life for residents of the gulf coast, leaving residents to figure out how to maintain traditions and cultural identities. In South Louisiana, indigenous groups are already relocating from their historical homeland due to sea level rise.

Historic African American communities are having to relocate due to the poisoning of their land by refineries and the combination of toxic exposure during extreme weather. Gulf coast communities, such as Africatown, must face the impacts of off shore drilling while also navigating oppressive historical and contemporary government policies and struggling with poor socioeconomic conditions.

"Public input" was an important phrase I heard over and over again from politicians and others about future policy considerations. During my visit with representatives from the Congressional Black Caucus, I learned that efforts are being made to establish an Environmental Justice Caucus. When that happens, public input will play an important role into the initial things they do.

One might ask the question, "How does the denial of oil and gas drilling along North America's coastal areas positively affect a historic African-American community such as Africatown?"

Well, to answer that question you must first know and value the historical significance of Africatown. Africatown is the place where the last shipment of slaves landed in America in 1860 - fifty years after the slave trade in this country had been outlawed.

Later, International and Scott Paper companies moved into Africatown and polluted the community for almost 60 years. The Environmental Justice Act passed during the Clinton presidency forced those two industries to stop polluting and close down. From about the year 2000 until today, most of the land previously occupied by International Paper has remained vacant.

Recently, the oil industry has had their eyes focused on that vacant property and proposes to construct a storage tank city that would house about 50 large storage tanks and store dangerous and volatile tar sands oil. The tanks will emit toxic and dangerous fumes and could explode if ignited.

If offshore oil drilling is reduced, the demand for oil in this country and around the world might be reduced. If the world's demand for fossil fuel is reduced, the need to construct more oil storage tanks might diminish to include those planned for Africatown.

President Bill Clinton's Executive Order 12898 on environmental justice helped to clear away pollution in Africatown. Wouldn't it be ironic if Hillary Clinton used the same environmental policy to save Africatown from future pollution?