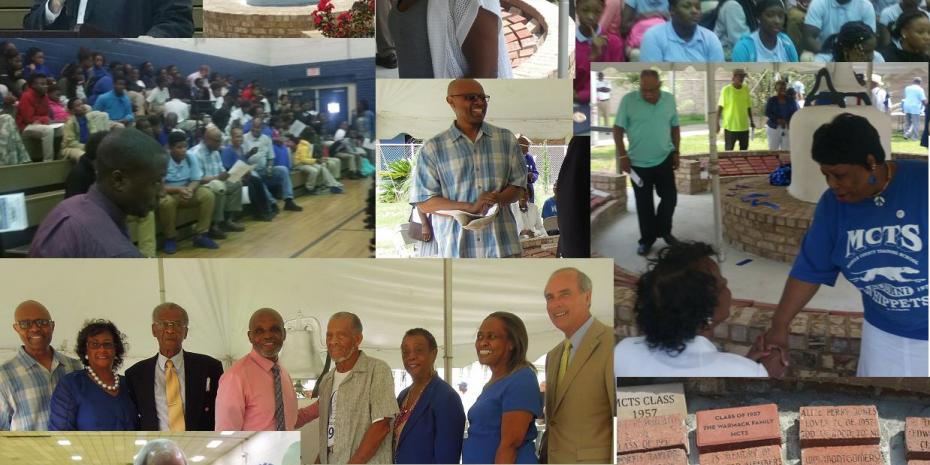 Thanks to the dedicated efforts of the Mobile County Training School Alumni Association President Anderson Flen and the hard work of alumni George Jackson, Isaac Jones, Cleophas Armstead, Curtis Malone and Alphonso Fairly, the historic tradition of Africatown's freedom bell will live on as a new bell was dedicated on the campus of historic Mobile County Training School on August 23, 2017.

Honored guests were Mobile Mayor Sandy Stimpson and Mobile County Public School System Superintendent, Mrs. Martha Peek. A very noticeable and important statement make by Mayor Stimpson included the phrase,"There is no reason why Mobile County Training School should not be a small 1A or 2A public high school. All that is needed is to fix up the old vacant houses in Africatown and place young families in them."

I agree. There are several high schools in Alabama that have around 500 students.

The history of Africatown's freedom bell dates back to July 8, 1860 with the landing of the slave ship The Clotilde, which carried the last recorded shipment of slaves to the United States. Legend has it that the bell was the only item saved from the Clotilde before it was set afire and sank in the Mobile River.

The bell was given to the slaves that settled in Africatown and eventually placed in the church they started, the Union Baptist Church located in Africatown. That original bell was presented to Mobile County Training School in 1915 by a group of young men, the R.H. Benner Social Club.

The bell has been through two fires. The first was the burning of the church. When new buildings were constructed at the school in 1915, it was placed at the school. In 1938, the school burned and the old bell was again a witness to tragedy. It was repaired and painted by the "Just Us Club". Each stroke seem to remind us of its grim past.

Originally, the bell  rang in the morning to begin the school day and again in the evening to denote that the school day was over. The bell could be heard throughout the entire Plateau neighborhood and served as an important timepiece for those mothers in the area monitoring the movement of their children.

Someone would often ring the bell to notify everyone about a house fire in the area and it was used to notify local residents when heavy ash was coming from the smoke stacks of the local paper mills. This was important if a family had clothes hanging outdoors on the clothes line using the sun to get them dry.

In 1940, the "Just Us Social Club" was the only all boys club at Mobile County Training School. The club had several distinctions which made it outstanding, including winning the annual Jabberwock for two consecutive years and the carrying out of many serviceable projects each year. It was during that period that the bell became the symbol of a winning tradition.

The bell would ring after each winning sports event. Whenever the school traveled out of town for a sporting event, the bell would be rang by the first person to arrive back to Africatown, if The Whippets were victorious.

As a young child, I was allowed to stay up late to hear that bell ring to signal that the Whippets were victorious. Once, I was up at 1 am when my mother asked,"son why are you still up?"   I answered,"I am waiting to hear the bell ring." She said,"well, I guess we lost." To which I replied, "no mama, the Whippets never lose."

In the early 1990's, modifications and improvements were being made to the entire Mobile County Training School campus. At that time, the bell looked bad and needed repairing. The bell was removed from the school's campus by employees of the Mobile Public School System and -- we were told -- placed in a school system warehouse to be repaired and returned to the campus of Mobile County Training School. However, the bell was not returned and seems to have vanished from the face of the earth.

In a recent meeting of the Alabama Commission of Historical Places, held in Opelika, Alabama, it was noted that if a community had ten or more historical structures or sites, that community would be an excellent place to promote tourism. Well, thanks to the efforts of several organizations that support the Africatown Community, the following sites are available for tourists to visit:

1. The Historic Africatown Cemetery, where the remains of some of the last shipment of slaves to be imported to the United States are buried

2. The Historic Union Baptist Church, which was the church founded by that last shipment of slaves

3. The bust of Cudjoe Lewis, who was the last imported slave into this country to die -- in 1935

4. Historic Mobile County Training School, the public school that in 1880 was founded by that last shipment of slaves in and was the first training school for blacks in the state of Alabama

5. The Africatown Freedom Bell, the only item saved from the Clotilde, the slave ship the bought the slaves to the United States

6. The Historic Mobile County Training School Museum, which is located on the school campus, maintained by the Alumni Association and contains several historical artifacts

7. The Plateau and Magazine Point neighborhoods, founded by that last slave shipment and incorporated in 1870 with laws that resembled tribal laws from Africa

9. Africatown Community Gardens, founded by Africatown residents and believed to be one of Alabama's largest community gardens with six acres of land

10. Clotilde Landing, located along the Mobile River under the Africatown Bridge, where the slaves first settled after they were set free, currently, the site is used by residents for fishing and picnicking

11. Hog Bayou, the land along the Mobile and Chickasawbogue Rivers where the freed slaves found plenty of fish and game to feed themselves

Africatown was placed on the National Register Of Historic Places in December of 2012. Since that time there have been several non-profit organizations that have come to the aid of the Africatown community to help it survive, grow and be environmentally friendly.

In addition, there is one more I would like to add to that list, C.H.E.S.S. which stands for Clean, Healthy, Educated, Safe & Sustainable Community, Inc.  C.H.E.S.S. is supported by the Deep South Center For Environmental Justice located in New Orleans, which was founded by Dr. Robert Bullard from Texas Southern University and Dr. Beverly Wright from Dillard University and funded through the Kellogg Foundation.